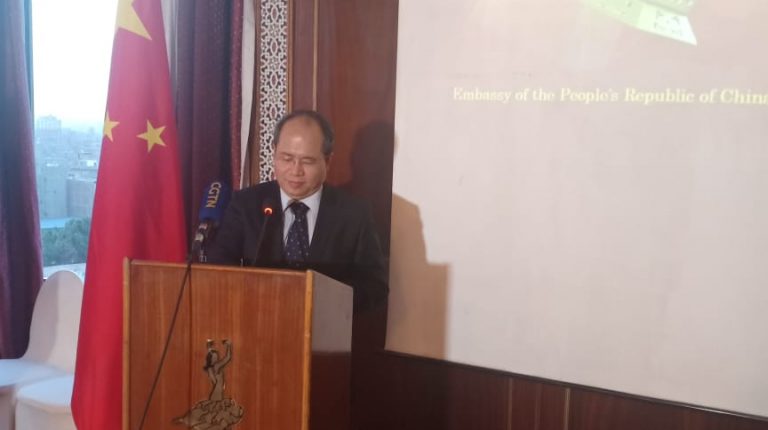 Huawei Technologies is cooperating with Egypt’s ministry of youth and sports in organising security arrangements of the 2019 Africa Cup of Nations (AFCON) that will take place from 21 June to 18 July, said, Xiao Jun Zheng, China’s Chargé d’Affaires to Egypt.

“Huawei established its branch office in Cairo many years ago and provided the Egyptian market with very effective, economic, and technical solutions,” Zheng told Daily News Egypt during the event that was organised by the Chinese embassy in Egypt last Sunday.

The 2019 AFCON is a very big event where Huawei is engaged in the security information and providing of  very useful and competitive solutions to help Egyptian friends to successfully deal with security checks, he elaborated.

Earlier in April 2019, President Abdel Fattah Al-Sisi said in his speech in the second Belt and Road Forum for International Cooperation that he will do his best to make Egypt one of the international centres for IT industries, Zheng said, adding that Al-Sisi’s IT proposal offered a great opportunity for both countries’ companies including Huawei to boost their IT cooperation.

Additionally, the United States has moved to restrict Huawei’s ability to trade with US firms in May 2019, shortly after reigniting the trade war with tariff hikes. The latest blow to the Chinese telecom giant marks a grave escalation in the US-China power struggle, according to global media reports.

Zheng commented that China has to deal with the trade war with the US, adding that the US protectionist actions are threating global economic growth and conflict with the World Trade Organisation (WTO) rules.

“China and the US are the world’s biggest economies and it is normal to have disagreements that should be solved with dialogue,” he affirmed, noting that Huawei is a successful model for private sector companies.

Economic cooperation between Egypt and China is remarkably developing in light of the joint exerted efforts and the support of both countries’ political leadership, China’s Chargé d’Affaires to Egypt said.

Zheng expected that Chinese President Xi Jinping will visit Egypt for the second time this year or in 2020 according to the president’s schedule.

“China and Egypt are strategic comprehensive partners who enjoy a very close and friendly working relation. The Chinese president has already visited Egypt in 2016 and I am sure that he would like to make his second visit to Egypt soon,” he noted.

Chinese construction companies are engaged in many projects in Egypt specially in the New Administrative Capital and others for the tallest building in Africa, in addition to other projects in the fields of transportation and energy, he stated.

Trade exchange reached $13.86bn in 2018, he added at the iftar event that the embassy held on Sunday, affirming that 2018 was a fruitful year for Egyptian Chinese relations. Both countries achieved important development for cooperation in various fields, he added, noting that President Abdel Fattah Al-Sisi paid China his 6th visit in April 2019 to attend the second Belt and Road Forum for International Cooperation.

Chinese Muslims have contributed greatly to the diverse civilisation and development of modernity in China, he elaborated.

China and Egypt are two ancient civilisations, multi-national, and multi-religious, he said, affirming China’s desire of a peaceful coexistence between its different nationalisms.

The vast majority of Chinese Muslim brothers and sisters, like Egyptian Muslim friends, are overwhelmed by the festive atmosphere of Ramadan, he elaborated.

“Two weeks ago, the Dialogue of Asian Civilizations’ Conference was held in China, where Chinese President Xi Jinping stressed the importance of the universality of civilisation, exchanges, and mutual learning while friends attended the conference upon the invitation of China,” he said.