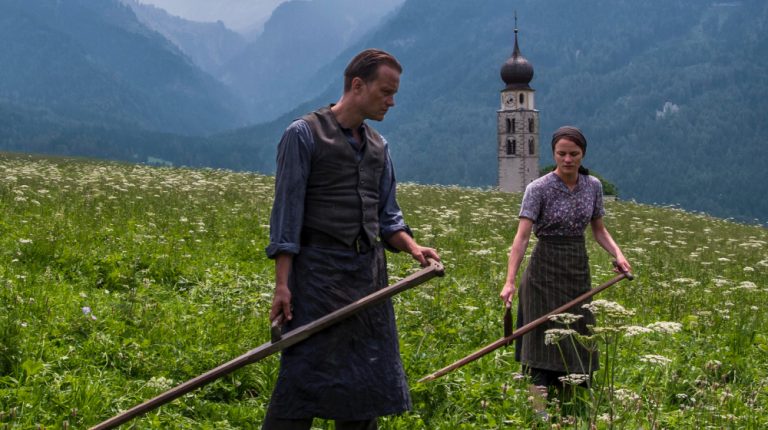 A Hidden Life follows the real-life story of Austrian farmer Franz Jägerstätter (August Diehl) who refuses to fight for the Nazis in World War II.

Born and raised in the small village of St Radegund, Jägerstätter is working his land when war breaks out. Married to Franziska or Fani (Valerie Pachner), the couple are important members of the tight-knit rural community. They live a simple life with the passing years marked by the arrival of the couple’s three girls.

Jägerstätter is called up to basic training and is away from his beloved wife and children for months. Eventually, when France surrenders and it seems the war might end soon, he is sent back from training. With his mother and sister-in-law Resi, he and his wife farm the land and raise their children amid the mountains and valleys of Upper Austria.
As the war goes on, Jägerstätter and the other able-bodied men in the village are called up to fight. Their first requirement is to swear an oath of allegiance to Adolf Hitler and the Third Reich. Despite the pleas of his neighbours, Jägerstätter refuses. Wrestling with the knowledge that his decision will mean arrest and even death, Jägerstätter finds strength in Fani’s love and support. Jägerstätter is taken to prison, first in Enns, then in Berlin, and waits months for his trial. 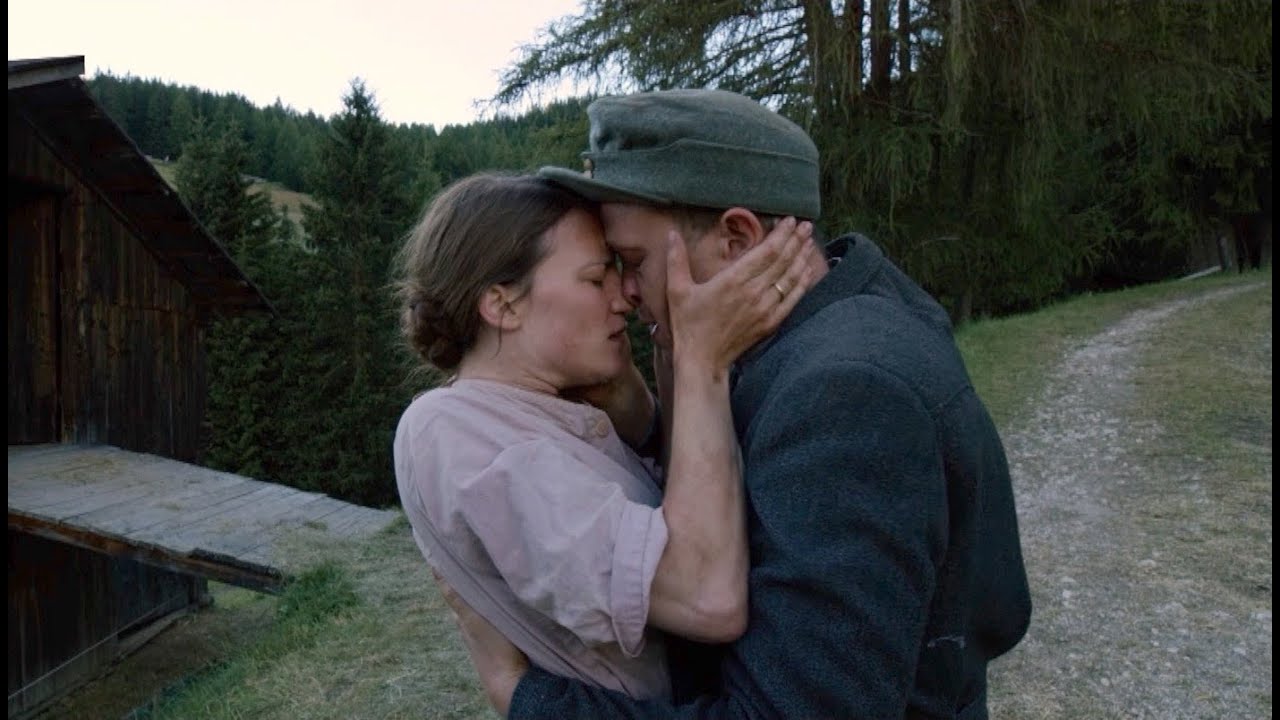 During his time in prison, he and Fani write letters to one another and give each other strength. Fani and their daughters are victims of growing hostility in the village over her husband’s decision not to fight. After months of brutal incarceration, his case goes to trial. He is found guilty and sentenced to death.

Despite many opportunities to sign the oath of allegiance, Jägerstätter continues to stand up for his beliefs and was executed by the Third Reich in August 1943 for his defiance in a garage at Berlin’s Brandenburg prison, while his wife and three daughters survive.
The motion picture draws on his exchange of letters with his wife Fani, edited by Erna Putz and published in English by Orbis Books.

The story was little known outside St Radegund, and might never have been discovered, were it not for the research of Gordon Zahn, an American, who visited the village in the 1970s.

The title card at the end of A Hidden Life comes from the final sentence of George Eliot’s Middlemarch.

The Jägerstätters lived in St Radegund, a small village of 500 people in Upper Austria, near Salzburg and the German border–in the same province where Hitler was born and spent his early youth–not far from Berchtesgaden, his mountain retreat during his years as head of the German state.
Shot in eight weeks in July and August of 2016, the production of A Hidden Life spent 24 days in South Tyrol, the northernmost province of Italy, then moved to Austria, shooting for a few days in St Radegund itself. For the prison scenes, the production spent the last 14 days between Zittau and Berlin, Germany.

“Most importantly, we learned that the natural light levels were very much part of the decision-making process as to whether or not a certain location may or may not work,” Summersgill said.
The film was shot in churches, cathedrals, and farms with real livestock and orchards, up mountains, in fields, and along rural pathways. “Nature and the natural environment were part of the subtext and the locations provided us with a foundation to build up from,” he added. 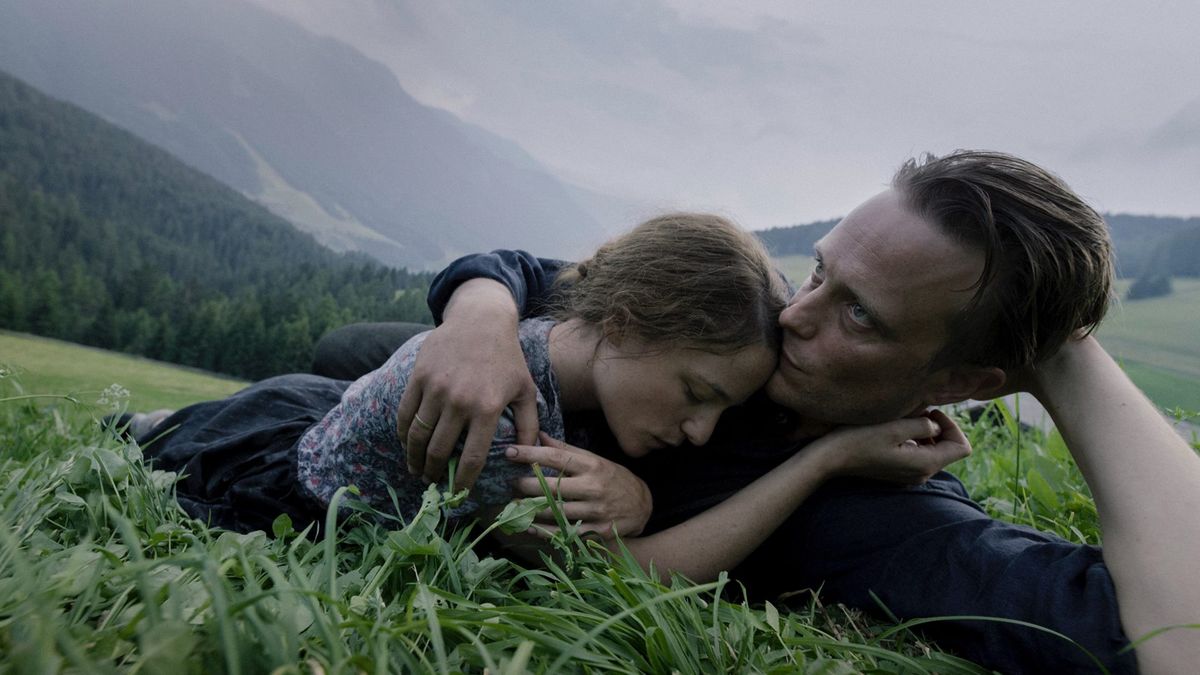 A Hidden Life production designer Sebastian Krawinkel carried out research on Franz Jägerstätter and the important places in his life, consulting letters and archive materials.

“We scouted some of the locations together a year in advance in order to see them in the right season,” said Krawinkel. “For almost a year, I had a weekly dialogue with Terry [Terrence Malick] about which sets he would need and which locations and references he liked.”

The production prepped in the spring and was shot in the summer. Two seasons were captured with a small splinter unit that came back to the locations later in the year, led by cinematographer and long-time Malick crew member Joerg Widmer.
The historic background of the story required the production to avoid modern buildings and signs of contemporary civilisation.

“We were fortunate to be able to shoot inside a working mill, a working blacksmith’s shop, and several real prisons,” noted Krawinkel.

One of the prisons used was Hoheneck, the infamous Stasi prison near Dresden–notorious for its inhumane conditions.

Another shot shows the exterior of Tegel prison as it stood in the Jägerstätter’s day. It is still a working prison, so the production was obliged to shoot the Tegel interiors elsewhere.

A few scenes were shot in the St Radegund locations where the events depicted actually took place–including certain interiors of the Jägerstätter house, which has over the years become a pilgrimage site–as well as by the Salzach river near St Radegund and in the woods below the house.
The clock visible on the wall of the Jägerstätter living room is the one that Fani was listening to when, at 4pm on 9 August 1943, at the very hour of Franz’s execution, she remembered feeling her husband’s presence.

The bedroom is theirs and looks as it did then. Her embroidery still hangs on the walls. Franz and Fani’s three daughters–Maria, Rosalia, and Aloisa–live in, or near, St Radegund. Fani passed away in 2013, aged 100.
Valerie Pachner, the actress who plays Fani, grew up in the same province 40 miles (64 km) away.

A few scenes were set at the farmhouse of a Jägerstätter friend and neighbour, Eckinger.

Today, the fields around St Radegund are covered in corn, a crop that was not grown at the time, as well as with power lines and modern houses, some immediately adjacent to the Jägerstätter’s own. As a result, the production was obliged to go higher up into the mountains than where the village itself lies.
The production also filmed the Third Reich Berlin court trial scene in Schoenberg in the renowned Kammergericht building. “It was scary to be inside the real courtroom where the Nazis sentenced so many to death,” Krawinkel noted.

When, the following year, Lueben, the principal judge in Franz’s case (played by Bruno Ganz), was asked to condemn three priests from Stettin as he had Franz, he chose instead to commit suicide.
The team had to be small, agile, and flexible. “Changing lighting conditions required a continuous attention for stop changes to ensure proper exposure,” explained cinematographer Widmer.
Widmer agreed with Malick to use artificial lights only on rare occasions. For all the other sets, including the prison cells, the team simply used the right time of the day to shoot it until

they lost the light.
“The barns were always shot when the openings of the buildings provided sunlight or at least brightness,” said Widmer.

A Hidden Life team only had to change the shooting schedule once: when the weather forecasters said it was not going to be sunny on the day, they planned to shoot the interior of the water mill.

The production was shot digitally on the Red Epic Dragon camera system. The camera was selected for its ability to handle stark contrast within a scene, preserving details in both the highlights and shadows of the image, while still maintaining realistic colour.

“We were prepared to keep the camera gear small,” said Widmer. “The lighting gear consisted mostly of bounce boards and blacks.”

The Jägerstätter’s house sets at the Nauders Bauer location included several of the farm animals in A Hidden Life film.

“We brought goats, pigs, chickens, a cow, and donkeys well in advance in order to accustom them to the surroundings and to us,” said Krawinkel.

Working the fields also provided fun on the shoot, aside from one stubborn cow. “Ploughing with a cow was a particular challenge since one cow turned out to be very stubborn and the trained cow, we had, did not always want to do exactly what we asked her,” he added.

August Diehl, who plays Franz Jägerstätter in A Hidden Life said: “I remember the first time I read the script. I had a lot of talks with Terrence. He was curious about me and who he was going to work with. I remember talking about life and how we see things.”

“I grew up in France on a farm without electricity. He was curious about all this, about how I live and what my experiences were,” he added.
Diehl noted that he treated the letters between the husband and wife almost like another script alongside Malick’s.

Valerie Pachner, who stars opposite Diehl as Fani, Jägerstätter’s wife, first spoke to Malick on the telephone.

She said: “When he called me the first time, we didn’t do any small talk. We immediately talked about the world and life and in that moment, I just felt ‘wow, that’s where I want to go, this is someone I want to work with.” 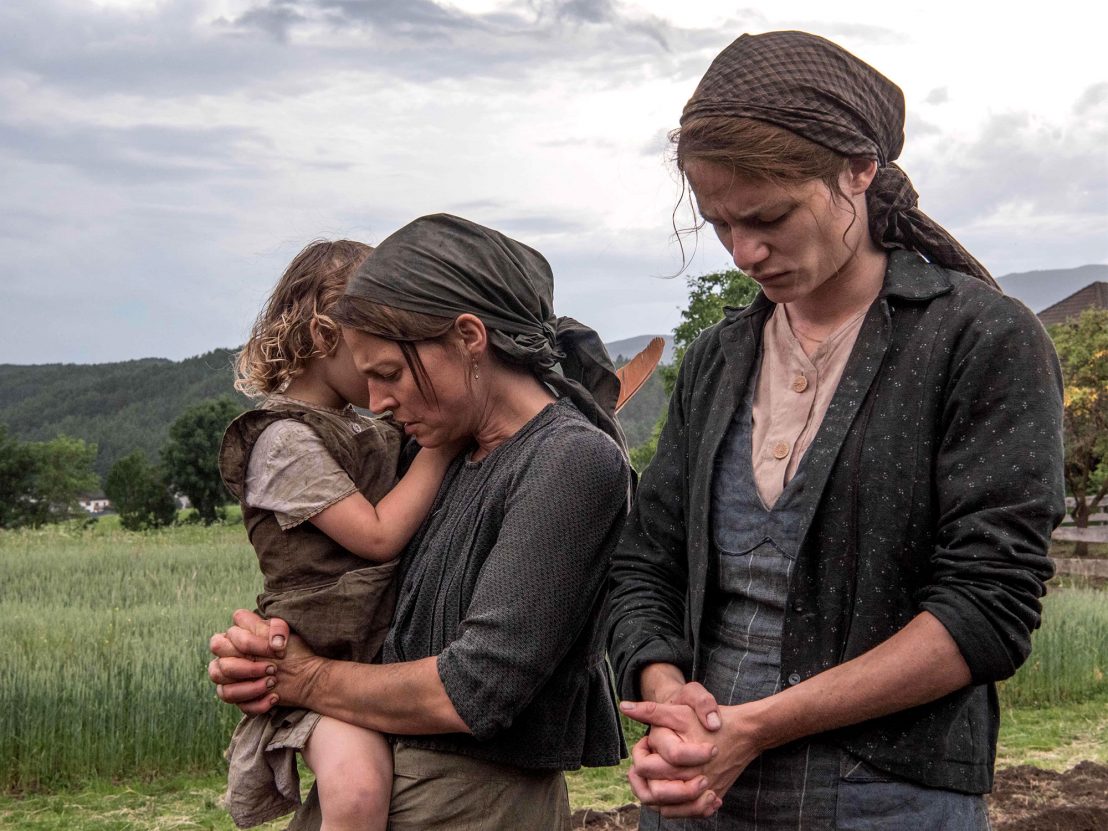 Pachner, who grew up in Austria, felt close to the story. “People relied on each other, and that also meant that you could not break out and be different. You had to toe the line.”

Malick sent her a book about women in the first world war working on the farms when the men were away fighting. She also got a present from a friend: a book about scything.

“We were actually both very much devoting ourselves to the roles because it has so much to do with trust,” Malick said. “You have to trust somebody very much to make this film and we risked a lot. And with Valerie I felt—from the first moment—that she was willing to do the same, to take the same risks.”

For her part, Pachner describes working with Diehl as intense. “The first five or six weeks we were constantly together and constantly working.”

“There is always imagination with costumes. But in this case, the most important part was getting as close to the reality as possible,” A Hidden Life costume designer Lisy Christl explained.

Christl, who is from Bavaria in southern Germany, said the plethora of little museums in the mountain villages provided good research materials. “We made costumes especially for the characters, but there are many original costumes out there. There is a lot of research material about priests in Bavaria and Austria. It was important to find nice, worn, old pieces.”

“I have quite a lot of books from this time period. You can still find flea markets with original pictures,” said Christl. “When we started to work in south Tyrol, I found a fantastic book about people in the mountains in these rural valleys. It was exciting and the faces of the people were inspiring, real people working on the fields.”

It also required Christl’s sharp eye for details. The Wehrmacht German army uniforms that the Austrian recruits wore had one difference.
“The piping around the shoulder pieces were different—they were light blue for these special units (of the German army). It is very important to get it right but it is what I do in my daily working life.”