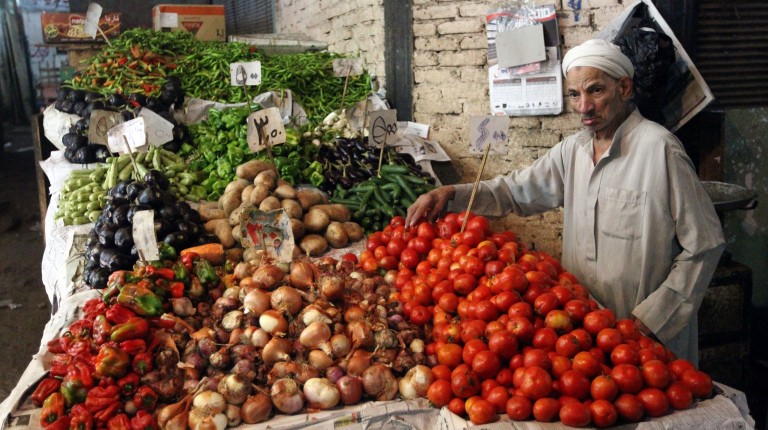 Egypt’s Consumer Price Index (CPI) issued by the Central Agency for Public Mobilisation and Statistics (CAPMAS) said that Egypt’s annual headline inflation rate for May rose slightly to 14.1%, compared to 13.1% in April year-over-year (y-o-y), while monthly inflation increased to 1.1% in May, compared to 0.5% in April.

The CAPMAS explained that this rise in Egypt’s annual headline inflation is due to higher prices of food – listed in the basket of goods which measures inflation – as the prices for food and non-alcoholic beverages rose 15.1%, up from 13%, especially fruits which rose by 18.1%, while beef and poultry increased by 3.6%.

The report cites that the increase in lemon prices, which rose by 67% to reach EGP 100 per kg, was the main driver behind the hike in fruit prices.

Radwa El-Swaif, head of Research at Pharos Holding, said that Egypt’s annual headline inflation in May came slightly above our expectations of 12.8% y-o-y and 0.5% month-over-month (m-o-m), which was based on the surprisingly low April inflation. Going forward, we expect annual inflation to hover around 14% during the summer as the period between June – August 2019 will witness anticipated fiscal consolidation measures as well as a historically high inflation season. The stability in annual inflation is mainly driven by the high-base effect, especially of higher energy prices were enacted before the end of June.

“We see inflation accelerating to monthly rates higher than May’s reaching a peak of 3.0% m-o-m in June 2019 as a response to the next round of fuel subsidy reforms and until September, when fiscal consolidation impact should have faded. In addition, by the end of the summer, the Back-To-School season begins which generally pushed prices around 1% MoM. We are adjusting our year average inflation expectation from 12.4% to 12.8% for the calendar year of 2019.”

According to a research note by Beltone Financial, they attributed the rise in Egypt’s annual headline inflation to the seasonal demand accompanying Ramadan and a higher annual increase in fruits and vegetables by 39% against 27.4% in April.

Accordingly, the Naeem Brokerage also said that the inflation hike came as a result of rising demand including higher consumption of food products ahead of the Eid al-Fitr holiday at the start of June.

On the other hand, the Central Bank of Egypt (CBE) said that Egypt’s annual core inflation decreased to 7.83% in May, up from 8.1% in April.

Core inflation is the change in the costs of goods and services, but it does not include those from the food and energy sectors. This measure of inflation excludes these items because their prices are much more volatile.

What does it mean for interest rates?

The increase in inflation further consolidates uncertainty about the upcoming decision of the CBE on interest rates, especially since a fuel subsidy cut is planned within June.

Egyptian authorities agreed with the International Monetary Fund (IMF), to implement several reform measures in June 2019, including a prime ministerial decree to implement a fuel price indexation mechanism for all fuel products in June, except gasoline octane 95 (a decree was already issued in December 2018), liquefied petroleum gas (LPG), and fuel oil used in bakeries and for electricity generation.

Consequently, Beltone Financial reiterated their view of an expected 2.5-3.5% increase to annual headline inflation throughout the third quarter of 2019, driven by the fourth round of fuel and electricity subsidies cuts, and the third increase in water prices. “We foresee inflation averaging 13.7% in the second half (H2) of 2019, almost flat from H1 of 2019, average of 13.4%, thanks to a stronger local currency that will reduce imported inflation pressures.”

As a result, the research firm expects interest rates to remain on hold in the next monetary policy committee (MPC) meeting on 11 July 2019, as they predict a move toward the wider implementation of the fuel indexation mechanism. However, they reiterated their previous view of a 100 basis points cut in rates by the end of the year, which will remain hostage to the pace of inflation deceleration post fiscal reforms.

On the other hand, Standard Chartered bank foresees further interest rate cuts by the CBE on the back of slowing inflation, as they forecast inflation to average 11.1% in fiscal year 2019/20.

Egypt’s inflation rates have sky-rocketed since the currency floatation that took place in November 2016, reaching a record high of 35% in July 2017, following the second wave of energy subsidy cuts. They have been gradually decreasing since then.