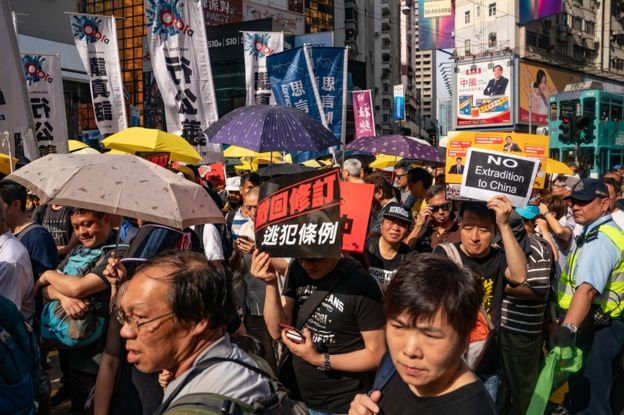 Thousands of demonstrators gathered in the streets of Hong Kong on Sunday to protest against the proposed extradition law which would allow suspects to be sent to mainland China to face trial.

European media estimated the number of the demonstration’s protesters to be over one million people, making it the biggest march in over 20 years.

The police used tear gas to disperse the protesters who shouted, “protect Hong Kong” and chanted, “no China extradition, no evil law”. They also called for Hong Kong’s chief executive Carrie Lam to step down.

During Sunday’s demonstrations, violence erupted between riot police and protesters as three police officers and a journalist were injured.

Regardless, Hong Kong’s government stressed that the proposed law will pass on Wednesday.

In a press conference on Monday, Hong Kong’s chief executive Carrie Lam said that the law would in no way erode any of the special freedoms the territory enjoys. Referring to China, Lam said that “the bill wasn’t initiated by the central people’s government.”

She added that the law was proposed out of conscience and commitment to Hong Kong.

Lam noted that her government, “would not withdraw its proposal on amending the Extradition Law, as it is an effective way to prevent Hong Kong from being a haven for fugitives.”

But she also promised to exert more efforts to enhance the bill, which would go through a second reading at the legislative council on Wednesday.

Lam made a point to stress that her government will safeguard the human rights of the bill as they are legally binding and “would regularly report to the legislature implementation of the bill after it is passed.”

Xi Jinping and the ‘Chinese Dream’