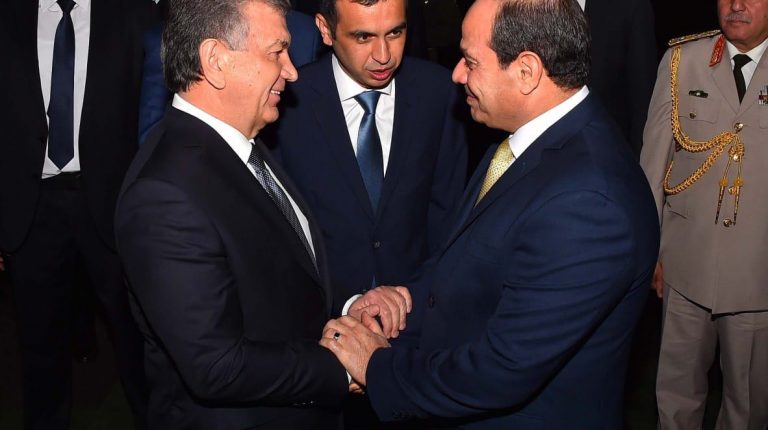 In September 2018, Al-Sisi visited Uzbekistan’s capital of Tashkent. The visit was considered the first of its kind by an Egyptian president to the Asian country.

Vietnamese President Tran Dai Quang arrived in the Luxor International Airport for a tourist tour amid intensive security measures on 26 August 2018. The one-day visit comes upon an invitation by President Al Sisi. Both leaders witnessed the signing of several deals and memorandums of understanding (MoUs) aimed at promoting cooperation between the two countries in various fields.

The Egyptian Business Council for International Cooperation (EBCIC) will launch its seventh trade mission to Latvia and Estonia to promote the investment opportunities in the Suez Canal Economic Zone (SCZone) in addition to encouraging cooperation in the fields of tourism and ICT in the middle of June.

Several Egyptian businessmen will participate in the mission to discuss with their counterparts boosting trade exchange and business opportunities.

The mission is organised in coordination with the ministry of foreign affairs, the embassies of Latvia and Estonia, the EBCIC’s Chairperson Motaz Raslan said, adding that it will also include CEOs of companies operating in tourism, petrochemicals, ICT, manufacturing, maritime cargo, and logistics.

On 17 March, the Latvian ambassador Iveta Šulca met Raslan and discussed the ways of intensifying business cooperation between Egypt and Latvia.

The mission is part of the strategy of the council, which focuses on exploring investment opportunities in untraditional markets and working to strengthen Egypt’s trade and economic relations with these markets, Raslan noted.

The mission will meet with a large number of ministers and senior officials of both countries and business organisations to showcase the developments in Egypt’s investment climate, he added.

There are substantial projects being implemented by the Egyptian government which would require to be promoted, he said, noting that the mission will also focus on marketing different Egyptian goods and products.

He pointed out that the choice of Estonia to be the next destination of the council’s mission is due to the existence of many opportunities for cooperation between the two countries in several fields, such as information technology and e-government applications.

“Estonia is one of the developed countries in this field and signed a past MoU with the Egyptian ministry of communications and information technology, so it is possible to invest this agreement in the promotion of cooperation in this area and discuss the opportunities available between the companies of the two countries,” Raslan shared.

He said that Estonia is an important market for Egyptian tourism and there are opportunities for boosting its tourist numbers to Egypt, noting, “the mission will also focus on promoting many investment opportunities in the SCZone and the possibility of cooperation in the fields of energy production and extraction of rock oil, where Estonia is one of world’s leading countries.”

Latvia is also an important market for Egypt, Raslan affirmed, noting that there are great opportunities to develop Egypt’s trade and economic relations with the European country.

“Egypt’s trade exchange with Latvia is subject to the EU-Egypt Association Agreement, so there aren’t any trade barriers or obstacles to push the figures forward,” Raslan added.

The trade exchange between the Latvia and Egypt is still limited and does not match both countries’ distinguished relations or the great opportunities in the Egyptian and Latvian markets, Raslan said.

Statistics show that Latvia’s exports to Egypt amounted to €70m ($79.2m) in 2018, while Egypt’s exports are about €3.5m ($3.9m), he said, noting that trade will be on the list of priorities of the mission, in addition to discussing investment opportunities.

The mission’s agenda includes visits to some factories to recognise their success stories and benefit from their experiences in addition to finding new markets for Egyptian goods.

In March, ambassador Šulca, welcomed the EBCIC’s initiative noting that Latvia is working to become the first country in Europe to introduce the 5G internet.

Innovative technologies and ICT solutions developed by Latvian companies can be of great interest to Egypt, the ambassador noted, adding that the World Bank has recognised Latvia among 30 leading countries of the world, which have conducted significant reforms in improving the entrepreneurship environment.

Egypt should make full use of its traditional partners too

Rakha Ahmed, former assistant of Egypt’s foreign affairs minister, said that entering untraditional markets is a good direction by the Egyptian government, yet he recommended that the government make full use of its relations with traditional partners, including European countries and China.

“I think that there are many difficulties to enter markets like central Asia, especially since most of them don’t have ports to receive Egyptian goods,” he said, adding that Egyptian goods have to pass through a third country to reach central Asia which raises transportation costs.

Central Asian countries have tighter relations with their traditional partners such as Russia and China which makes it easy to trade with them, he stressed, adding that countries such as Latvia, Estonia, and Lithuania are small countries but very developed particularly in the fields of small and medium-sized enterprises (SMEs), ICT, and heavy industries.

“I suggest achieving a more balanced trade exchange with our traditional partners and to boost cooperation with African countries,” he asserted, noting that there are many good opportunities in Africa especially in the fields of pharmaceuticals and cement.

There are three main conditions that will enable Egypt to boost its cooperation with untraditional markets which are good quality, reasonable prices compared to similar goods of competitor countries, and the continuity of cooperation.