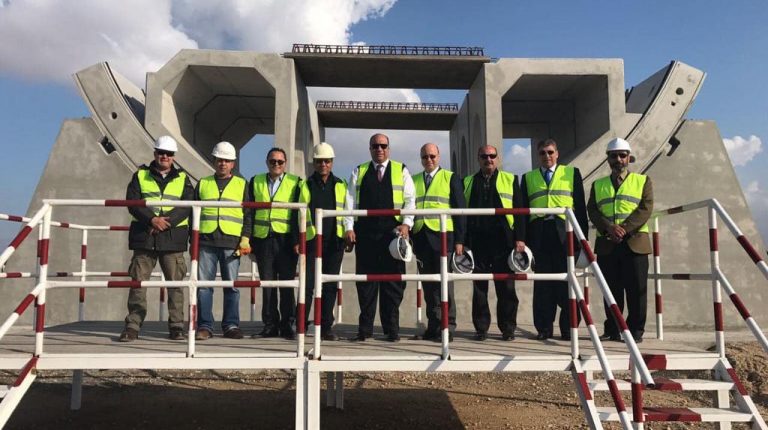 The Egyptian government launched a number of additional points of contact to link the two banks of the Suez Canal earlier this month as part of the state’s efforts to develop the Sinai and enhance investment opportunities in the region.

Mohab Mamish, head of the Suez Canal Authority and of the Suez Canal Economic Zone (SCZone), said that it is planned to shorten the journey from Sinai to the valley through tunnels to 20 minutes, which would serve trade flow and prevent traffic congestion.

The government is in the process of implementing two more tunnels in Port Said with the same specifications of the Ismailia tunnels, which will be inaugurated soon, bringing the total number of points to contact in Sinai to 12 points through five tunnels, seven bridges, and five floating tunnels, along with ferries.

For his part, Major General Abdelkader Darwish, former deputy head of the SCZone, said that the operation of the tunnels contributes toward the increase and activity of the east Port Said port movement, especially in light of the recent contracts with investors for the implementation of a multipurpose station and the car station, adding that the tunnels will end waiting time for ferries.

He said that the operation of the tunnels enhances the tendency to expand Egypt’s presence in the market of fresh foods and agricultural crops–whether vegetables or fruits–by taking advantage of the low transport period, which ensures that the goods are not damaged during transit between agricultural areas in some cities such as Sharqeya, Daqahleya, and Menoufia, toward European countries and markets.

Darwish added that the goods crossing points to Sinai enhance the opportunities of investors in east Port Said, linking industrial areas with the port and Egyptian markets, facilitating transport from east Port Said to 10th of Ramadan City and Greater Cairo, which represents one third of the Egyptian market.

The tunnels improve efforts to benefit from the mineral wealth needed by the Egyptian market and the factories located in the surrounding industrial areas, especially the 10th of Ramadan City, which will benefit from the low cost and short transit period from east Port Said, reaching only 90 minutes, he continued.

Furthermore, Darwish noted that shipping previously took 2-3 days due to flow problems, which tunnels will shorten to 3-4 hours from port to market, as the transit through tunnels takes only 15-20 minutes.

For his part, Chairperson of the Port Said Chamber of Shipping, Adel Al-Lamai, said that the projects of the Suez Canal tunnels are an essential element in the development of east Port Said, noting that it will increase investments and attract investors.

He added that the tunnels logistically link the Sinai tunnels in the area between Port Said and the west bank of the old port, in addition to linking the tunnels of the 30 June road, which would ease shipping, cut costs, hence decreasing the final product price.

He described the tunnels as a breakthrough awaiting all investors, and a vital artery to connect the Sinai to the heart of Egypt, with the linking and verification of the logistical support needed by investors in the SCZone.

Ali Basiouny, a maritime transport expert, explained that the tunnel project includes four tunnels, two in Port Said and two in Ismailia and a railway is planned though it is still under study.

He added that the tunnels contribute to the reconstruction of Sinai by facilitating movement and access to the Sinai during a period of 20 minutes, which will encourage living in Sinai, implementing economic projects, and achieving security.

Moreover, Basiouny explained that the tunnels contribute indirectly to the development of foreign trade by improving the opportunities for manufacturing and benefitting from the untapped raw materials available in the Sinai, either by establishing factories in the Sinai or near the shipping ports, which encourages the establishment of industries inside or outside the Sinai in areas such as east Port Said, and export through Egyptian ports.

The marine expert predicted that the operation of the tunnels would reduce the total transport period by 10-12 hours, noting that the time factor is translated into money in the transport of trade due to the reduction of costs.

Ahmed Akkad, former head of the Alexandria Chamber of Shipping, described the tunnel project as an added value to the trade movement in Egypt, because the existence of the container terminal in the east of the Suez Canal without direct land transport made it only a transit port or transit terminal, while the operation of the tunnels will activate Egypt’s foreign trade, both through export and import from the east Port Said port.

The tunnels serve Egypt’s foreign trade and Egypt’s trade with Africa, where trade can transit Egypt on land to African countries such as Sudan through the integration with the new roads expected to be activated such as Cairo and Cape Town road.

Akkad noted that it is difficult to predict a specific increase in trade due to the operation of the tunnels, because the shipping lines change their frequencies to the seaports according to their marketing plan every period because they are committed to contracts, and some of them work within alliances and time plans. But he expected Egypt’s foreign trade through the Suez Canal axis to improve over the medium term, and attract investments in that region.

Ahmed Sultan, former adviser to the minister of transport for maritime transport, stated that there are many objectives of setting up tunnels, most notably linking the Sinai with the largest area of Egypt, facilitating trade exchange through land transport between Asia and Africa across the Sinai Peninsula, stimulating trade exchange after overcoming the difficulties of transportation to and from it, and facilitating the exit of goods.

Sultan added that the tunnels maximise the trade exchange between the ports of North Sinai, Al-Arish, and east Port Said in local trade, enhance competition and land transport opportunities, and push forward the development of the Sinai.

In addition, he pointed out that the Alexandria port receives the largest share of Egypt’s trade due to the difficulty of transport to and from the east Port Said port, but the tunnels overcame that problem and the east Port Said port is expected to play a pivotal role in local trade during the coming period.