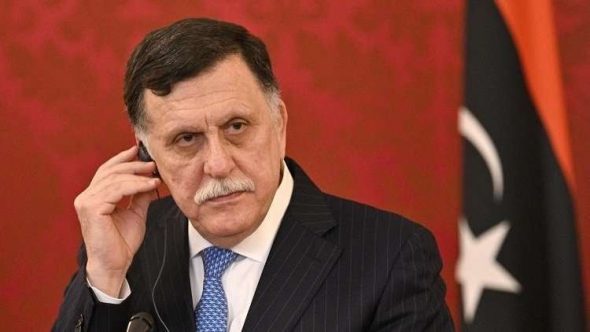 Chairperson of the Presidential Council of Libya, Fayez Al-Sarraj, proposed on Sunday an initiative to reach a way out of the Libyan crisis without military intervention.

In a televised speech, Al-Sarraj said that his initiative is based on coordination with the delegation of the United Nations (UN) in Libya to hold a Libyan national forum gathering all Libyan factions from all regions.

He noted that during this proposed forum, all Libyan factions should agree on a road plan for the next phase and come to a consensus on the constitutional roles in order to hold simultaneous presidential and general elections before the end of 2019.

Al-Sarraj called on the international community to support his initiative and open an investigation on the “war crimes, and crimes against humanity that happened during the assault against Tripoli and other cities.”

Early in April, the leader of the Libyan National Army (LNA) Khalifa Haftar, who is supported by Egypt and the UAE, started an attack on Tripoli, the capital of Libya, and where the internationally-recognised government is based. However, he has so far failed to penetrate the southern defences of the city.

Essentially, Haftar’s campaign was not successful because of the resistance from the local militants who are affiliated to the internationally-recognised government.

The fight in Tripoli has negatively affected the UN-backed efforts to reach a peace deal between rival factions and it also threatens to further damage the oil industry in the oil-rich country.

Additionally, Al-Sarraj told Reuters that he will not meet Haftar again for negotiations, adding that the later could not be part of a political solution.

Meanwhile, a number of pro-Haftar politicians and activists met in Cairo on Monday to affirm their support for the LNA in “the battle against terrorism.”