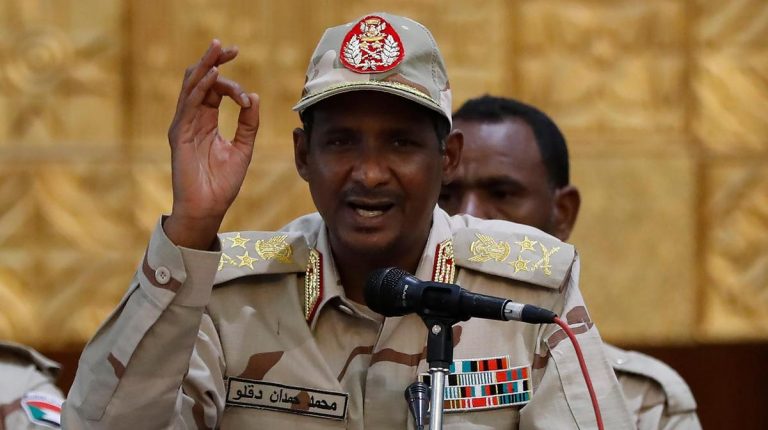 General Mohamed Dagalo, deputy chairperson of the Sudanese Transitional Military Council (TMC), better known as Hemedti, has pledged to “execute” those involved in the bloody dispersal of the Khartoum sit-in two weeks ago.

In a televised address on Sunday, Hemedti affirmed that they are working hard to hold those responsible for the crackdown accountable and to take any person who made a mistake or misconduct to “the gallows.”

Dagalo’s controversial remarks came a few days after the ruling military council admitted for the first time that it decided to disperse the sit-in held outside the armed forces headquarters in the Sudanese capital on 3 June.

The violent dispersal killed more than a hundred protesters and wounded 500 others, according to the opposition’s figures. The Sudanese authorities put the death toll at 61.

The protest group, the Declaration of Freedom and Change Forces (DFCF), accused the Rapid Support Forces (RSF), headed by Hemedti, of being behind the 3 June crackdown.

However, Hemedti denied that the RSF was responsible for the dispersal of the sit-in, claiming that the crackdown was a “trap to distort the RSF.”

According to Amnesty International’s recent report, since the beginning of June, “there have been reports that security forces are using live ammunition on protesters. Bodies have been dumped in the river Nile.”

Meanwhile, the United Nations Special Representative on Sexual Violence in Conflict, Pramila Patten, called last week for deploying teams to Sudan to investigate the involvement of Sudan’s militias and RSF into gang-rape incidents.

The reports “include rapes and gang rapes of protesters, women’s human rights defenders, and female medical personnel working in hospitals near the sit-in perpetrated by the RSF and other militias,” Patten highlighted.

Autocrat Omar Al-Bashir made his first public appearance on Sunday since he was toppled by his military on 11 April.

Al-Bashir was transported from a prison in Khartoum to the Sudanese general prosecutor’s office to face charges of corruption and the killing of protesters during Sudan’s mass protests against his regime over the last months.

Earlier on Saturday, the general prosecutor charged the deposed president with “illegal wealth, possession of foreign funds, and the acquisition of lands.” He added that 41 lawsuits were filed against other former regime figures.

In April, the head of TMC Abdul Fattah Burhan revealed that more than $113m different currencies were seized at Al-Bashir’s house.

On Sunday, Burhan met with the Arab League (AL) Secretary-General, Ahmed Aboul Gheit, who arrived in Sudan to hold meetings with the military council and opposition members.
During a press conference on Sunday, Aboul Gheit stressed that AL’s main goal is “to ensure stability in order to reach a national accord in Sudan.”

He added that TMC head Burhan hopes “to find common ground to help Sudan make a transition from this period to a new one, (an era) which could give Sudan and Sudanese people all what they want,” allowing them to achieve economic, political, and social prosperity and to reach a civil government that would be accepted by all parties.

Meanwhile, Aboul Gheit also met with a number of the opposition members including Abu Faysal, a member of the DFCF. During the press conference, they discussed “the Sudanese revolution and negotiations between DFCF and the ruling military council.”

The DFCF “asked to set out good conditions (to negotiate), asserting that they “will not re-negotiate agreements that have been made before.”