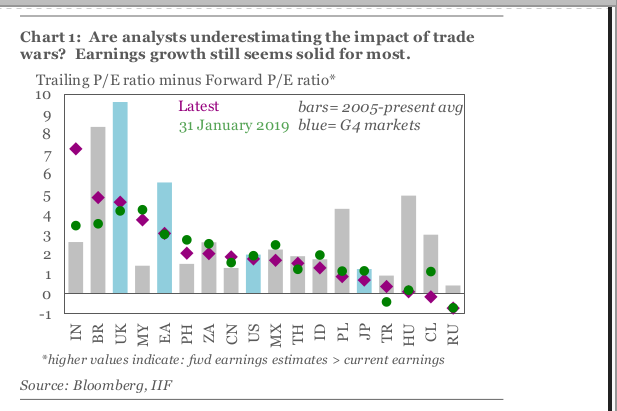 “The direct impact of the United States-China tensions is generally expected to be modest, ripple effects across supply chains, business confidence and investment could hit much harder—particularly when non-trade policy comes into scope,” according to the Institute of International Finance (IIF) report.

“For instance, technology transfer-related issues are casting an increasingly long shadow as the scope for “weaponizing” access to American mobile operating systems comes into sharper focus,” the IIF stated.

“Similarly, extracting concessions on migration policy, alongside pressure for ratifying the

USMCA—is widely seen as a motivation for the US threat of a 5% across-the-board tariff for Mexico. Since manufacturing in the US and Mexico alike relies on components making multiple border crossings, supply chains would clearly suffer from higher tariffs; even attempting to implement such tariffs could mean a sharp reduction in cross-border trade flows,” the IIF added.

“The optimists are winning: looking at expected earnings growth across markets, there have been some markdowns this year, notably Mexico and Chile, but also some notable gains including India, and Brazil.  But for most markets, earnings estimates have changed little in recent months—trade tensions notwithstanding,” the IIF continued.

Concerning the US, the report stated that strong cash flows from operations continues to fuel market-friendly dividends, buybacks, M&A and even capex (of note, US small businesses, which tend to be more domestically oriented, report a significant pickup in capital spending plans this year; similarly, the Philly Fed index for future capex has held up well to date).

In terms of the emerging markets (EMs), it is seen as particularly vulnerable to trade war fallout and rising global risk aversion, spreads have generally tightened this year, with some notable exceptions including Argentina, Turkey, and Lebanon.

“This suggests a similar dynamic is at play, the known boost from lower rates is offsetting less knowable future risks, for now,” the report explained.

The IIF revealed that in January 2019, most EM central banks were expected to increase rates, but the balance of expectations has since shifted to cutting or keeping rates on hold.

It further explained that the Inflation has increased in some EM countries notably India, Chile, and Colombia, but the pick-up appears related to supply-side dynamics, suggesting that there is some room for moderate monetary loosening to stimulate demand.

“But until that happens, the widening rate differential with mature markets has made EM carry trades increasingly attractive in many countries. However, the leveraged nature of carry trades adds to the financial stability risks posed by the increasingly heavy global debt burden” it stated.