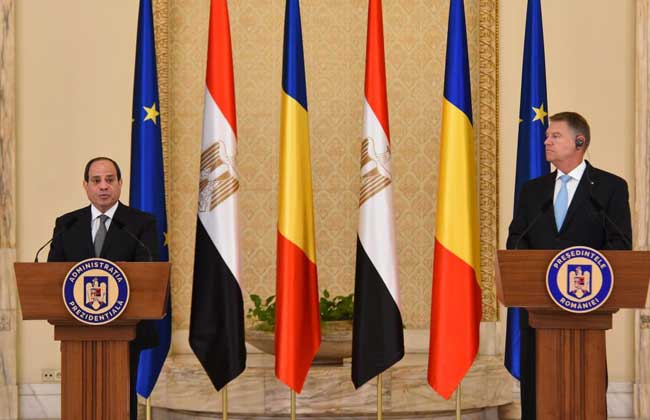 President Abdel Fattah Al-Sisi expressed on Wednesday Egypt’s keenness in its relations with Romania, praising the Romanian position toward Egypt. He also hailed the recent progress in relations between the two sides.

During a press conference with his Romanian counterpart Klaus Iohannis in Bucharest, the president reviewed the developments of the Egyptian government’s plan for comprehensive economic reform and the ongoing national projects with investment opportunities.

The president said that trade relations between Egypt and Romania surpassed $1bn in 2018.

He stressed the importance of achieving a qualitative leap in bilateral cooperation between the two countries, and increasing the volume of trade and investment exchange, including building on the outcomes of the third session of the Joint Economic Committee which was held in Cairo last February.

Al-Sisi further highlighted the necessity of enhancing cooperation in a number of promising fields such as energy, in light of the recent discoveries of gas in offshore fields in Egypt and Romania, as well as the field of tourism, which has recently witnessed a doubling of the number of flights to the cities of Sharm El-Sheikh and Hurghada, reflecting the appeal of Egyptian tourist destinations for Romanian tourists.

For his part, the Romanian President praised the bilateral relations between the two countries. He stressed his country’s support for Egypt in implementing the economic reform.

The two leaders also exchanged views on a number of regional issues such as the peace process in the Middle East, Syria, Libya, and Yemen. They have agreed on the importance of preserving the unity and territorial integrity of countries.

The two sides agreed to work together to develop bilateral relations of friendship and cooperation, especially following the regularity of the joint participation council between the two sides during the past two years.

Al-Sisi and his Romanian counterpart stressed the necessity of working to counter illegal immigration and its causes. They also discussed efforts for countering terrorism which requires international joint effort.

Al-Sisi arrived in the Romanian capital Bucharest on Wednesday, as the second stop of a two-state European tour that included Belarus.

President Al-Sisi is also planned to meet with the speakers of the Romanian Senate and the Chamber of Deputies. He will give an address at Bucharest University of Economic Studies on relations between Cairo and Bucharest, as well as efforts to develop the higher education system and scientific research in Egypt.

The State Information Service (SIS) said in a statement that President Abdel Fattah Al-Sisi’s visit to Romania, is the first visit by an Egyptian President in 10 years, which marks the culmination of more than a century of close relations and fruitful cooperation between the two countries.

Romania is ranked 40th among the countries investing in Egypt. Romanian investments up to 2017 amounted to $ 223.9m, distributed over 60 diversified investment projects.