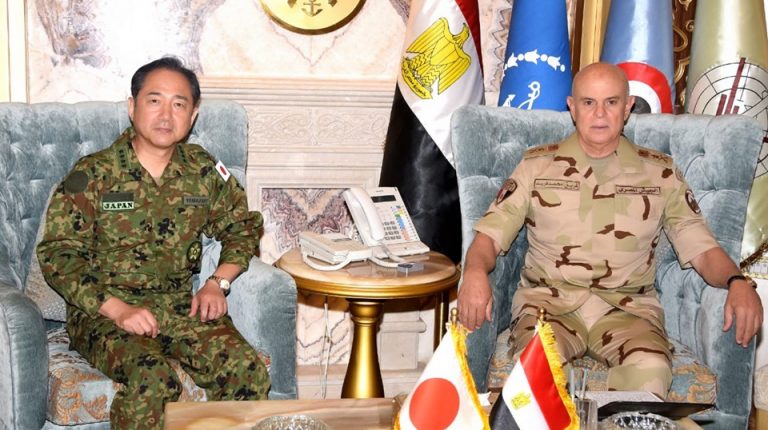 Both discussed issues of common interest and exchanged views over the recent updates in the region which affect regional and international security and stability, the statement read.

They also addressed enhancing mutual military cooperation in various felids and increasing joint drills between the two countries in a manner that strengthens the partnership between Egypt and Japan.

Farid expressed Egypt’s readiness to bolster more cooperation between the two countries during the upcoming period.

For Yamazaki, he emphasised the significance of cooperating with Egypt as it has strategic importance in maintaining stability and security in the Middle East, the statement noted.

On the other hand, Egypt’s Minister of Defence, General Mohamed Zaki returned from France on Wednesday after attending the 53rd International Paris Air Show which was held from June 17 to 23, 2019.

This exhibition for the aviation and aerospace industry was held from June 17 to 23, 2019.

In Paris, Zaki met with French officials, including French Minister for the Armed Forces, Florence Parly.

Both discussed recent updates in the region and enhancing mutual military cooperation in the fields of exchanging expertise and manufacturing.

Meanwhile, Zaki also met with chairpersons of aviation companies and the aerospace industry to discuss increasing cooperation with them.

In March, Egyptian and French naval forces carried out the joint drills ‘Cleopatra-Japian 2019’ in France. This is considered one of the biggest joint exercises between the two countries.