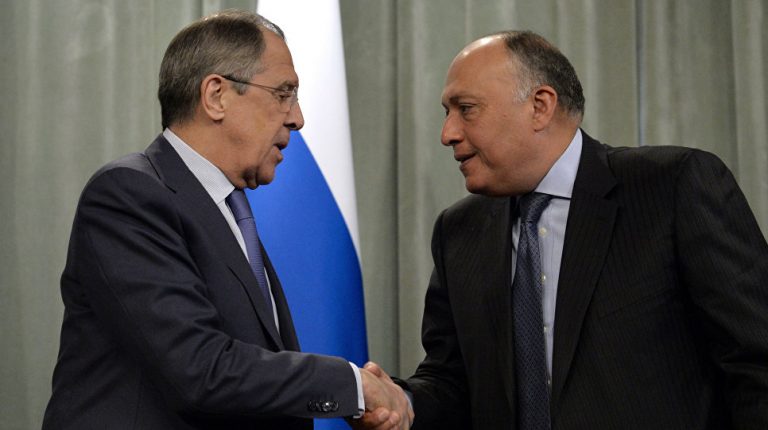 Egyptian Foreign Minister, Sameh Shoukry, and Minister of Defence, Mohamed Zaki, headed to Russia on Sunday for bilateral talks held on Monday, according to an Egyptian military statement.

Shoukry and Zaki will take part in two-plus-two meetings with their Russian counterparts, the Minister of Foreign Affairs, Sergey Lavrov, and the Minister of Defence, Sergey Shoygu.

Shoukry will hold talks with his Russian counterpart on political, economic, and cultural fields as he aims to enhance bilateral cooperation at all levels, according to the Egyptian Foreign Ministry’s statement on Sunday.

Both ministers will also address international and regional issues of common interest.

For Zaki, he is going to hold talks with Russian high-level officials on increasing military cooperation and coordination between the two countries. Being that he is the defence minister, he will also attend the International Military-Technical Forum (Army-2019).

The two-plus-two talks on Monday would mark the fifth time Russian and Egyptian officials meet since 2013, according to the foreign ministry’s statement.

Relations between the two countries have significantly improved since they started regular consultations in the two-plus-two format, making Egypt the only Arab country to engage in such talks with Moscow.

Moreover, Russia adopted this format with five other countries.

On October this year, Egyptian President Abdel Fattah Al-Sisi, the current chair of the African Union (AU), and his Russian counterpart, Vladimir Putin will co-chair the first Russia-Africa summit in Sochi.

The summit aims to bring together all of Africa’s heads of state and heads of major regional organisations to discuss regional stability and development. It will focus on fostering political, economic, and cultural cooperation between Russia and African countries.

Al-Sisi and Putin will also inaugurate an economic forum in Russia on October 23, with the participation of African and Russian officials, and representatives of major corporations.