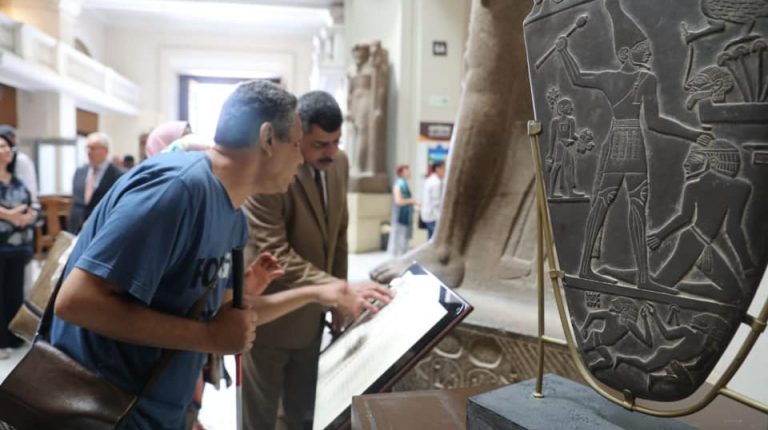 Take a moment to imagine the amount of art heritage, breath-taking legacy, and masterpieces visually impaired people are deprived of, just because they are not capable of seeing them. 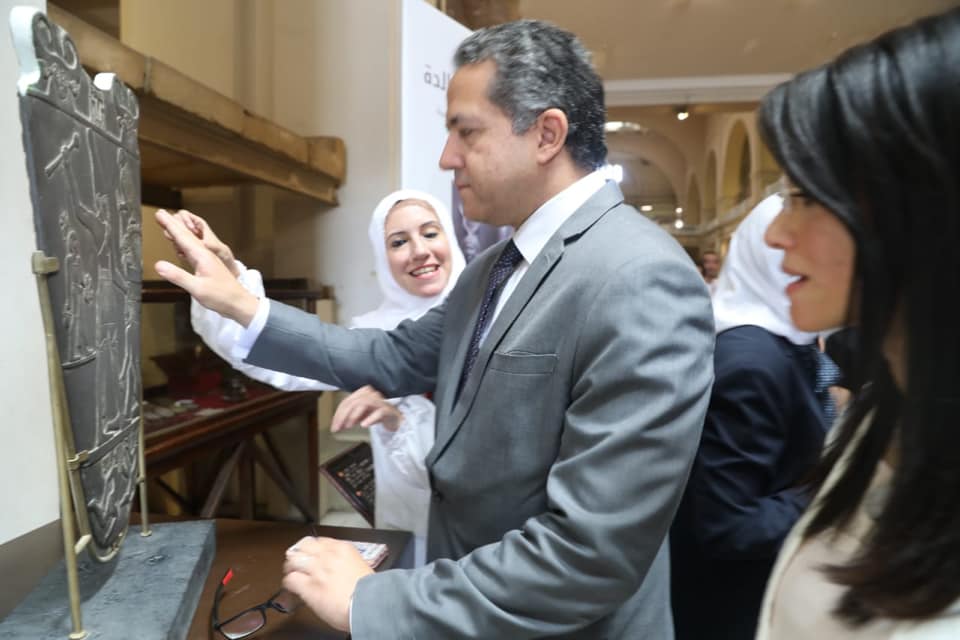 In an attempt to open a window of light to those who want to climb out and discover the enticing, fulfilling ancient Egyptians legacy, the Minister of Antiquities, Khaled El-Anany, inaugurated the first special itinerary for the visually impaired at the Egyptian Museum in Tahrir Square on Saturday.

The inauguration witnessed the attendance of the Egyptian Minister of Tourism, Rania Al-Mashat, and the Minister of Youth and Sports, Ashraf Sobhy. This was alongside the ambassador of Italy in Cairo, Giampaolo Cantini, and a number of other ambassadors from 16 countries.

The initiative aims to allow the visually impaired a chance to read and explore some of the showcased antiquities at the museum through a route which visitors get to explore, touch statues identical to the original ones, and read about them in the braille language.

The first of its kind initiative in any Egyptian museum, has been developed by the Italian Archaeological Centre of the Italian Cultural Institute in Cairo. This is in collaboration with the Egyptian Museum and the Museo Tattile Statale Omero in Ancona, in the framework of the programme “Vivere all’Italiana” of the Italian Ministry for Foreign Affairs.

The itinerary includes 12 statues from different pharaonic eras including the Narmer Palette for the Early Dynastic, a Triad of King Menkaura dating to the 4th dynasty of the Old Kingdom, a Sphinx of king Amenemhat III belonging to the Middle Kingdom, and a New Kingdom’s Statue of Amenhotep son Hapu.

According to a press release published by the ministry, “every object in the path is made in very hard Egyptian stone (such as granite and greywacke) and it can be touched and acknowledged with labels in braille language and electronic audio devices.”

The itinerary also provides visitors with the chance to touch and learn about a pyramidion of the pyramid of King Amenemhat III belonging to the XII dynasty, and a seated statue of the goddess Sekhmet, and the reign of King Amenhotep III.

The development of the itinerary took place with the “expertise of the Omero Museum in Ancona, where the visually impaired enjoy art with the rest of the public,” the statement reads.

It adds that the main aim of the initiative is sharing with Egypt the Italian know-how in the field through a capacity building approach.

Italy is one of the leading countries in the field of allowing visually disabled people an equal opportunity as others to explore and enjoy the heritage of nations and the artefacts displayed in museums.

The itinerary is only the start of applying the whole idea across the whole museum, as well as number of other museums across the country. All of this is in order to allow all people an equal chance to learn about the Egyptian civilisation.

The Egyptian Museum comes as the second historical exhibit to provide people with visual disabilities to learn about the history.

Last week, the ministry of antiquities announced it is applying a new system for visually impaired visitors through printing cards with the description of the halls and the showcased relics in the museum. This new system will start on Tuesday.

Elham Salah al-Din, head of the Museums Sector at the ministry of antiquities, said in a press release that this step comes to strengthen communication among all community members.

Salah al-Din also said it is considered a part of the museums’ sustainable development plan.

The cards will follow a special needs department at the museum, and the project will start running with a number of visually impaired visitors and several NGOs supporting people with vision specific needs, added Salah al-Din.

The displayed antiquities are not only limited to the Egyptian heritage, it reaches out to display the lifestyle of a particular oriental culture, such as Syrian, Turkish, and even Chinese.