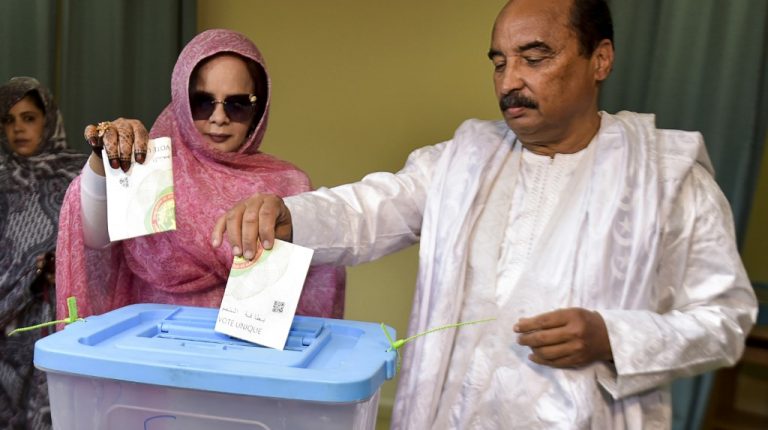 Mohamed Ould Ghazouani, a former general and defence minister in Mauritania, had secured 50.72% of the votes with just over half of the votes counted, the electoral commission data showed on Sunday, according to local Mauritanian media.

Ghazouani’s nearest rival, Sidi Mohamed Ould Boubacar, who is backed by the country’s biggest Islamist party, has 18.47% of the vote so far. Biram Dah Abeid, a black slavery campaigner, was third with 18.24%.

Earlier on Sunday, Ghazouani declared himself the winner of the Saturday polls. “There is only 20% left (to count), but that will not change the final result,” Ghazouani reportedly told his supporters.

Voters in the Islamic Republic of Mauritania went to the polls on Saturday to elect a new president as Mohamed Ould Abdel Aziz prepares to step aside after serving two five-year elected terms.

Some 1.5 million people in the west African state were entitled to vote in the presidential election.

Economic issues dominated the election campaign, with the outgoing president largely credited with stabilising the country after seizing power in a 2008 coup. Essentially, Abdel Aziz was elected as president in 2009 and 2014 in a vote boycotted by the main opposition parties.

Abdel Aziz has backed Ghazouani, who is heavily tipped to win the presidential election.

Located on the northwest African coast, Mauritania gained independence from French rule in 1960 but non-elected military governments largely ruled the country in the decades which followed.

Gilles Yabi, the founder of West African think tank (WATHI), told Reuters that if Ghazouani secured a victory, he would probably carry forward his predecessor’s policies but added, “Ghazouani is someone who is very discreet. It could well happen that the change is not merely cosmetic,” Yabi said.

Ghazouani once headed the country’s domestic security service and was chief-of-staff to Abdel Aziz from 2008 to 2018.

The favoured candidate campaigned on themes of continuity, solidarity, and security.

“There are only two choices — either going backwards, towards extremism, waste, and instability, or your candidate, who will continue what has been achieved to build a stable and developed state,” the 62-year-old told his supporters on Thursday.

Ghazouani’s main challenger is Boubacar, who was prime minister between 1992 and 1996 and head of a transitional government between 2005 and 2007.

Boubacar is hoping to win enough votes to push the election to a July 6 runoff.

According to a poll conducted by the Mauritanian Center for Strategic Studies and Research (CMERS), nearly 30% people favoured Ghazouani, while 23% said they would vote for Boubacar.

A Western ally, Mauritania had been in the grip of extremist violence until recently. In the past few years, the government has been able to bring down the levels of conflict.

Al-Qaida documents seized from Osama bin Laden’s hideout in the Pakistani city of Abbottabad indicated that the Islamist group had discussed a possible peace deal with Mauritanian authorities in 2010, a year prior to bin Laden’s killing by US forces.

Authorities deny that such a deal existed and claimed that intelligence work and rehabilitation of imprisoned jihadists caused a decline in Islamist attacks.