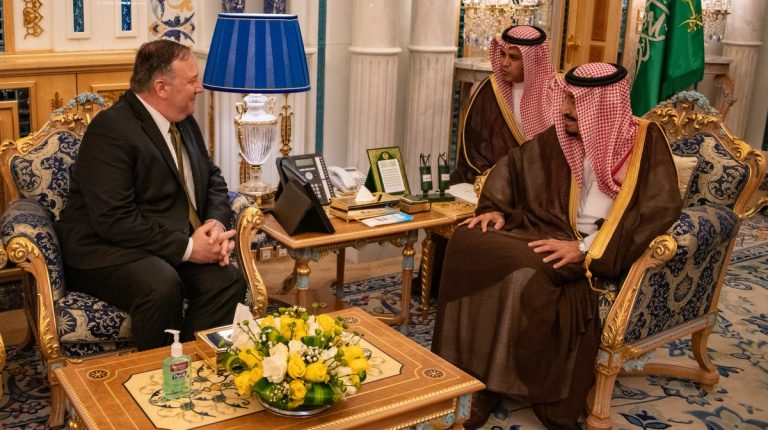 Pompeo began an official Mideast tour to the kingdom and the UAE on Monday, due to the recent escalating tensions between the US and Iran. He is also expected to promote an international alliance against Iran.

Following the meeting US Secretary of State tweeted, “Productive meeting with King Salman bin Abdulaziz Al Saud today to discuss heightened tensions in the region and the need to promote maritime security in the Strait of Hormuz. Freedom of navigation is paramount.”

SPA reported that the talks tackled regional and international issues of common interest without a direct mention to Iran’s recent crisis. However, Pompeo announced earlier that discussions with Saudi and Emirati officials mainly focused on Tehran.

“I’m heading out today. Our first stops will be in the Kingdom of Saudi Arabia and the UAE,” Pompeo announced on Twitter before departing, adding, “two great allies in the challenge that Iran presents, and we’ll be talking with them about how to make sure that we are all strategically aligned and how we can build out a global coalition.”

Pompeo also expressed the US’s readiness to negotiate with Iran.

“I am confident that at the very moment they [Iran officials] are ready to engage with us, we will be able to begin these conversations,” he revealed.

However, he also noted that new US sanctions against Iran would be announced on Monday.

Pompeo’s remarks coincided with US President Donald Trump’s recent statements in which he said that the US is not seeking a war against Iran. However, he also affirmed that the US is “putting major additional sanctions on Iran on Monday.”

“Sanctions come off Iran, and they become a productive and prosperous nation again – the sooner the better,” Trump tweeted on Saturday.

In an interview with FRANCE 24 on Monday, Al-Jubeir said that everyone is trying to avoid a war in the region. However, he noted that Iran kept its aggression and attacked oil tankers in the Gulf twice.

He also accused Tehran of sending “ballistic missiles and drones through its proxies the Houthis against Saudi Arabia’s oil pipeline and the Saudi airport,” according to the interview.

In a Sunday joint statement, “Saudi Arabia, the UAE, the UK, the US expressed their concern over the escalating tensions in the region, and the dangers posed by the Iranian destabilising activity to peace and security both in Yemen and the broader region, including attacks on the oil tankers at Fujairah on 12 May and in the Gulf of Oman on 13 June,” Emirati news agency (WAM) reported.

The four countries called on Tehran “to halt any further actions which threaten regional stability,” and “called for diplomatic solutions to de-escalate tensions,” WAM continued.

Last week, Iran’s President, Hassan Rouhani, said that Tehran is not seeking to wage a war against any nation, adding that despite the US withdrawal from Tehran’s 2015 nuclear deal, Iran is committed to international agreements.

Tensions have been mounting between Washington and Tehran since Trump pulled his country out last year from the international accord known as the Joint Comprehensive Plan of Action (JCPOA), going against the European Union (EU) countries’ stance. This is despite EU pressure in trying to persuade Trump to avoid such an action.

In July 2015, Iran and six nations—China, France, Russia, the UK, the US (under Barack Obama), and Germany—reached a historic deal over limiting Tehran’s nuclear programme in return for lifting sanctions.