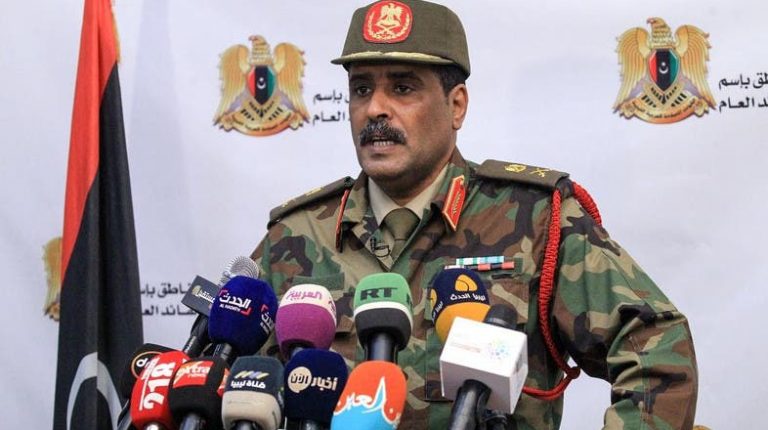 In response to the recently raised Turkish military threats against the Libyan National Army (LNA) headed by General Khalifa Haftar, the Libyan House of Representatives declared on Sunday a general mobilisation countrywide.

The declaration came while the Turkish Defence Minister, Hulusi Akar, is asserting in statements dedicated to the Turkish state-run news agency of Anadolu, that his country will rapidly respond to any attack or threat from the LNA.

“We will respond effectively and with utmost power against any attack or assault” President of the Libyan House of Representatives, Aguila Saleh, who is acting as the commander-in-chief of LNA said.

Escalation between the two countries is on the rise after the official spokesperson of the LNA, Ahmed Al-Mesmari, claimed that several Turkish drones took off from Mitiga International airport and targeted a number of areas located in south-east of the Libyan capital Tripoli, noting that the LNA forces managed to shoot down these drones.

“Since June 27, sovereign Libyan lands have come under illegitimate Turkish aggression which resulted in destructive acts, as a result the LNA’s General Command issued orders to the air force to target Turkish ships and boats operating inside Libyan regional waters” the LNA official spokesperson, Al-Mismari, tweeted on June 28.

The LNA accused Turkey of supporting numerous extremist militant groups, in addition to supporting the Government of National Accord (GNA) which is an interim government formed in Libya under the terms of the Libyan Political Agreement signed in 2015.

In the same context, the Turkish Foreign Affairs Ministry said in a recent statement that the LNA forces are detaining six Turkish citizens and should release them as soon as possible.

It added that in case the release is not conducted, Haftar’s forces are considered a legal target for the Turkish armed forces, however the LNA official spokesperson tweeted that any Turkish nationals on Libyan soil will be arrested.

“All flights from and to Turkey will be suspended and any Turkish nationals on Libyan soil will be arrested” Al-Mismari tweeted.

The six Turkish citizens, who happen to be sailors, were released on Monday, the Turkish Foreign Ministry said.

The Turkish citizens returned to the ship and continued to work at their own will, said the sources.

Tension between the two countries peaked in the wake of military orders out from the LNA leadership to target any Turkish ships that penetrates the regional Libyan waters. These orders came as part of LNA’s strict measures that aim to suspend the flow of Turkish weapons to extremist militias located in the Libyan capital of Tripoli.

Turkey is providing clear support to the GNA which is an interim government formed in Libya under the terms of the 2015 Libyan Political Agreement. This government is incubating a number of militant groups that adopt extreme Islamist ideology, according to charges addressed from the LNA.

Since the ouster of the former leader of Libya, Muammar Gaddafi–who governed from 1969 to 2011–through a popular revolution in 2011, the country is facing a state of chaos and instability due to the spread of numerous militias in different cities such as Islamic State (IS) and Al-Qaeda’s groups.

Two Libyan governments are now in a continuous conflict over power in Libya, the first is the one responsible for forming the LNA, led by Field Marshal Khalifa Haftar, while the second is the GNA led by Fayez al-Sarraj.

The LNA government considers the GNA as a fertile environment for extremists and militants affiliated to the outlawed group of the Brotherhood and the IS.

Moreover, the LNA is addressing charges to Turkey for supplying weapons, drones, and trucks to militant groups that survive under the auspice of the GNA. Turkish support to militant groups is on the rise, despite the international ban imposed on importing weapons to extremist groups in Libya.

In his meeting with Secretary-General of the United Nations, Antonio Guterres, during the G20 summit held on June 28 and 29 in the Japanese city of Osaka, Egypt’s President Abdel Fattah Al-Sisi asserted that Egypt seeks the unity of Libyan territories and the stability in the country, in addition to combating terrorism there.