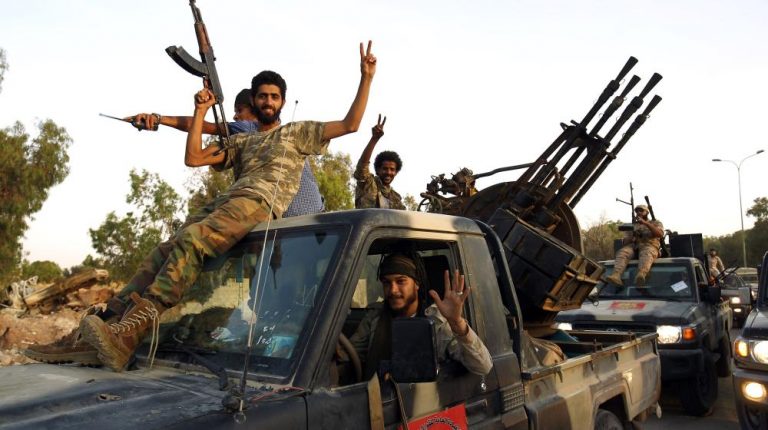 The United Arab Emirates denied, on Tuesday, sending or owning weapons found in the Libyan territories, calling all Libyan entities to end escalation and engage in the political process adopted by the United Nations.

According to a statement from the UAE Foreign Affairs Ministry on Tuesday, the UAE asserted its obligation to UN Resolutions No 1970 and 1973 that are related to arms embargos in Libya. The statement came in response to claims of Libya’s Government of National Accord (GNA) that stipulated finding United States-manufactured weapons used by the Libyan National Army (LNA), headed by Libyan Field Marshal, Khalifa Haftar.

Libya’s GNA noted that these weapons have been sold from the US to the UAE.

Since the ousting of the former leader of Libya, Muammar Gaddafi, who governed from 1969 to 2011, through a popular revolution in 2011, the country is facing a state of chaos and instability. This is mainly due to the spread of numerous militias in different cities, such as the Islamic State (IS) and Al-Qaeda’s groups.

There are two Libyan governments that are now in a continuous conflict over power in Libya, the first is the one responsible for forming the LNA, led by Haftar, and the second is the GNA, led by Fayez al-Sarraj.

The LNA government considers the GNA to be a fertile environment for extremists and militants that are affiliated to the outlawed Muslim Brotherhood and the IS.

Moreover, the LNA is addressing charges to Turkey for affording weapons, drones, and trucks to militant groups that survive under the auspice of the GNA. The Turkish support to the militant groups is on the rise, despite the international ban imposed on importing weapons to extremist groups in Libya.

On Monday, the President of the Libyan House of Representatives, Aguila Saleh Issa, who is acting as the supreme leader of LNA, declared on Sunday general mobilisation around the country.

The declaration came while the Turkish Defense Minister, Hulusi Akar, is asserting in statements, dedicated to the Turkish state-run news agency of Anadolu, that his country will rapidly respond to any attack or threat from the LNA.

“We will respond effectively and with utmost power against any attack or assault,” he said.

The situation between the two countries is escalating as the official spokesperson of the LNA, Ahmed Al-Mesmari, asserted that Turkish drones took off from Mitiga International airport and targeted a number of areas located in the south-east of the Libyan capital, Tripoli, noting that LNA forces managed to shoot down these drones.