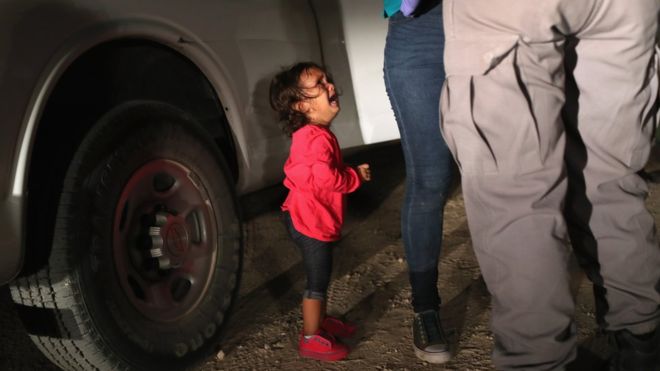 A Salvadoran father and daughter, who drowned while attempting to seek asylum in the US, are the latest victims of a policy that has cost lives and seriously affected the health of hundreds of people, most of them children.

Children have been separated from their parents and kept in steel cages–a brutal aggression against those most vulnerable.

The mistreatment of children and the separation from their parents violates the basic tenets of the Convention on the Rights of the Child (CRC): an internationally recognised agreement which establishes a comprehensive set of goals for individual nations to improve children’s lives.

The next step—so far unfulfilled by the US—is for the president and his advisors to draft a Statement of Reservations, Understandings, and Declarations to be presented to the Senate for its “advice and consent.” Upon Senate approval by a two-thirds majority, the treaty goes back to the president for ratification.

The convention calls for children to be free from violence and abuse, and compels governments to provide them with adequate nutrition and health care. It also demands that children receive equal treatment regardless of gender, race, or cultural background, and have the right to express their opinions, with freedom of thought in matters affecting them. It also addresses the rights of children with disabilities.

In addition, the CRC emphasises the primacy and importance of the role, authority, and responsibility of parents and family and is consistent with the principles contained in the US Bill of Rights.

Given this level of endorsements, why hasn’t the US ratified the CRC?  The convention has found a notable degree of opposition within the Senate and in public, in part from a number of religious groups, as well as among those who claim it conflicts with the US Constitution.

Several among these have portrayed the convention as a threat to national sovereignty, states’ rights, the child-parent relationship, and parental rights. However, Professor of History Emeritus at the State University of New York (SUNY) at Albany, Lawrence S Wittner, has indicated that, although some current US laws clash with the convention’s child protection features, most US laws are in line with the convention.

Regarding the claim that the convention can override the US Constitution, the Supremacy Law of that constitution establishes that no treaty can override it. In addition, the convention does not grant any international body enforcement authority over the US or its citizens. It only obliges the parties to the convention to submit periodic reports regarding progress on the provisions of the treaty.

The Trump administration policy on immigrant children not only does a disservice to children trying to come into the US—it hurts the reputation of the US and its system of justice in the world.

César Chelala is an international public health consultant. He has written extensively on children’s health and on their rights.