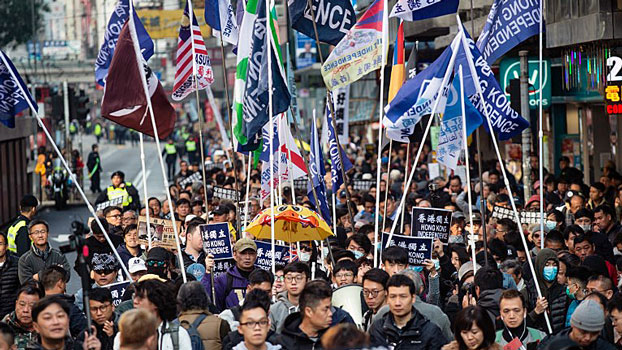 The Hong Kong protests, that began early last month, came to a head overnight on Monday, when protesters used force to break into the legislative council building, during the anniversary of Hong Kong’s handover to China.

The use of force to occupy the legislative council prompted police to fire tear gas to disperse the protesters.

The Chinese government described the violence in the protests as an “undisguised challenge” on Tuesday, saying the occupation and vandalisation of the city’s legislative council by pro-democracy protesters amounted to “serious illegal acts.”

“The violent act of storming the legislative council in Hong Kong constituted serious violations of the rule of law and endangered social order,” said Geng Shuang, the spokesperson from the Chinese Foreign Ministry, according to China Daily.

Millions of people participated in Hong Kong’s protests against a now-suspended extradition bill that would allow people to be sent to mainland China to face trial in courts controlled by the communist party.

Apart from the severe damage caused inside and outside the complex, some computer hard drives were missing after protesters stormed into the building, the police reported on Tuesday.

The police cleared protesters from streets thus breaking their silence over days of pro-democracy demonstrations that have challenged Beijing’s authority over the semi-autonomous Chinese territory.