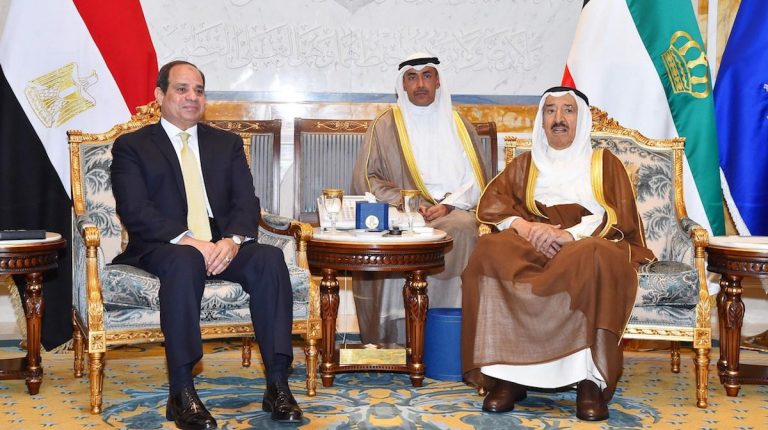 During a phone call on Friday, Al-Sisi reviewed with the Kuwaiti Emir regional files of mutual interest, Presidential Spokesperson, Bassam Rady, said in a statement on Saturday.

Al-Sabah expressed his deep appreciation for Egypt’s efforts in the Arab arena to promote regional and international peace and security.

During the conversation, he strongly hailed the distinguished relations between Kuwait and Cairo, stressing his country’s firm support toward Egypt’s stability and security.

Kuwait is keen on opening new horizons of cooperation with Egypt as well as maintaining coordination and consultation on issues of mutual interest, he added.

Al-Sisi, for his part, lauded the bilateral ties, asserting the need to continue cooperation in all fields.

Also, in a different call, President Al-Sisi reiterated to his United States counterpart, Donald Trump, his country’s supportive stance to stability and sovereignty in Libya, as well as the choices desired by the Sudanese people.

The Egyptian President asserted his country’s support to the Libyan National Army (LNA) in its war against terrorism and militant organisations, who pose a threat to Libya, regional security, and the Mediterranean Sea, the spokesperson added.

Trump, for his part, stressed the importance of reaching a settlement and a solution to the Libyan crisis and concerting efforts in this regard, the spokesperson noted.

Concerning Sudan’s crisis, Al-Sisi highlighted Egypt’s unshakable support to the choices made by the Sudanese people as well as its sovereignty, added the spokesperson.

The Egyptian President also called for not interfering in Sudan’s internal affairs with the necessity of garnering up regional and international efforts to help Khartoum end its crisis and maintain its security and stability for the best interest of its people, the spokesperson said.

During the conversation, the two presidents addressed a number of issues on bilateral and strategic relations binding the two friendly countries, the spokesperson said. He added that they asserted their keenness on developing joint cooperation in various fields and expressed their willingness to work on pushing forward distinguished relations.

Al-Sisi also extended his greetings to Trump over the US Independence Day anniversary, according to the spokesperson.