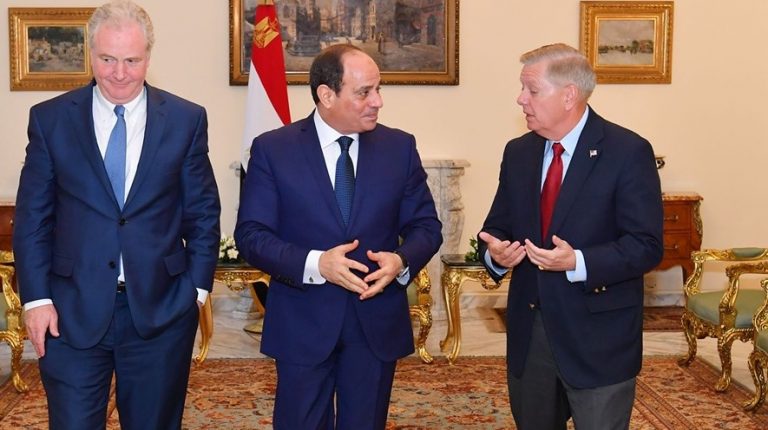 President Abdel Fattah Al-Sisi said on Wednesday the efforts aiming to settle the Palestinian-Israeli conflict must proceed in line with international terms of reference, the two-state solution and the Arab Peace Initiative.
His statements came during his meeting with US Senator Lindsey Graham during the latter’s visit to Cairo, presidential spokesperson Bassam Rady said.
During the meeting, President Al-Sisi asserted Egypt’s support for the various efforts that aim at activating the peace process and resuming negotiations in a way that maintains the Palestinian people’s rights and hopes to establish an independent state with East Jerusalem as its capital.
Al-Sisi also affirmed that the settlement of the Palestinian cause will change the current reality in the region and open up prospects for a new stage of security, progress and peaceful coexistence among peoples of the region.
On his turn, the US senator praised the strength of Egypt-US relations, saying he is looking forward to boosting strategic partnership between the two countries in different fields.
Graham expressed appreciation for Egypt’s vital role as a pillar of security and stability in the Middle East and the Arab world.
He also highlighted Cairo’s efforts to confront terrorism and spread the culture of religious tolerance.
Topics: Abdel Fattah Al-Sisi Lindsey Graham US Senator