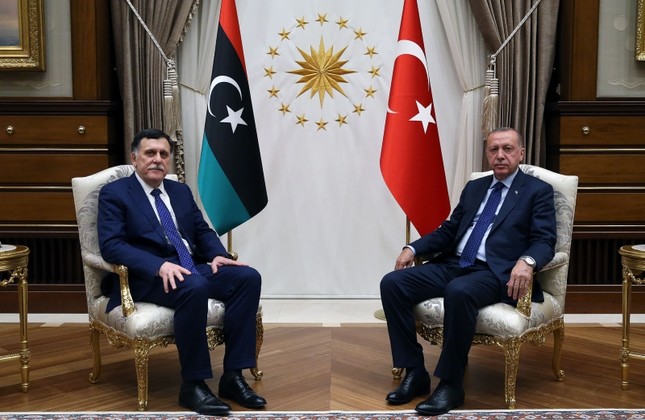 Erdogan met with the head of Libya’s Government of National Accord (GNA), Fayez Al-Sarraj, at Dolmabahce Palace in Istanbul to discuss bilateral relations between Turkey and Libya, recent developments in the north African country, and regional issues.

Last week, in response to the recently raised Turkish military threats against the LNA, the Libyan House of Representatives declared on Sunday a general mobilisation countrywide.

The declaration came while the Turkish Defence Minister, Hulusi Akar, is asserting in statements dedicated to the Turkish state-run news agency of Anadolu, that his country will rapidly respond to any attack or threat from the LNA.

Escalation between the LNA and Turkey is on the rise after the official spokesperson of the LNA, Ahmed Al-Mesmari, claimed that several Turkish drones took off from Mitiga International airport and targeted a number of areas located in the south-east of the Libyan capital, Tripoli. He also noted that the LNA forces managed to shoot down these drones.

The LNA accused Turkey of supporting numerous extremist militant groups, in addition to supporting the GNA, an interim government formed in Libya under the terms of the Libyan Political Agreement signed in 2015.

In the same context, the United Nations Security Council on Friday unanimously called for both sides of the power struggle in Libya to de-escalate violence and return to the negotiating table.