Throughout the past four years, Egypt has been through tough, but necessary economic reforms, undertaken by the authorities and supported by the International Monetary Fund (IMF).

Consequently, since September 2016, authorities introduced the Value Added Tax (VAT) Law, a free-floating currency, reduced energy subsidies, raised interest rates to curb the soaring inflation, and went on a borrowing spree from the IMF, the World Bank, China, and others to finance its ambitious reform programme. 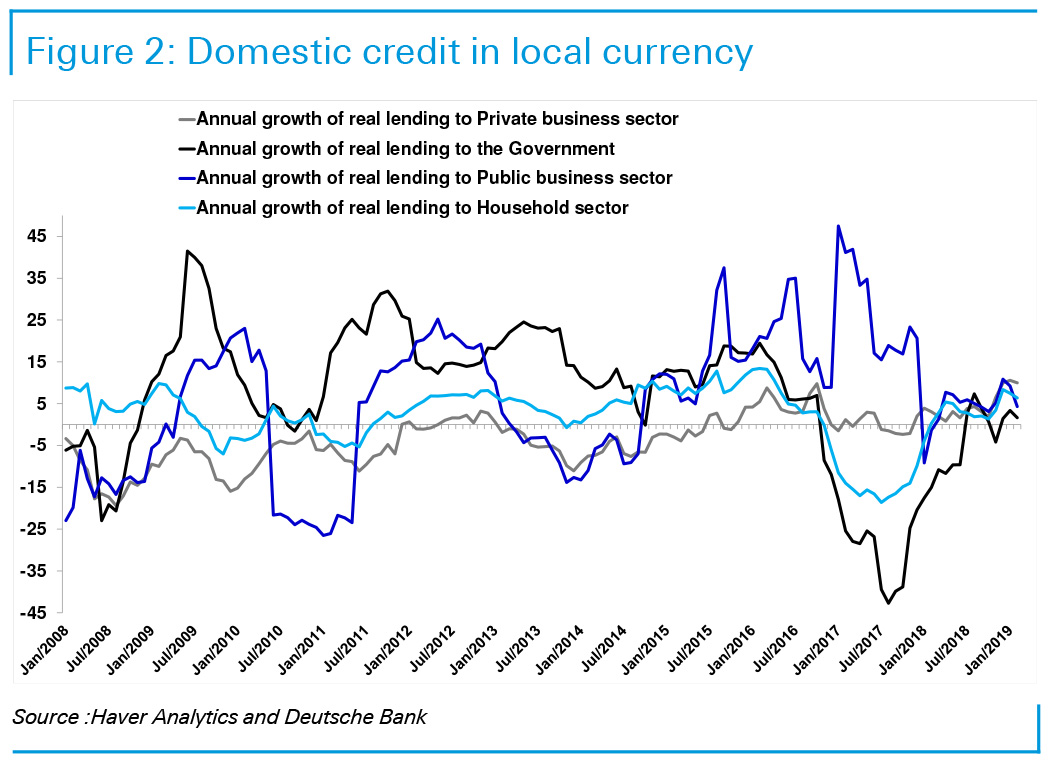 As Egypt is close to the end of the IMF-sponsored reform programme, growth is expected to pick up as monetary conditions ease the Egyptian pound (EGP) strengthening, and private consumption strengthens. However, institutional weaknesses and an unfavourable external backdrop may weigh in on growth, according to a report issued by Deutsche Bank.

Daily News Egypt reviewed the report to get a better understanding of the Egyptian economy’s future.

According to the report, near-term macroeconomic dynamics as the reform programme has been successful in reducing macroeconomic imbalances and improving growth.

The bank foresees growth accelerating in fiscal year (FY) 2018/19 and in FY 2019/20. The second half (H2) of 2019 should see a moderate pickup in economic activity thanks to higher net exports and double-digit growth in gross capital formation.

Overall, the report expects real growth to record 5.5% in FY 2018/19 compared to the 5.3% FY 2017/18, on the back of the increase in net exports, due to the increased competitiveness of Egyptian goods (following the devaluation in late 2016) and due to rising local gas production.

At the same time, large state-led infrastructure projects pertaining to the development of gas fields, construction of a new Capital City, and the development of the Suez Canal (along with the surrounding industrial zones) have given rise to higher capital accumulation and hence higher growth. 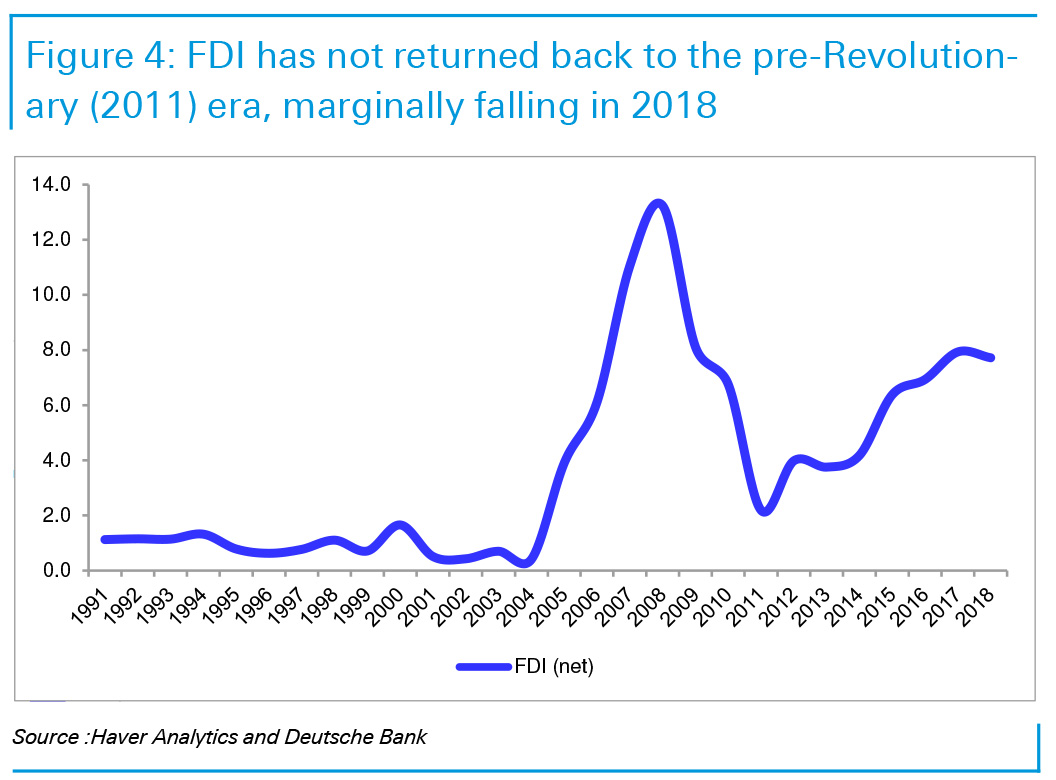 In regard to FY 2019/20, the report forecasts GDP growth to reach 5.9%, backed by the rise in local energy production, continued state-sponsored megaproject spending, and most importantly, the recovery in currently subdued private consumption.

Nevertheless, the bank believes that growth and economic dynamics continue to remain state-led.

According to the purchasing managers’ index (PMI) data, since mid-2016 the non-oil private sector has been mostly in contractional territory except for brief periods.

The Deutsche Bank expects downward pressure on their activity to resume in the coming months as further adjustments to regulated prices will squeeze firms’ margins.

The report indicates that the recent comments by the finance minister that the government is considering a nonfinancial agreement with the IMF did not come as a big surprise.

“Assuming that the country is not seeking more loans from the IMF, we expect to see a deal that is more nonbinding in terms of reforms required to be carried out by officials while it may maintain foreign investors’ confidence about the macro-stability of the economy as the three year programme concludes,” the report indicates.

Inflation accelerated again in May, rising to 14% year over year (y-o-y) from 13% y-o-y in April. The report attributes the rise to seasonal demand pickup that usually occurs surrounding the Islamic holy month of Ramadan.

Furthermore, inflation is expected to rise following the subsidy cuts, on fuel that would automatically link local to global prices, hike in electricity prices by an average of 15% in July, a third hike to water prices, and adjustments to metro and rental prices.

However, the EGP’s appreciation, falling oil prices, and the relatively less aggressive subsidy cuts compared to previous years would mean that inflationary pressures should be more contained. Together with the favourable base effects in the H2 of 2019, the bank forecasts an annual inflation rate of 12.3% for year-end.

With regard to interest rates, the report forecasts that the Central Bank of Egypt (CBE) keeps the monetary easing cycle on hold until the fourth quarter (Q4) of 2019 when a 100bps is highly likely in the November meeting, and expects 200bps in H1 of 2020. 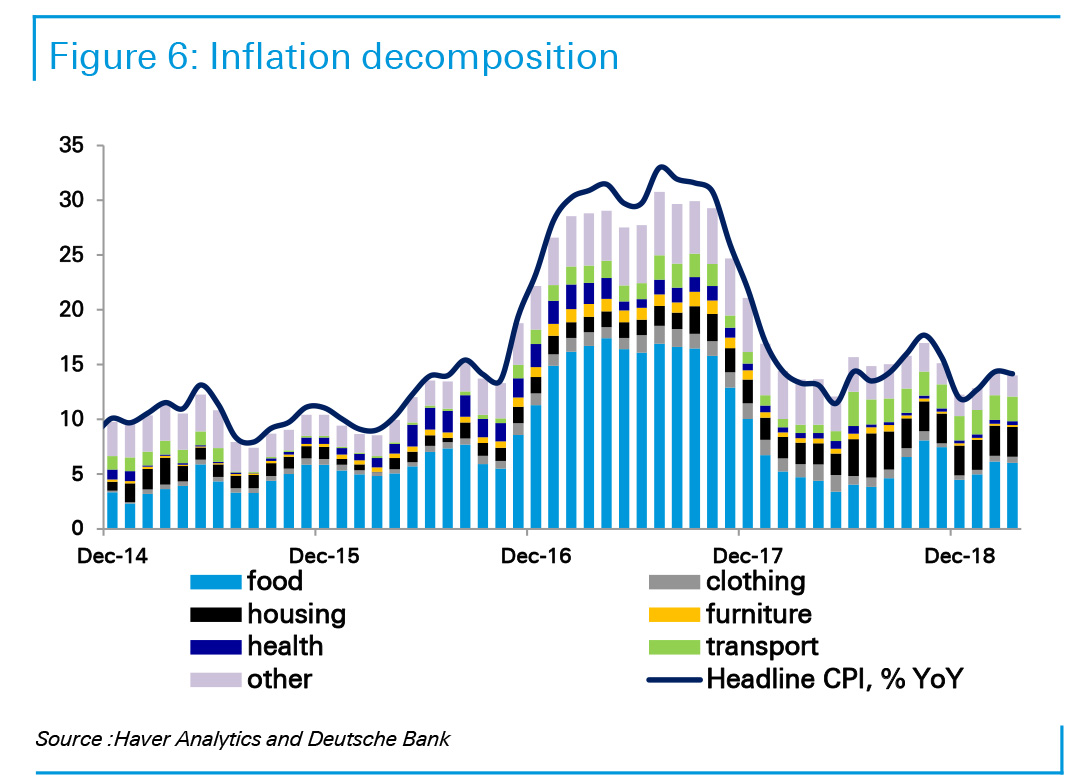 According to the report, the EGP’s appreciation by around 7% since the start of the year was supported by the pickup in portfolio inflows into local debt instruments via the banking sector, the narrowing of the current account deficit, and the continued improvements in traditional sources of foreign exchange such as remittances and Suez Canal receipts.

The report forecasts that the narrowing of the current account deficit should be supportive of the EGP’s value. Additionally, the bank believes that the appreciation coupled with high rates is likely to lead to further foreign exchange (FX) inflows in local debt instruments. Moreover, given the historically high FX pass-through in Egypt, the gradual appreciation would also help with containing inflationary pressures.

Furthermore, the supply the report cites that Q1 saw record gross supply of EGP 509bn (bills and local bonds) – much higher than the planned amount of 474bn – in Q2, we have seen 479bn in issuance so far, in line with the target amount of 478bn.

However, the net supply has been much higher this year, with both Q1 and Q2 seeing a supply of 70bn, versus an average net supply of 60bn in 2018.

“We expect the heavy supply to continue in the next quarter, with a high amount of redemptions coming up. Q3 has 450bn in upcoming redemptions, the highest amount since Q3-2017, and much higher than the 2018 average of 405bn.” 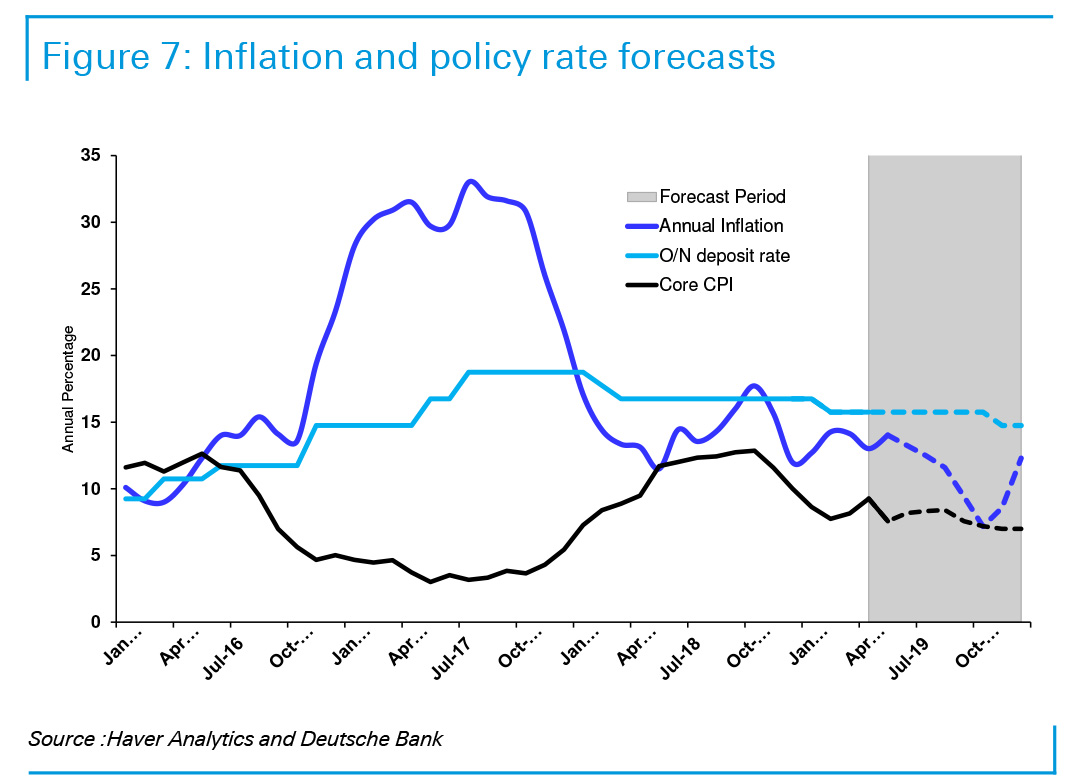 Stay bullish on local assets, however, for now favour bills over bonds

According to the report, despite tighter valuation, the bank argues that with light positioning, strong demand dynamics, a favourable external environment for carry, robust domestic growth dynamics, and falling inflation justifying a cautious easing cycle.

However, the report indicates that to attract much needed further foreign inflows, the CBE has to walk a fine line between cutting rates to support public credit growth while not front-loading the easing cycle to reduce the risk-reward in increasing exposure to Egyptian local market products.

Furthermore, Egypt’s finance ministry has been able to improve their issuance mix by auctioning more bonds. At similar yield levels compared to treasury bills (T-bills), the duration extension of the outstanding debt reduces the roll-over risk, and in the long-term, exposure to “hot-money”.

Accordingly, the report recommends staying bullish on local assets, however, for now favour bills over bonds, as the external backdrop with dovish global central banks remains supportive for frontier markets.

On the domestic side, growth dynamics are robust, as exports, and the current account has improved, tourism is strong, and portfolio flow dynamics is supportive. Although inflation remains a concern, the CBE has managed the challenge.

However, despite meaningful improvement, liquidity in the bonds remains low for now and, given the bank’s view of no cuts before Q4, the report recommends staying in T-bills over the summer months (3m/6m). That said, going into Q4, local bonds in the belly of the curve look attractive to be added to the portfolio mix.

Meanwhile in credit strategy, the report points out that with Egypt having already completed $6.3bn of external debt issuance this calendar year in the form of $4bn in 5,10, and 30-year bonds in February and €2bn of 6, and 12-year bonds in April of this year.

“This said, Egypt’s FY runs from July 1 and ends June. The country has some history of opportunistic issuance in H1 of their FY. Thus, we would not rule out the possibility of more supply in 2019 (from July onward) to capitalise on ultra-low discount margin (DM) yields, especially if country spreads were to tighten from here,” the report concludes.

Foreign investments in Egyptian T-bills up by EGP 10.8bn in May 2019