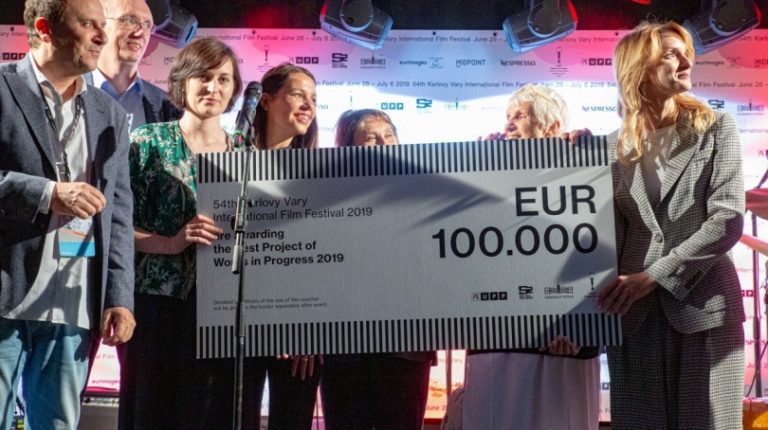 Eastern Promises has the exciting mission of being a bridge between talented filmmakers from the east and their potential western partners, festivals, and audiences. This year, a total of 33 projects were screened on the four platforms dedicated to feature films, documentaries, and new cinematographic forms in development.

The juries announced the winners at the ceremony that closed the festival’s industry programme in Little Versailles in Karlovy Vary tonight and the winners of the Czech round of Nespresso Talents were announced as well.

In this years’ Works in Progress, nine projects from countries of central and eastern Europe, the Balkans, the former Soviet Union, the Middle East, and north Africa were presented.

The jury chose the film Pigeon’s Milk by director Eugen Marian as the winning project. A prize in the value of €100,000 will be given to the project.

The jury said, “our choice went for a film in which we felt the director created a unique realm filled with a prophetic dimension. With strong cinematic language, this first-time filmmaker offers a visual and harmonious world through a story with resonance, announcing a unique voice from a country we do not see much cinema from.”

This year saw a strong selection of eight documentaries from central and eastern Europe, the Balkans, the former Soviet Union, north Africa, and the Middle East.

The Docs in Progress prize went to the winning project The Silhouettes by Afsaneh Salari, Jewel Maranan, and Giles Gardner, along with a cash prize in the amount of €5,000.

The jury said, “the selection was extremely tight, and it took us two hours to decide, as we went through each project thoroughly. The highly current subject of migration is one that we all are familiar with – we discover new angles and uniqueness, while breaking away from an imposed destiny, facing the past in order to continue to the present and on to the future. The ability to talk about your own nation despite the fact that you are making the film in a different country. The director has a clear vision, style, and sensibility. She is capable and willing to invite us to a world that we can all understand and feel.”

On this award, KVIFF has partnered with the Midpoint script and project development programme, as well as When East Meets West co-production market, and Trieste Film Festival.

Together they showcased eight projects from central and eastern Europe that have gone through development within the Feature Launch 2019 programme.

The jury said, “for a story about two characters that are trying to find a place in the world creating a special bond which transcends generations.”

From the eight projects screened this year at the Eurimages Lab Project, the prize in the value of €50,000 went to the winning project Bottled Songs by directors Kevin B Lee and Chloé Galibert-Laîné. KVIFF is the first of four international film festivals of the festival season to be awarding the Eurimages prize – a prize dedicated to films that surpass traditional film frameworks and language and are based on international cooperation.

The Jury’s statement was, “A courageous desktop documentary raising questions of privacy and identity by exploring online propaganda of the Islamic State.”

The topic of this year’s Nespresso Talents – a competition for vertically shot movies by young talents – was “We Are What We Eat”.

The jury awarded the prize of €3,000 to Nina Ovsová and Adela Križovenská, the creative duo behind the animated story called “Tell Me Your Flavour”.

The second place went to another animated film “Hunger” by Jáchym Bouzek, and to David Bukva for “We Are What We Eat”.

Kovář said “it was pretty tough to choose only three finalists from such a diverse group, and the competition managed to attract very original submissions playing with the vertical format.”

Pavlátová also added that, “the awarded films seduced us not only by their high formal level, but mainly their humour, playfulness, and originality used to describe the topic of food. Personally, I was pleased by the proportion and quality of the animated submissions.”