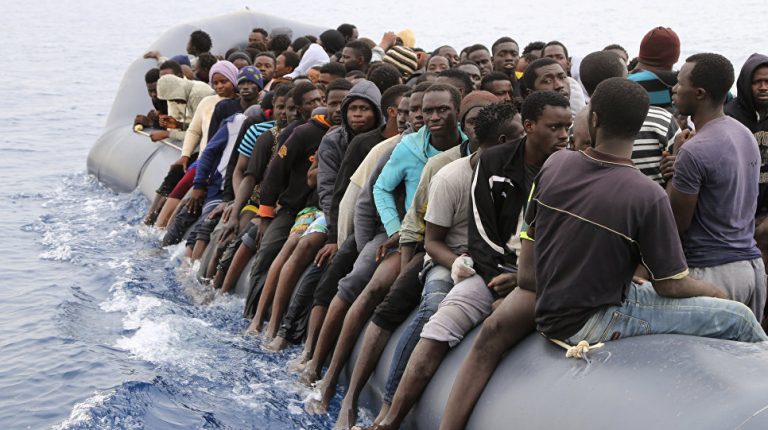 Fleeing from conflicts, wars, and poverty inside their countries, African migrants and refugees risk their lives to face more dangerous conditions in countries such as Libya.

A bloody attack on a migrant’s detention centre outside the Libyan capital last week, which killed scores including children, has shed light on the migrants’ crisis in the war-torn country and their endless suffering to reach a foothold to live peacefully and safely away from conflict zones in homelands.

On Tuesday night, two airstrikes targeted the Tajoura detention centre in the suburbs of Tripoli. One missile hit an unoccupied garage, and another hit a hanger that contained some 120 refugees and migrants, according to the United Nations Office for the Coordination of Humanitarian Affairs (OCHA) in Libya.

Meanwhile, there are also reports that following the first raid, some refugees and migrants were fired upon by guards as they tried to flee the airstrike, the OCHA further revealed.

The migrants’ centre housed more than 600 men, women, and children.

However, Tuesday’s airstrike was not the first, as in May two people were injured in a similar airstrike on the camp, the OCHA pointed out.

The death toll from the Tuesday attacks has risen to 53 people, including six children, while more than 130 others were wounded, as per the World Health Organization (WHO).

There are around 500 refugees and migrants that are held against their will at the Tajoura detention centre, which is close to a military base, the OCHA disclosed.

Libya has become a main crossing point to Europe since 2011 after the fall of President Muammar Gaddafi. However, not all European doors are open.

Italian Interior Minister, Matteo Salvini, has barred boats carrying migrants and asylum seekers from entering Italy’s ports. The country seeks to tackle its long-time headache of migrants crossing the Mediterranean from Libya to southern Italy, who have been smuggled by Libyan gangs over the past few years. 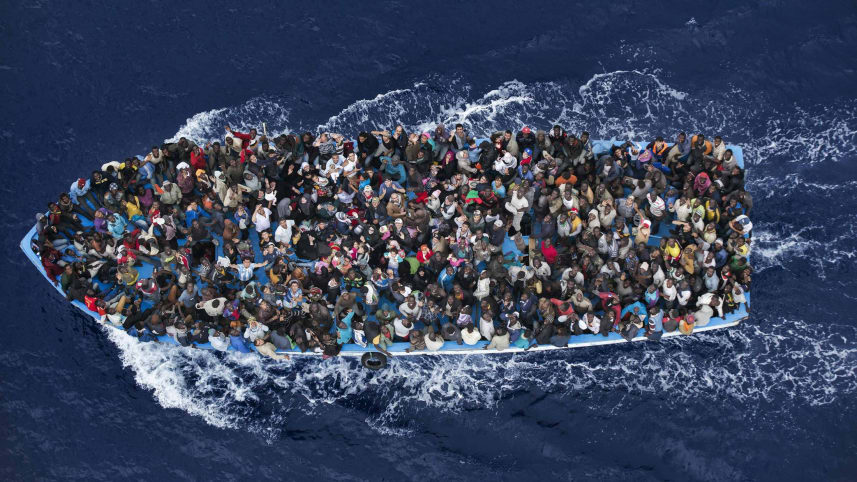 According to the International Organization for Migration’s (IOM) 2019 report, “11,292 migrants and refugees entered Europe until 20 March, by sea through a 13% decrease from the 13,043 arriving during the same period last year.”

“Deaths on the three main Mediterranean Sea routes through just over 11 weeks of the year are at 289 individuals – or less than 60% of the total (499 deaths) recorded on the Mediterranean during the same period in 2018,” the IOM reported.

The IOM also added that, “a total of 398 migrants have arrived by sea to Italy in 2019, according to the official Ministry of Interior figures, while 930 migrants have been returned to Libya by the Libyan Coast Guard.”

Alongside the threat of Libya’s armed conflict, the OCHA explained that migrants and refugees face the risk of being held in detention centres which are characterised “by severe overcrowding, insufficient access to health care, food, clean water, and sanitation facilities.”

The chaos and insecurity in the war-torn state paved the way for networks of migrants’ human trafficking and smuggling to flourish in recent years.

In addition to those held at the Tajoura detent centre, “there are around 3,300 migrants and refugees that remain arbitrarily detained inside and around Tripoli in inhumane conditions,” the IOM and the UNHCR said.

The United Nations have repeatedly expressed that Libya is not a safe place for migrants as the country has become a battleground due to the increasingly ongoing conflict between rival forces.

According to the IOM and the UNHCR, the ongoing conflict in Tripoli “has forced nearly 100,000 Libyans to flee their homes.” The UN humanitarian actors urged all parties to the conflict “to refrain from locating military assets within or near densely civilian populated areas, such as detention centres, and to evacuate civilian persons under their control, including persons in detention, from the vicinity of military objectives to a more secure place.”

They also called for taking all possible measures to ensure that the migrants’ essential needs such as shelter, hygiene, health, safety, and nutrition are met.

Strong condemnations, but no actions

The UN called for an independent investigation into the attack “to determine how this happened and who was responsible”, affirming that it [the attack] “deserves more than condemnation.”

Meanwhile, the UN’s top human rights official, Michelle Bachelet, said on Wednesday that “this attack may, depending on the precise circumstances, amount to a war crime.”

The UN denounced that the attack was carried out “despite the fact that the coordinates of this detention facility and the knowledge that it housed civilians had been communicated to the parties to the conflict.”

The European Union (EU) also joined the UN in their calls for an independent probe into what it referred to as “a horrific attack.”

Consequently, the Chairperson of the African Union Commission, Moussa Faki, strongly condemned the attack, calling for an independent probe to ensure that those responsible for this “horrific crime of innocent civilians,” be brought to account.

On the other hand, the Human Rights Watch (HRW) said that the attack, “should press home the need for the EU to step up efforts to help end the nightmare of migrant detention in Libya, including by demanding an end to abusive detention by Libyan authorities.”

The HRW urged the EU to boost “the resettlement of asylum seekers out of Libya, including directly to EU countries, and increase search and rescue operations at sea and disembarkation in a safe place outside Libya.”

However, the UN Security Council failed on Thursday to condemn the attack after the United States did not endorse the proposed statement.

Earlier, the US condemned the attack on migrant detention. “All parties must urgently de-escalate and return to the political process,” Morgan Ortagus, the US State Department spokesperson tweeted on Wednesday. 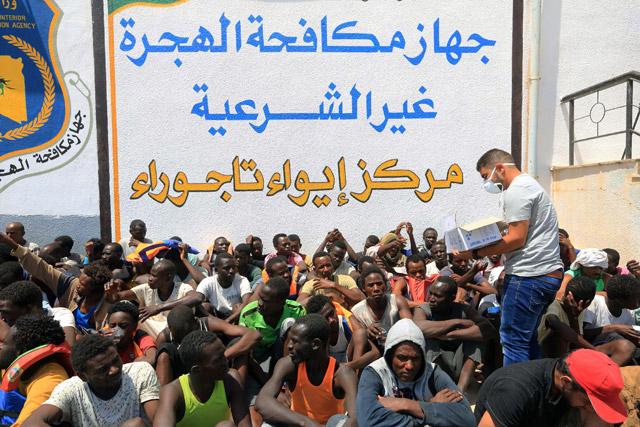 In a tweet, the UN High Commissioner for Refugees, Filippo Grandi, strongly condemned the attack.

“[Refugees] must NOT be detained; civilians must NOT be a target; Libya is NOT a safe place of return. And of course, states with influence must cooperate to end the conflict, rather than fuel it,” he wrote.

Moreover, Jeff Crisp, a research associate at the Refugees Studies Centre at the University of Oxford also tweeted, “the shocking and tragic attack on a detention centre in Tripoli is a reminder of the human cost of the conflict in Libya, as well as the dire and vulnerable situation of migrants caught up in the spiral of violence.”

“I am outraged by reports that dozens of refugees and migrants, including women and children, have been killed and injured by airstrikes on a migrant detention centre near Tripoli, Libya. I condemn this horrendous incident and call for an independent investigation.” António Guterres, Secretary-General of the UN said in the aftermath of the attack.

The International Organization for Migration’s Chief of Mission in Libya, Othman Belbeisi, wrote, “our doctors and nurses who were in Tajoura last night describe the situation as catastrophic.”

“The targeting of civilian lives is a crime and immediate action is needed. This is another example of the suffering of migrants living in countries of crises,” Belbeisi continued.

The Tripoli-based Government of National Accord (GNA), which is backed by the UN, has blamed the Libyan National Army (LNA) and its commander, Field Marshal Khalifa Haftar, over the attack.

However, LNA spokesperson, Ahmed Al-Mesmari, denied any responsibility for the attack on the migrants’ centre, blaming armed factions loyal to the GNA for the airstrikes.

Since the fall of Gaddafi, Libya has remained in chaos and is divided between two governments. The oil-rich country has been suffering from a financial crisis due to clashes between militias and forces loyal to these governments.

In April, Haftar, whose forces control much of the east and south of Libya, launched an offensive to seize Tripoli, the base of GNA. Since the offence began, 443 people have been killed and 2,110 injured, according to the WHO.