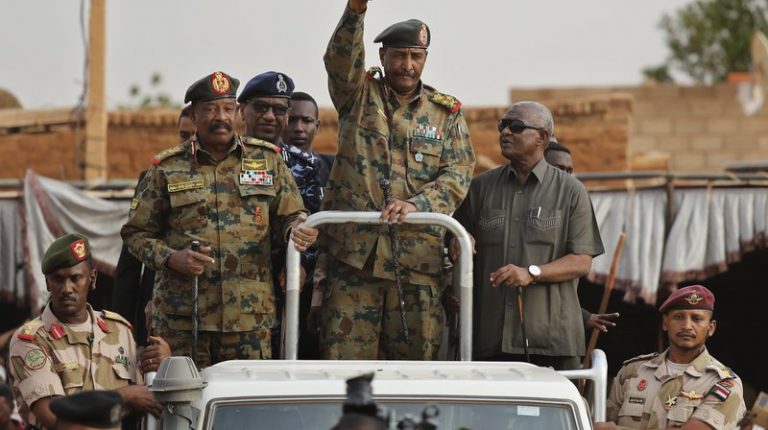 Head of the Sudanese Transitional Military Council (TMC), Abdel Fattah al-Burhan, said that numerous coup trials against the council took place recently, the last one was on Sunday, accusing entities that he preferred not to name of being responsible of the failure of talks between the council and the opposition.

According to his statements during an interview with the Saudi newspaper of Al-Sharq Al-Awsat, Al-Burhan asserted that the council is determined to achieve real partnership and co-operation with the Declaration of Freedom and Change Forces (DFCF) that is representing the Sudanese revolutionists.

“Since the start of the revolutionary movement, we, the members of the Sudanese TMC, pledged to open dialogue with the DFCF. However, we witnessed the occurrence of several troubles that created a gap between us. Now, we are back to work as partners. We work hard to save our country and secure a prosperous future for it,” al-Burhan explained in an interview.

He added that there are ongoing investigations to reveal entities that deliberately hinder dialogue between the TMC and the DFCF.

“There are some people who have been arrested and are now under investigation. Many coup trials took place recently, the last one took place on Sunday.”

Al-Burhan expected that a deal between the council and the DFCF may be signed by the end of this week after the legal committee assigned to draft this deal finish its work and clarified features of the rule in the country.

On the recent violent clashes that followed the dispersal of a sit-in organised ahead of the headquarters of the Sudanese TMC, Al-Burhan asserted that no orders have been issued from any member of the council to disperse the sit-in.

“Probably some forces deviated and entered the sit-in site,” he said.

He further stressed that the Sudanese military forces will stay in Yemen as long as threats are on the rise and reasons that pushed Sudan to interfere are still present.

“I don’t think that there are thoughts to withdraw the Sudanese forces from Yemen,” he added.

Al-Burhan noted that he personally does not want to play any political role after the end of the transitional period. He added that the same plan is applied with the other members of the TMC.

“We called anyone who played a role during the transitional period not to participate in the upcoming stance. We called to write this down in the planned agreement,” he said.

Since June 8, the TMC is the current military junta governing Sudan, the council was established on April 11, 2019 after the 2019 Sudanese coup d’état.

It is formally headed by Abdel Fattah Al-Burhan, inspector of the armed forces, after Ahmed Awad Ibn Auf resigned as leader a day after the coup.