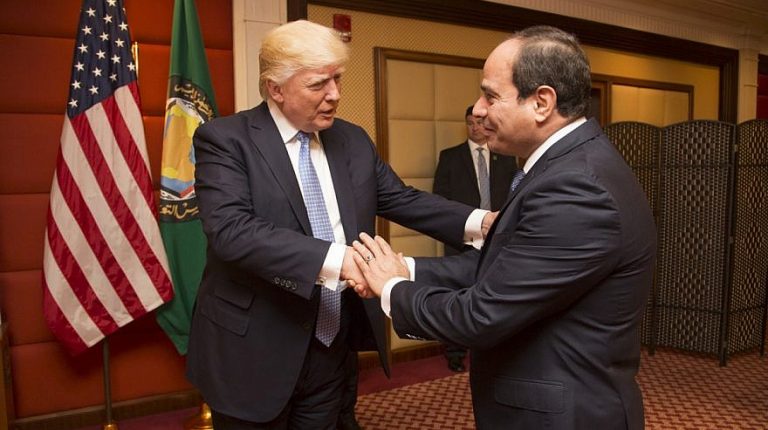 Economic and diplomatic experts agreed that boosting Egypt-United States relations needs to be strengthened over the next period. Daily News Egypt looked into the ways to further promote joint relations with the US with a particular focus on the economic side.

Upon request, DNE received the updated data from the General Authority for Investment and Free Zones (GAFI) showing that United States companies in Egypt reached 1,576 by end of the last fiscal year (FY) 2018/19.

The relations with the US are diversified including political, economic, and military aspects, yet the economic cooperation needs to be better invested, Youmn Al-Hamakki, economic exert said.

The US agreed with Jordon and Morocco to ink a free trade agreement while Egypt has that kind of cooperation with the US, Al-Hamakki explained.

Recommendation for benefiting from the QIZ

“Egypt, the US, and Israel inked the Qualifying Industrial Zones (QIZ) Agreement on December 14, 2004,” she noted, adding, “until now, the QIZ is well used by Israel but Egypt can’t take the full benefits.”

Egypt’s textile exports to the US hiked through the QIZ while other products can’t take the same advantages, Al-Hamakki said as she called on the Egyptian authorities to further improve their benefits from the Generalized System of Preferences (GSP) with the US.

Egypt’s exports to the US hiked by 25.7% in 2018 reaching $1.71bn which represents 5.9% of Egypt’s total exports to the world, the Central Agency for Public Mobilization and Statistics (CAPMAS) said on Wednesday. The CAPMAS added that Egypt’s textile seized the biggest share of exports last year with 46.3% of the whole exports.

The US has terminated the GSP benefits for India due to India’s huge exports’ hike to the US through the programme, Al-Hamakki said.

US President Donald Trump had written to the US Congress on March 4 stating his intention to withdraw the GSP for India, global media reports said in March 2019.

The GSP was established by the Trade Act of 1974 and it promotes economic development by eliminating duties on thousands of products when imported from one of 120 designated beneficiary countries and territories. The GSP Guidebook provides basic information on the programme.

There are over 1,000 registered QIZ companies, of which the vast majority produce textiles and clothing items. Because US tariffs on textile and apparel goods are relatively high, production of these goods in QIZs is particularly attractive. Other eligible sectors include processed agricultural foods, machinery, equipment, base metals, chemicals, plastics, leather, and raw materials such as glassware, marble, and granite.

The US is the world’s biggest power and strengthening Egypt’s cooperation with it will achieve great benefits, Rakha Ahmed, former assistant of foreign affairs minister said.

Presidential visits to the US

In September 2014, Egyptian President Abdel-Fattah Al-Sisi paid his first visit to the US. This was only three months after he assumed his position as the president of Egypt.

During the visit, he attended the 69th Summit of the United Nations General Assembly in New York City, where he gave an official speech. The visit was also ahead of Trump’s election to the US Presidency.

By September 2017, the fifth presidential visit took place during the 72nd Summit of the United Nations General Assembly, where he discussed with the US President several regional and international issues, including ways of reviving the peace process between Palestinians and Israelis.

Deal of the Century

In June, Jared Kushner, Trump’s adviser, arrived in Bahrain to promote the ‘Deal of the Century’, which has not been officially disclosed, but leaks showed that it favours the Israeli interests at the expense of Palestinian rights.

Trump was already proclaiming an “ultimate deal” to end the Israel-Palestine conflict during his presidential campaign in 2016.

The deal, that will allocate $50bn as a start-up fund for the region’s Palestinians, was less than enthusiastically received in Jordan, Egypt, and Lebanon – where leaders in Beirut, not usually inclined to turn away from a $6bn money pot, dismissed the pitch as a shameless bribe.

Economic incentives to integrate Palestinian communities around the region and revitalise the West Bank and Gazan economy were widely viewed as redundant in the glaring absence of a political dimension that could turn such pledges into realities.

Al-Hamakki said that the ‘Deal of the Century’ is not fair as it only benefits Israel, adding, “It lacks details and will fail.”

For his part, former assistant of the foreign minister said the ‘Deal of the Century’ is disappointing, especially because the Palestinians are refusing it along with the Lebanese government.

“The offered funds over the deal raise many questions because it didn’t clarify details on the investments in Sinai. I think that the US looks forward to liquidise the Palestinian issue,” he stated.

Jordan seizes the biggest numbers of Palestinian refugees, Lebanon is second, and Syria is third. The deal does not allocate the finance for the countries according to the numbers of the hosted Palestinian, he explained.

The US used to announce solutions for peace in the Middle East with no added value, he shared, noting, “If the US really targets peace in the region, it should offer a fair plan that matches the international regulations and the past decisions of the United Nations Security Council.”

“The US appointed Thomas Goldberger as a Chargé D’Affaires in Egypt since June 2017. Egypt is a leading country in the region while the US is the world’s biggest power,” he pronounced.

Moreover, the first US diplomatic representative arrived in 1849, 170 years ago, the US Chargé D’Affaires, Thomas Goldberger, said during his speech at the embassy’s Independence Day celebration last Thursday.

Egypt’s revolution against foreign occupation began 100 years ago in 1919. This followed the allied victory in the first world war and President Wilson’s advocacy for self-determination of the countries that had been part of the defunct Ottoman empire.

Egypt got its independence and the first US ambassador presented his credentials to the King in 1922, he asserted, noting that it was also 100 years ago that the American University (AUC) was founded in Cairo.

The AUC is an Egyptian university that continues to bring the principles of US education to so many leaders of the Egyptian government and society, he said.

“Forty years ago, the USAID began its work in Egypt, and it is 70 years since the first Egyptian students went to the US under the Fulbright programme. This set in motion the remarkable development partnership, exchanges, and connections among our people that we benefit from so much today,” he shared.

Private sector cooperation is just as long lasting and has brought considerable benefits to Egyptians as well as Americans, he noted, adding, “This is particularly evident as our economies, trade, and investment boom bring jobs and better lives to millions of people.”

“Looking to the future, we expect many more landmarks, achievements, and anniversaries for our unique and very special nations,” he stated.

The US aid to Egypt goes back to the peace agreement signed between Egypt and Israel in 1979, as Washington is the largest of donor countries to Egypt.

Egypt is the second largest recipient of foreign assistance from the US after Israel as it received nearly $79bn in bilateral foreign aid between 1946 and 2017.

Since 1980 to date, Egypt has received from Washington more than 220 F-16 aircrafts, thus making it the largest user of these aircrafts after Washington, Tel Aviv, and Istanbul.

Washington extended assistance to Egypt and Israel to maintain the peace process between both countries.

All US foreign aid to Egypt is appropriated and authorised by Congress.

Topics: GAFI General Authority for Investment and Free Zones US