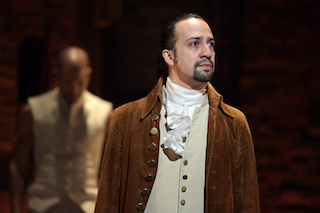 Historical drama is almost as old as theatre itself and continues to play a viable role in contemporary theatre. However, history belongs to those who write it, especially when the author uses his dramatic license to interpret historical facts in response to current events.

That does not mean that there is no historical truth, but it emphasises the fact that history is a constantly evolving, never-ending journey of discovery.

As long as time continues to move forward, history will never settle with only one interpretation. It is exactly this interpretative approach in retelling

American history that makes of Lin-Manuel Miranda’s Hamilton, currently on Richard Rodgers Theatre, one of the most exciting and significant performances of the decade, and the most acclaimed and talked-about musical of the century according to the majority of critics.

The musical show represents the life and times of Alexander Hamilton (c1755 – 1804), who is one of the founding fathers of the United States, the first secretary of the US treasury, and the main founder of the Federalist party.

As a matter of fact, the political and economic greatness of today’s America is the result of Hamilton’s countless sacrifices to champion ideas that were often wildly disputed during his time.

But despite all of his great contributions as an American statesman, Miranda’s show focuses on the fact that Alexander Hamilton is an immigrant who worked desperately to make his adopted country his own. Hence, by this outstanding show, the author retells the story of a nation built by immigrants seen through its most central figure – The man who made modern America, and left an imprint on American institutions still present two centuries after his death despite him being a west-Indian immigrant.

Miranda highlights the idea that everyone in the US is an immigrant of some sort. Thereupon, he retells the founding fathers narrative to purposefully reflect the struggle that every immigrant goes through in American society today, especially in the wake of the Trump-era attack on immigration.

Moreover, he was able to transcend the boundaries of race, culture, and ideology by using a predominantly non-white cast of diverse backgrounds and Rap music.

Obviously, the casting of non-white actors as white historical figures, in addition to using Rap music by its association with black culture to tell the story of the American Revolution, remind audiences that US history is not just the history of white people.

For the author, all Americans have the right to tell the history of their own country   regardless of their various colours, origins, and forms of cultural expression because they all share common national ancestors, whatever their genetic ancestors.

He cunningly could employ and reinterpret the historical facts to empower immigrant populations at a critical time of the US history. Doubtless, the show represents a firm stand against the growing racism, the prevailing xenophobia, and vilification of immigrants in the US society due to Trump’s political practices.

Marwa El- Shinawy holds a PhD in American theatre, and is a member of the Higher Committee for the Cairo International Festival for Contemporary and Experimental Theatre