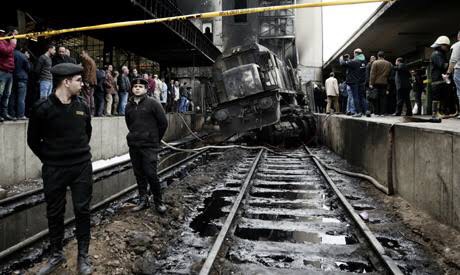 The Cairo Criminal Court held on Tuesday the first trial session of 14 defendants involved in the Ramses train crash, and postponed it to September 1.

The crash left 31 dead and injured 17 others last February.

The defendants are accused of negligence, not abiding by the operation manual, breaching safety rules, and forging the attendance sheet as the workers in charge of surveillance were absent.

The prosecution called upon the judiciary panel while reciting the arraignment in the trial session to issue a ruling of the maximum penalty stated in the law.

Head of the Central Administration for Planning and Maintenance, Saad Seoudi, told the prosecution that the trains contain safety systems that work in case of the fainting or death of the driver.

He added that there were no notices or any defects in the train that slid.

Seoudi clarified that it is the duty of the driver to check the operation and safety appliance of the train he is driving before departure to ensure there are no defects.

The defendants include the drivers and drivers’ assistants of the two trains involved in the crash, as well as a worker tasked with switching junctions and a manoeuvring operator on one of the trains.

Prosecutors have ordered the driver who abandoned his vehicle to be drug tested.

Former Transport Minister, Hesham Arafat, resigned as a result of the crash.

About our unknown heroes