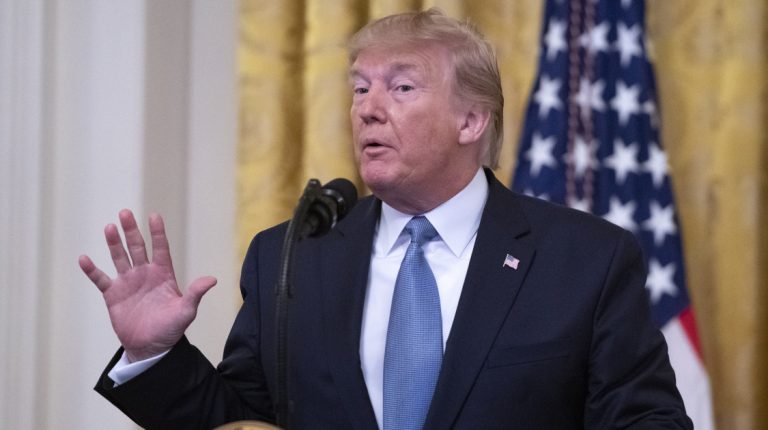 United States President, Donald Trump, emphasised on Monday that Qatar is an important ally to his country, expressing his gratitude for the expansion of the US “Al Udeid Air Base” military base, located southeast of Doha, through Qatari funds.

Trump’s statements came during a speech he delivered in a dinner banquet organised on the occasion of an official visit conducted by the Emir of Qatar, Sheikh Tamim bin Hamad Al Thani, to the US. The visit aims to discuss political, economic, and military cooperation between the two countries.

Trump clarified during his speech that Qatar will pay for the expansion of Al Udeid Air Base, stressing that his country will not pay anything, noting that Qatari investments in the US are considered the largest.

“Qatar provided aid to the US in developing a military facility and airbase with investments that reached $8bn, Thank God, most of these billions were from Qatar not the US” Trump said.

Trump explained that Qatari investments are considered a gateway to afford jobs in his country, asserting that his administration managed to create 160m job opportunities for US citizens, saying that this is considered a record breaker.

Both the US and Qatar agreed previously to expand the Al Udeid Air Base which embraces thousands of US military personnel. It is considered one of the largest military bases in the Middle East as it represents a main point from where US air raids are launched in the region.

The Emir of Qatar said in his speech that relations between Qatar and the US are strategic and witnessed a remarkable development through bilateral discussions between the two countries.

He added that his country is committed to continually develop and enhance the military alliance with the US through expanding the Al Udeid Air Base” to include US forces and their families, in addition to partnering with charities to support US veterans.