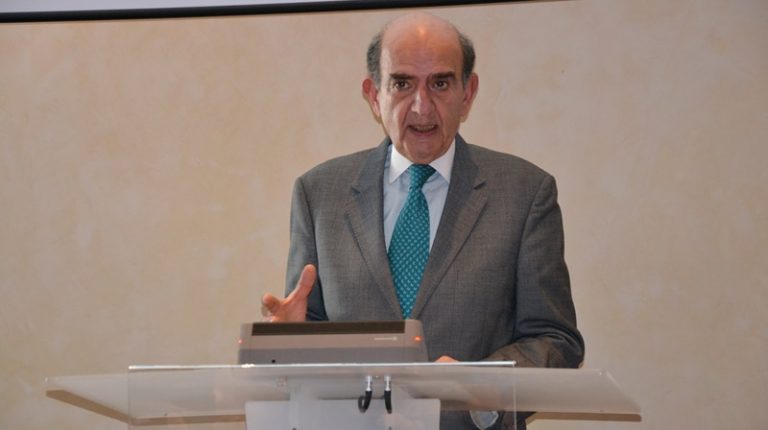 The French Chamber of Commerce and Industry in Egypt (CCFE), seeks new capacity building programmes for the ministries of tourism, health and population, in collaboration with French institutions, Managing Director of the CCFE, Hassan Behnam, said. He explained that the health and tourism sectors are key areas where technical and vocational training are essential to boost these sectors’ performance.

“We hold several seminars to inform French companies about the updates of the political scene. I delivered four speeches in 2019 about Egypt’s economic and geographical potential in France. I am scheduled to give an additional couple of speeches in the next period to convince French companies to invest in Egypt,” Behnam noted.

Daily News Egypt interviewed Behnam to learn more about the chamber’s current activities and plans in the Egyptian market to further develop business relations with France, the transcript for which is below, lightly edited for clarity:

There were many agreements which were signed during Macron’s visit to Egypt; What are the updates of their implementation?

During President Emmanuel Macron’s visit to Egypt in January 2019, both countries signed about 32 agreements, including between government entities and the private sector. The agreements are very diversified such as in the sectors of infrastructure, roads, building materials, tourism, culture, and construction–which is a labour-intensive sector. Renewable energy is key sector for Egypt’s economy where Schneider Electric (SE) is active. SE contributes to a major project, the Benban Solar Park, in Aswan, Upper Egypt. French companies pay attention to the fields of agriculture, health, and education. Health, education, and agriculture are three main areas for French companies. On June 9, 2019, the CCFE organised a major successful conference in the health sector. The CCFE pays great interest to the health cooperation in Egypt and nine French companies announced a health coalition in 2018. ‘A group of French companies announced the establishment of a health coalition–according to a past statement from the ministry of investment and international cooperation (MIIC) on November 20, 2018–noting that companies’ coalition includes Sanofi SA, Danone, AXA, L’Oréal, and others. French companies in Egypt are offering the Egyptian market about 35,000 jobs in the fields of industry, tourism, agriculture, telecommunications, transport, infrastructure, and financial services. French companies increased their investment by $200m during the fiscal year 2017/18.’

How does the CCFE follow up on Macron’s latest visit?

The signed agreements during Macron’s visit are very diversified. We follow up on the business side of the agreements especially in the energy sector with Egypt’s Minister of Electricity and Renewable Energy, Mohamed Shaker. We follow up on the agreements on the agriculture side with the Minister of Agriculture, Ezz El-Din Abu Steit. France is very active in investing in Egypt’s agriculture sector. Agence Francaise de Développement (AFD) implements a programme for Egypt’s small farmers worth EGP 700m. This programme has a very high budget and will be disbursed over several phases. The CCFE’s health committee meets regularly and is very active in approaching healthcare views between Egyptian and French authorities so we have a very close cooperation with Egypt’s Ministry of Health and Population. I believe that the technical and vocational training sector is crucial to the Egyptian economy. We are in discussions with the Egyptian government to boost this kind of cooperation between the Egyptian government and French organisations. 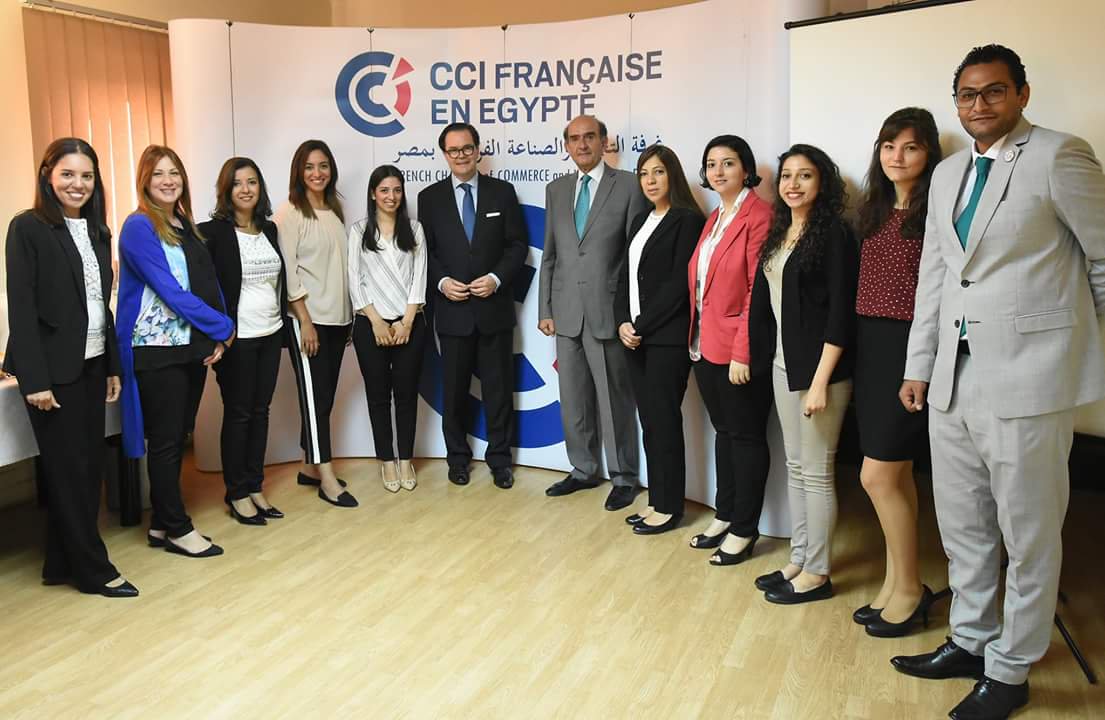 Which areas do you discuss to have new technical and vocational trainings in?

Tourism and healthcare. For example, I discussed with the Minister of Tourism, Rania Al-Mashat, the possibility of inking an agreement with a French institution to implement a vocational and technical training for the employees in the tourism sector, as it is a key field of the economy. Programmes can be implemented here in Egypt or in France as we have not decided yet. The Egyptian economy is moving toward development and so, technical and vocational trainings are crucial in all fields, especially in the tourism and health sectors.

How can the chamber play a vital role in convincing French companies to inject new investments in Egypt?

We hold several seminars to inform French companies about the updates of the political scene. I delivered four speeches in 2019 about Egypt’s economic and geographical potential in France. I am scheduled to give additional speeches in the next period to convince French companies to invest in Egypt.

Are there any upcoming business delegations that the chamber will organise shortly?

I don’t think so due to the summer vacations. Yet, there were a couple of visits to France in January and March 2019. On March 18, I attended a conference in Marseille, France, where I gave a detailed explanation on Egypt’s great potential in the presence of Alexandria Governor, Abdel-Aziz Qonsowa, and the French ambassador to Egypt, Stéphane Romatet. During Marseille’s conference, I suggested inking a twinning agreement between Marseille and Alexandria to allow businessmen to further enhance their collaboration.

When do you expect both countries to ink this twinning agreement between Marseille and Alexandria?

It depends on the procedures, yet the suggestion of a twining agreement between Marseille and Alexandria was very welcomed. We are in close discussions to follow up with the French and Egyptian sides on the timing of inking the agreement.

How many members does the chamber include?

The CCFE includes 713 members, 80% of which are Egyptians and the remaining 20% are French companies. The CCFE was established in 1992, so it is 27-years-old.

What about new French investments and expansions of investing companies in Egypt?

Most major French companies are already investing in Egypt. For expansions, Total Egypt is implementing expansion plans as well as SE and Danone. ‘Total Egypt is continuing to develop lubricants through the development of direct sales to industry, the expansion of its geographic coverage, and the signature of contracts with importers and large automobile dealers. Total Egypt is ranked number two in the car dealer segment behind the market leader. Total Egypt is a subsidiary of Total established in 1998,’ according to the company’s website.

How many French companies are investing in the Egyptian market?

There are about 540 French companies that are in Egypt for both trade and investments, 160 of which are investing in the country. Many French companies come to Egypt to ink deals of trade or investments without informing the chamber. And we are very happy to know that because this reaffirms the importance of the Egyptian market and the direct close cooperation between companies of both nationalities. French investments in Egypt are about €5bn and they are expected to rise following the signed agreements in January during Macron’s visit to Egypt. The views of French companies were positively changed following the November 2016 economic reforms. The policies are improving to eliminate the rooted economic issues since the 1950s. The economic reforms were quite essential to the economy. Over decades, many past governments tried to implement the reforms, yet they failed. If Egypt implemented the reforms in 1977, the situation would have been better now. Egypt’s implementation of its economic programme, in close coordination with the International Monetary Fund (IMF), boosted global investors’ trust in the Egyptian economy’s outlook. The programme caused many Egyptians to suffer following the inflation hike that reached more than 30% but now everything is normalising again. The key to implementing the reforms and gaining its benefits is ‘patience.’ I hope that history will record how Egypt passed through a very tough period from 2016 to 2025 before it moved toward an economic leap. ‘On November 11, 2016, the executive board of the IMF approved a three-year extended arrangement under the Extended Fund Facility (EFF) for Egypt for about $12bn to support the authorities’ economic reform programme. The EFF-supported programme helped Egypt restore macroeconomic stability and promote inclusive growth. Policies supported by the programme correct external imbalances, restore competitiveness, place the budget deficit and public debt on a declining path, boost growth, and create jobs while protecting vulnerable groups,’ according to the IMF.

What is the amount of trade exchange between Egypt and France?

It’s about €2.5bn annually, €1.7bn of the total trade is France’s exports to Egypt. I know that Egyptian exports to France are increasing recently. This is a good sign of the development of the Egyptian economy.

How do you assess Egypt’s investment climate now?

Current updates of the investment climate in Egypt are positive. The MIIC is working hard to further support international investors. The chamber discusses with the Minister of Investment and International Cooperation, Sahar Nasr, and the General Authority for Investment and Free Zones (GAFI) how to attract French companies to manufacture in the local market and export to many African countries in order to benefit from the agreements between Egypt and its African partners. ‘Notably, the 12th Summit of the African Union (AU) kicked off in Niamey, Niger last week, launching the long-awaited-African Continental Free Trade Area (AfCFTA). A number of 54 of the 55 AU member countries have now signed onto the deal, with Eritrea being the only holdout. Considered the largest since the creation of the World Trade Organisation in 1994, the AfCFTA seeks to triple the volume of intra-African trade from 17% to 60% by 2022,’ according to media reports. Egypt enjoys very good potential, including its geographical location, more than 100 million consumers, and positive regulatory framework reforms. Furthermore, Egypt needs new investments and our role, as the CCFE, is to help the government of Egypt attract new investments from France in many key fields for the Egyptian economy. The country solved the three major problems that faced investors before November 2016 which were, foreign currency shortage, lack of security, and bureaucracy. Egyptian authorities are implementing several steps to eliminate corruption and bureaucracy. The MIIC is trying to summarise investment procedures according to the New Investment Law and its amendments. ‘On July 7, the Egyptian Parliament approved the New Investment Law’s amendments, in the presence of Minister Nasr. The New Investment Law was issued as per No 72 for 2017. The amendments include incentives to international companies already investing in Egypt when injecting investments in the neediest areas,’ according to media reports. The MIIC, along with GAFI, will continue working on enhancing the investment regulatory framework in line with international standards, Nasr asserted on July 7. She noted that the MIIC coordinates with other governmental agencies in order to eliminate any obstacles that may face investors in Egypt,’ according to the MIIC.

Opinion| Science has delivered, but will the WTO deliver?

In a climate of intolerance, we cannot call Al-Sisi a failure