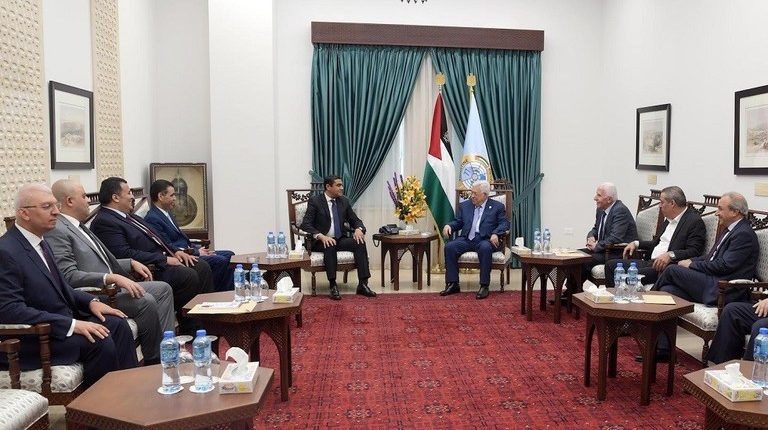 An Egyptian delegation from General Intelligence Service (GIS) paid a visit on Friday to the Palestinian Territories of the Gaza strip and the West Bank. They met with Palestinian President, Mahmoud Abbas, and leading figures of the militant Islamic group of Hamas.

According to the official Palestinian news agency, Wafa, the GIS delegation was headed by Major General, Ayman Badie. He discussed, with the Palestinian President, Egypt’s steps and efforts toward pursing peace talks between Israel and Palestine.

Representatives of the Egyptian intelligence asserted that Egypt will spare no effort to achieve peace between Israel and Palestine based on the two-state solution and the 2002 Arab peace initiative, which aimed to end the Israeli occupation and establish an independent Palestinian state.

The meeting witnessed the attendance of the main members of the Central Committee of the Fatah movement, which represents the Palestinian Authority, and head of the Palestinian intelligence services, according to Wafa.

Meanwhile, the GIS delegation held a meeting during the same visit with the head of the political office of Hamas group, Ismail Haniyeh. Both discussed “understandings with the other side,” according to a statement from Hamas.

The statement was issued directly after the meeting between the group and the GIS delegation that paid a visit to the Gaza strip on Friday. It stipulated that Israel is clearly understanding that resistance in Gaza will not accept anything except ending the siege.

It also noted that the meeting with the GIS delegation witnessed the presence of Haniyeh and the head of Hamas in the Gaza strip, Yahia El Sanwar, and from GIS side, Major Genera, Ayman Badie, who is acting as GIS’s undersecretary.

The statement came after hours from a declaration from the leading figure in Hamas, Fathi Hamad, that his group is affording a timeout for Israel to break the siege imposed on the Gaza strip and to apply the recently agreed upon understandings or Hamas will respond using power against its enemies, according to the statement.