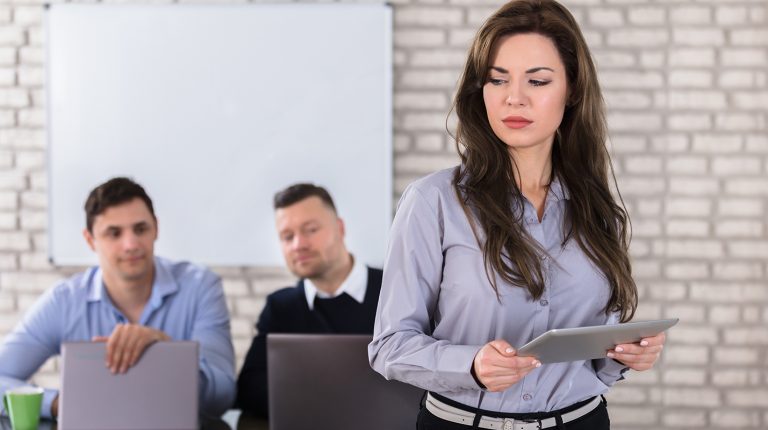 One of the most significant rights for female workers is to be safe and not to be exposed to any form of sexual harassment in workplace.

However, this seems to be a far-fetched demand, as most local workplaces lack the required regulations that criminalise sexual harassment, despite being already criminalised by the Egyptian law punishing the harasser with at least six month in prison, and if he has an authority over the victim, with two years and up to five years in prison, and fines in some cases.

Millions of women around the globe experience sexual harassment in workplace. However, many of them do not speak up fearing negative consequences, such as being accused of fabricating the incident or constructive dismissal.

For Egypt, a study by the United Nations in 2013 showed that 99.3% of women surveyed have been subject to sexual harassment.

Moreover, the New Woman Foundation published a study in 2009 saying that most Egyptian women surveyed in different governates experienced sexual harassment at public and private workplaces, whether verbal harassment, intimidation, or physical assault. The report also found that sexual harassment has nothing to do with woman’s outfit, age, or social class. Some cases of sexual assault and rape were also reported.

Based on the UN’s definition, sexual harassment is any “improper and unwelcome conduct that might reasonably be expected or be perceived to cause offence or humiliation to another person.”

“Harassment may take the form of words, gestures, or actions which tend to annoy, alarm, abuse, demean, intimidate, belittle, humiliate, or embarrass another or which create an intimidating, hostile, or offensive work environment,” the UN added.

It could be unwelcome remarks about the appearances of the female employee, undesired touching, offensive jokes, or inquiring about sex life.

Sparked by the MeToo social media campaign which aimed to combat sexual harassment in the world, the International Labour Organization (ILO) adopted on 21 June 2019 a landmark international treaty against violence and harassment in workplaces.

“Violence and harassment at work constitute a human rights violation or abuse.” It includes any behaviour that is likely to lead to “physical, psychological, sexual, or economic harm or violence, according to the convention.

“Without respect, there is no dignity at work, and, without dignity, there is no social justice,” Director of the ILO’s Work Quality Department at the ILO Centenary Conference in Geneva last month, Manuela Tomei, said.

Aya, a 24-year-old customer service agent introduced by her first name only, as per her request, was delivering food at a luxury tourist resort in Sharm El-Sheikh where she works, when her colleague whispered: “what a breast!”

“I heard him. He was pretending that he was checking food orders. Then when I moved to leave, he intentionally touched me with his shoulder,” Aya told Daily News Egypt.

“I did not realise what happened. I was confused. Later, I met my manager because we had an evaluation meeting. After we finished, I told him about the incident,” Aya narrated.

Aya said she always avoided any contact with this colleague because of his inappropriate behaviour.

Aya’s manager opened an investigation into the case. Unfortunately, the administration said that they could not fire or punish him because he denied the harassment and she had no eyewitness to prove what happened.

“During the investigation, I was confused and anxious. My words were out of order so they felt like I might have misunderstood what happened, or wrongly read the situation,” Aya continued.

“I was suspended from work for a day. I am the victim, the one who was sexually harassed and now I am accused of fabricating the incident.”

Aya was blamed because she waited for almost two hours until she decided to speak up about what happened.

“They said if you screamed or called for help, then you could draw anybody’s attention, but now we cannot do anything to him,” she added.

Eventually, the investigation was closed and both were asked to return to work. “I refused the decision. This is not fair, I told them, and I will consider resigning.”

“I am not safe anymore. I do not easily recover from harassment. I have experienced sexual harassment in my childhood and even until now in the streets and transportation services. I faced horrible situations, but this is different, this is where I work and where I should be protected,” Aya noted.

“I respect my body”

It has been almost 11 months since May El-Shamy, a 29-year-old journalist, was dismissed from her work after reporting a sexual harassment incident from her manager.

“I have fought to protect my body, my body is a red line,” El-Shamy told DNE. “He [the accused manager] was always stalking my body, with inappropriate stares and sexual comments,” El-Shamy added.

El-Shamy experienced sexual harassment from her manager, however, she requested not to mention the details of the accident, as she already filed a lawsuit and an investigation is being carried by the public prosecutor.

Moreover, El-Shamy reported the incident to her work’s administration. They offered her an apology from the alleged harasser, but she refused, demanding an announced salary deduction for this manager. Her request was rejected.

They gave her two weeks off. Then after she returned, she was denied entry to her workplace. “I was unfairly dismissed from my work after I filed my complaint. I filed a lawsuit against the manager and a complaint against the administration over my unjustified dismissal,” El-Shamy said.

She took all the required legal procedures to hold her manager accountable. Despite the consequences, El-Shamy never regretted that she spoke up.

“The only thing I regret is that I did not go immediately to a police station and file a report,” El-Shamy shared.

El-Shamy spent 11 months at home jobless. She applied at other places but they dropped her application when they knew she left her previous work after reporting sexual harassment.

“I do not mind starving, but I could never accept to lose my self-respect, I did that because I respect myself,” El-Shamy concluded.

May Adam, a 24-year-old illustrator and technical support agent, was working at a prestigious company where one of its managers was accused of harassment. “His stares and comments on every female employee’s appearance were aggressive and considered sexual harassment,” Adam told DNE.

She and her colleagues used to ignore him, but when he inappropriately touched one of them, they decided to speak up and file complaints. An investigation was carried by an HR female employee, but the women who filed the complaints were threatened to drop their complaints or they will lose their jobs.

“The administration told us that he did not intend to do this, and if they insist to continue their claims, they could lose their jobs,” Adam noted.

Eventually, nothing happened and some female employees were transferred to another department. The manager was not punished, and he sometimes harass other women, Adam noted.

After a while, Adam decided to leave her job as she could not stand this work environment. “This was the worst environment in my career; they chose to cover up a harasser instead of punishing him. I am still recovering from the trauma I got from this place,” Adam illustrated.

Marwa Fawzy, a 27-year-old marketer, also experienced sexual harassment at her work. She said that in her previous work –a prominent company– her male colleagues used to say sexual comments about her just because she smokes and has tattoos.

“I was the only woman in the team. They were gossiping about me. When I got married, they hinted that I was pregnant before marriage and feared a scandal,” Fawzy recalled.

For a safe work environment

As sexual harassment at workplaces is mounting in Egypt, some civil society organisations have provided advice for women if they face harassment.

“Any female worker facing any type of sexual harassment accompanied by threats to prevent her from promotion if she rejects, she must be aware that the harasser is a coward, and she must call for help and draw people’s attention,” Intsar El-Saed, a lawyer and the head of the Cairo Center for Development, told DNE.

Many harassers take advantage of the fact that women will not speak about the incident whatever they do and that females will be afraid and confused, El-Saed added.

“Any woman facing harassment has to threaten the offender that she would file a complaint at the work administration or police. Women have to document everything about the incident because they will need it in the investigation,” El-Saed asserted.

Meanwhile, the lawyer emphasised the need for eyewitnesses. “She might tell trusted colleagues about incidents as harassers might repeat the action with them too,” El-Saed added.

El-Saed pointed out that if a female worker was unfairly dismissed from work due to complaining about harassment, she can file a lawsuit against the company.

For a safe work environment, El-Saed asserted the need to set firm regulations, policies, and sanctions to prevent harassment.

All male workers have to be trained and prepared on professional communication with their female colleagues. “The whole world is heading to adopt anti-sexual harassment policies. This must stop,” El-Saed concluded.