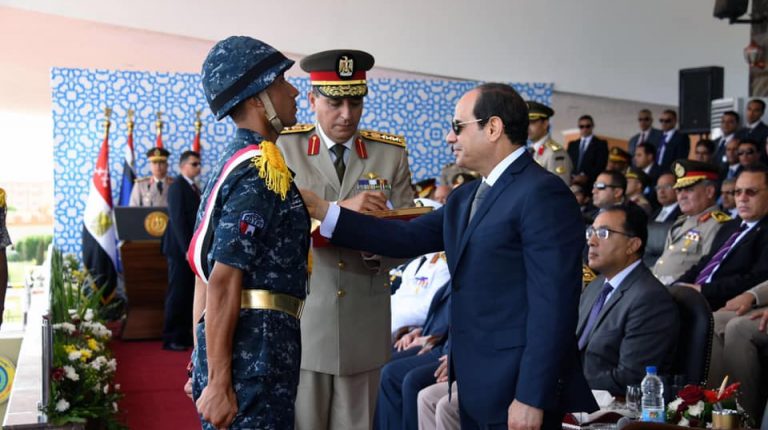 The celebration was aired through the state-run TV channels and witnessed the performance of a number of athletic activities that demonstrated the level of the fitness of the new graduates and the proficiency of the military training they received during their training.

Throughout the celebration, Al-Sisi honoured the family of First-Sergeant Ahmed Abel Azim who was killed in a clash with drug smugglers in Siwa oasis, and the new batch of graduates were named in his name aiming to honour him.

Head of the Non-commissioned Army officers Institute, Haitham El Sayed, asserted in a speech he delivered during the celebration that Egypt’s army is considered the first systematic army in history and is currently subjected to unprecedented development in training and reinforcement.

“Egypt’s army is the shield of the homeland, it protects citizens and seeks the prosperity of the country,” he said.

The Non-commissioned Army Officers Institute was established in 1954 in Upper Egypt’s governorate of Assiut, before being moved to the governorate of Ismailia and inaugurated by President Abdel Fattah Al-Sisi.

The new institute is established on area of 600 feddan to accommodate 8,000 students. The institute witnessed a development in the establishment of educational, administrative, sports and recreational facilities, including classrooms equipped with the latest technological applications, information systems, replicators and teaching aids.

Moreover, a complex of specialised training fields has been set up, beside the development of physical fitness halls and the establishment of two integrated sports clubs, including a sports stadium and a fully equipped Olympic swimming pool, as well as 10 pitches, basketball, volleyball and tennis courts, with 2 training pools and 2 recreation and social facilities for students.

The development work extended to administrative and medical insurance within the institute through the establishment of an integrated hospital for students and accommodation, in addition dining halls equipped with all required equipment to provide the highest levels of care for students throughout their studies at the institute.