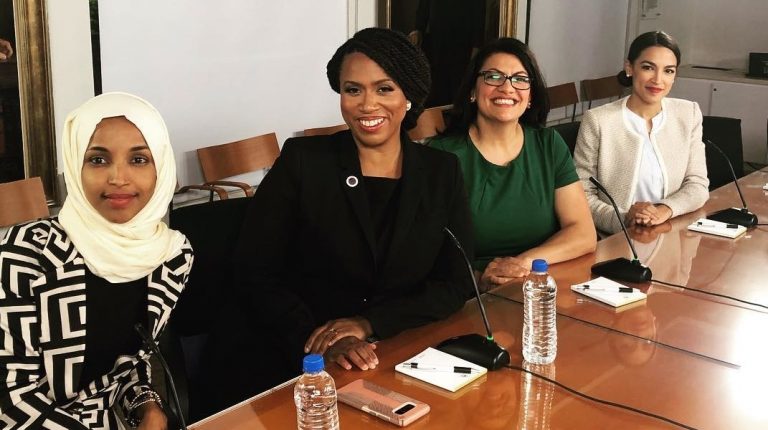 United States President Donald Trump has been accused of racism after posting tweets attacking four Democratic congresswomen, two of whom are of Arabic origin on July 14. In his tweets, he said that the four-congresswomen came from the worst, most corrupt countries and suggested they to “go back”, according to the BBC website.

The tweets were directed at four congresswomen, after Nancy Pelosi, the speaker of the US House of Representatives, clashed with the four women over a border security bill, one week ago.

Although Trump did not mention the names of the women he tweeted about, he referred to Pelosi in the tweets thus making the link clear.

The women are Alexandria Ocasio-Cortez, Rashida Tlaib, and Ayanna Pressley, who were born in the US, and Ilhan Omar, who came to the US as a refugee. They have all called the president racist, and have been backed by members of the Democratic Party.

Tlaib was born in Detroit to Muslim, Palestinian immigrants and Omar was born in Mogadishu but her family fled Somalia to the US to escape the war.

In a three-tweet thread, Trump accused the four congresswomen of viciously criticizing the US policy saying, “So interesting to see “progressive” Democrat congresswomen, who originally came from countries whose governments are a complete and total catastrophe, the worst, most corrupt and inept anywhere in the world (if they even have a functioning government at all), now loudly and viciously telling the people of the United States, the greatest and most powerful Nation on earth, how our government is to be run.”

He added, “Why don’t they go back and help fix the totally broken and crime infested places from which they came? Then come back and show us how it is done. These places need your help badly, you can’t leave fast enough. I’m sure that Nancy Pelosi would be very happy to quickly work out free travel arrangements!”

However, Pelosi came to their defence as she described Trump’s tweets as “xenophobic” saying “When Trump tells four American Congresswomen to go back to their countries, he reaffirms that his plan to “Make America Great Again” has always been about making America white again.”

She added “I reject Trump’s xenophobic comments which are meant to divide our nation. Rather than attacking members of congress, he should work with us for a human immigration policy that reflects American values, stop the raids.”