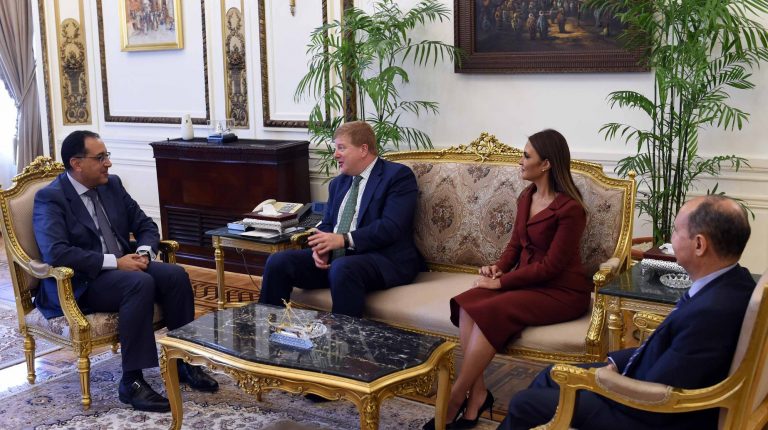 Egypt’s Prime Minister, Mostafa Madbouly, met on Tuesday with the Executive Vice President of the United States’ Chamber of Commerce (AmCham) Myron Brilliant, in the attendance of the Minister of Investment and International Cooperation, Sahar Nasr, and Minister of Trade and Industry, Amr Nassar, the cabinet said in a statement.

The meeting tackled the enhancing of the participation of the private sector in economic and trade projects and activities in both countries.

Mabouly and Brilliant highlighted the need to bolster bilateral cooperation in various fields including energy and health sectors, as well as increasing investment opportunities.

Earlier on Monday, Egypt’s President, Abdel Fattah Al-Sisi, also met with Brilliant, where he affirmed the significance of the role of the AmCham in promoting economic and trade relations between the two nations. Al-Sisi further asserted his keenness to communicate with representatives of American vital economic sectors to enhance mutual cooperation.

Meanwhile, Al-Sisi confirmed that enhancing trade and investment with the US will broaden prospects of cooperation at all levels, adding that Egypt looks forward to optimising economic relations between the two countries in the coming period, the statement highlighted.

Al-Sisi also emphasised “The importance of the private sector in supporting mutual relations through increasing investment, transferring knowledge and expertise, and enhancing the exchange of trade to serve the interests of both sides.”

For Brilliant, he praised the positive recent updates of the Egyptian economy, which he viewed as a sign that reflects the stability of the economic and investment climate in Egypt.

The meeting also tackled “trilateral cooperation in Africa and mutual interest in enhancing it, particularly in the areas of the digital economy, health and energy, in light of Egypt’s current chairmanship of the African Union,” the statement noted.

“This is in addition to recently launching the African Continental Free Trade Agreement that will establish the largest free trade area in the world,” the statement concluded.

The trade volume between Egypt and the US approached $3bn during the period from January to April 2019, up 27% when compared to the same period in 2018, the new President of the AmCham Egypt, Sherif Kamel, told Daily News Egypt earlier in July.

Kamel added in an exclusive interview that both countries have been enjoying a long strategic partnership for many years. “We have a good, evolving and promising economic story to share with the US business community which can lead to more cooperation in different sectors of the economy,” Kamel highlighted.