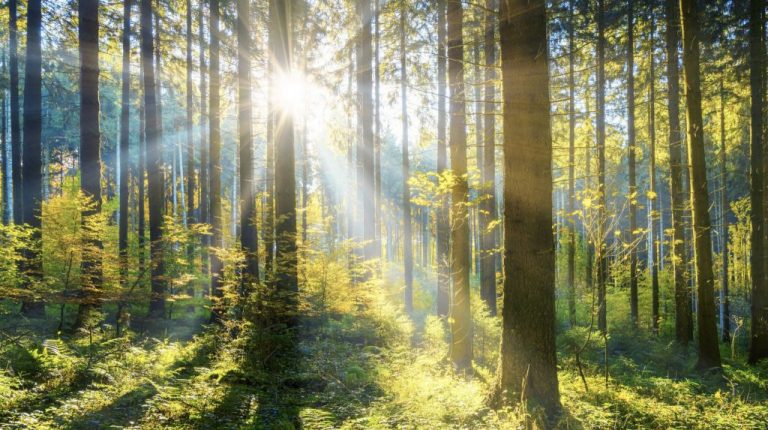 But a recent study suggests trees can help curb climate destructiveness by planting nearly 1bn hectares of forest (0.9bn). According to a recent study published by Science Advances, this number of trees could remove two-thirds of human-caused carbon emissions into the Earth’s atmosphere since the 19th century. These new forests can store 205bn tonnes of carbon of the total of carbon emissions which are about 300 gigatonnes.

According to a study prepared by researchers from the National Centre for Oceanography in the UK, published by the Environmental Research Letters journal last July, in the absence of access to pre-industrial temperatures, floods caused by sea-level rise can cost humanity $14tn annually by 2100.

Planting billions of trees around the world is the best and cheapest way to tackle the climate crisis, especially since these trees can be planted without encroachment on crop land or urban areas, according to the study which is prepared by researchers from the Eidgenössische Technische Hochschule Zürich (ETH Zurich).

The study also suggests that there is greater potential for planting trees in agricultural and urban areas, giving city trees a key role in reducing the impacts of climate change. Researchers warn that increasing global warming could cut the area available for forest restoration by one-fifth by 2050.

“The study is the first of its kind to link the direct measurements of the number of trees with environmental characteristics to provide globally clear quantitative estimates of the expected tree cover,” said Thomas Crowther, from ETH Zurich and co-author of the study.

Using global data on soil and climate from satellite images, especially those provided by the open-access Google Earth software, researchers analysed tree cover in protected forest areas that were not significantly affected by human activity, from the Arctic tundra to tropical rainforests.

The research team analysed nearly 80,000 high-resolution satellite imagery and climate models to determine the number of trees suitable for each ecosystem by studying the properties of soil and climate.

“The potential for tree planting can be done effectively throughout the world, as the potential exists literally everywhere in the world. The most fortunate areas for carbon capture are the tropics, where forests cover much of the region,” said Crowther.

At the beginning of 2011, 48 countries joined the Bonn Challenge, which was launched in the German city of Bonn with the aim of planting 350m hectares of forest by 2030 and restoring 150m hectares of degraded land by 2020. But the research team found that more than 43% of these countries have committed to recovering less than half of the area suitable for forest planting, while only 10% have pledged to reclaim much more land suitable for forest growth.

According to the study, there are six major sites that make up only half of the proposed sites for planting forests in varying proportions depending on the size of each country and its climatic conditions and soil quality.

The study warns that some of the current climate models have overshadowed a positive impact of climate change, claiming the increase of the global cover of trees. While there may be an increase in the area of ​​Arctic forests in coastal areas such as Siberia, the average tree cover is only 30-40%.

According to the current study, this is a very small gain when compared to losses in tree cover that will be caused by dense tropical forests, which usually have a tree cover density of 90-100%.

According to the study, of the 1.6bn hectares, just 0.9bn hectares (bigger than the US) could remove two-thirds of the anthropogenic pollutants that have been emitted into the Earth’s atmosphere since the 19th century.

Forest farming will not only remove carbon, but it can also provide a host of additional benefits, including support for biodiversity, improved water quality, and reduced erosion processes which lead to coastal erosion due to the invasion of seawater.

Crowther pointed out that the cultivation of agricultural crops within the proposed forest area was not included in the calculations of the study.

The researcher expected the cost of growing a single tree to reach around $0.30, which means that the cost of the proposal could be as high as $300bn, a figure Crowther does not consider significant.

The study suggests that the planting of so many trees proposed in the study will take decades to grow new forests, so other solutions must be pursued to combat climate change and protect existing trees.

Joeri Rogelj, professor at the Institute for Climate and Atmospheric Studies at the University of Zurich, Switzerland, said: “It is necessary to reduce carbon dioxide emissions to zero,” and that there are many ways to achieve this goal.

One of the most important of these is introducing cleaner alternatives, such as renewable energy, to replace the traditional energy pojects that causes emissions, such as coal-fired power plants, according to Rogelj, or combining them in so-called negative emission technologies.

Robin Chazdon, an environmental scientist at the University of Connecticut, said that the study is scientifically sound, but it shows only the extreme biological potential of tree growth in forests around the world. Forests do not necessarily grow in all places where this is biologically possible. There are many social and economic things to consider. Chazdon did not take part in the study.

“Forest restoration is one of the important solutions to mitigating the effects of climate change, reducing the risk of extinction of many species and reducing the water deficit,” added Chazdon, noting that “appropriate trees need to grow in the right place and in the right way, putting the local people into consideration”.

The researcher believes that the restoration of forests takes a long time, and it is not a quick solution to address climate change.

Pedro Brancalion, a professor of forest science at the University of São Paulo and a researcher who is not involved in the study, agrees with the opinion of Chazdon about the time required for forest restoration.

“The methodology used in the study is entirely new, but simple, and it gives a valuable contribution to understanding the current and potential distribution of trees on the ground,” Brancalion told Daily News Egypt.

The restoration of forests is essentially a human activity, not only related to natural and vital characteristics, but also to social and economic characteristics. Thus, “The study is very important to simulate the cover of trees and the impacts of climate change, but social and economic factors should be addressed in order to provide a realistic perspective for forest restoration,” he stressed.

In early July, Brancalion and Chazdon, together with others, also published a study in Science Advances that tropical forests in particular need to intensify recovery efforts. Tropical forests worldwide lose about 158,000 square metres per year, reaching their highest levels in 2016, by 259,260 square metres, according to the study.

As per a study published by the Nature Sustainability journal in February, China and India are world pioneers in greening the earth, where they absorb one-third of new forests, cropland, and other plant species monitored worldwide since 2000. According to the study, China alone holds a quarter of the world’s green area, although it contains only 6.3% of the world’s land area. The study found that 42% of China’s green areas come from forest expansion while 32% comes from farmland. In India, 82% of green areas come from new agricultural land.

In Belize, farmers turn away from slash and burn agriculture

AfDB has supported Egypt with $1.5bn over past 3 years