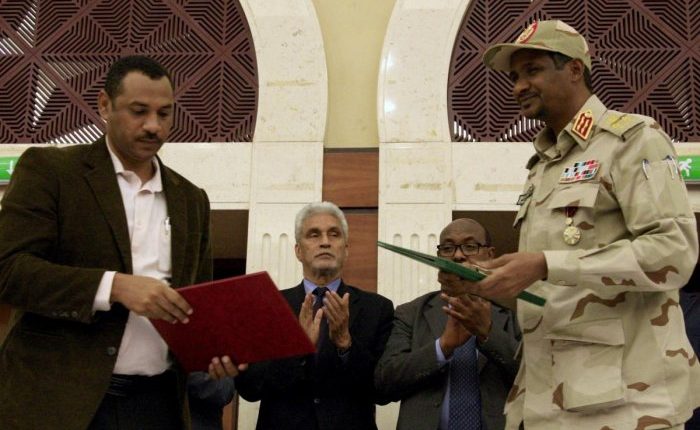 Sudan’s ruling military council and an alliance of opposition groups, on Wednesday, signed the first of two documents of a power-sharing deal that activists hope will pave the way for democracy in the country.

The two sides inked the “Political Declaration” in Khartoum in the presence of the African Union and Ethiopian mediators. It comes after overnight talks to iron out the final elements of the agreement.

The deputy chief of the Sudanese ruling military council, Mohamed Hamdan Dagalo, described the signing as a “historic moment.”

Ibrahim al-Amin, a leader in the opposition Forces of Freedom and Change (FFC) coalition, said, “We want a stable homeland, because we have suffered a great deal.”

“We are ushering in a new era. The upcoming government will be a government of all Sudanese, for all citizens,” he added.

The military and the pro-democracy movement agreed on 5 July to form a joint sovereign council that would rule Sudan until elections in 2022.

A military general is set to head the ruling body for the next 21 months, followed by a civilian for the remaining 18 months. The interim government will be comprised of six civilians and five military representatives.

Sudan has been in a state of flux since the former president Omar al-Bashir was ousted in April after large-scale protests against his regime.

Earlier this month, dozens were killed during opposition rallies against the military council. The protests were a direct response to the army’s use of brutal force against civilian protesters in June.

The FFC said, “Today, we completed the political declaration. For the constitutional document, we will resume talks on Friday.”