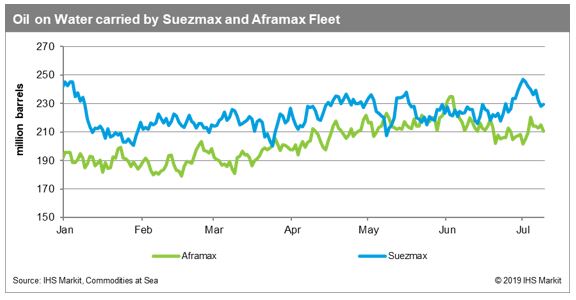 Oil prices have recovered significantly last week primarily due to the continued decline in US crude inventories.

According to a research note by IHS Markit, this suggests that supply has further tightened, especially in combination with increased risk of future disruptions related to the rising tension in the Arab Gulf.

As the real numbers exceeded earlier expectations, the market reacted by pushing oil prices higher, the note explained. Brent flirted with $68 per barrel, while West Texas intermediate surpassed $60 per barrel, the highest since late May.

Yet, the research note indicates that the current sentiment in the market seems to have changed, as stockpiles shrank by around 3.5% since reaching the highest level in almost two years in early June.

The declining inventories of the US, together with Iran’s rhetoric, have shaped expectations for tightening supply, even if this happens in parallel to higher concern about declining demand for crude oil.

For Egypt, the country is highly vulnerable to crude oil price fluctuations, as each $1 increase in the Brent crude’s price would cost the state EGP 4bn, according to the country’s finance ministry.

Furthermore, the movements in the oil prices have also been supported by earlier concerns that Tropical Storm Barry could impact crude production in the Gulf of Mexico.

However, crude oil prices have decreased after the weekend as Tropical Storm Barry weakened without any long-lasting disruptions in US infrastructure, according to IHS Markit.

According to data by IHS Markit’s Commodities at Sea, volumes of oil seem to have increased for very large crude carriers (VLCCs) since the beginning of this month having surpassed 625m barrels. Meanwhile, volumes on Suezmaxes, the largest oil tankers capable of transiting the Suez Canal, have been pushed marginally lower, while levels have been rather stable for Aframaxes, the oil tankers smaller than 120,000 metric tonnes.

Oil prices plunged to $59.12 per barrel on the back of increased US stockpiles