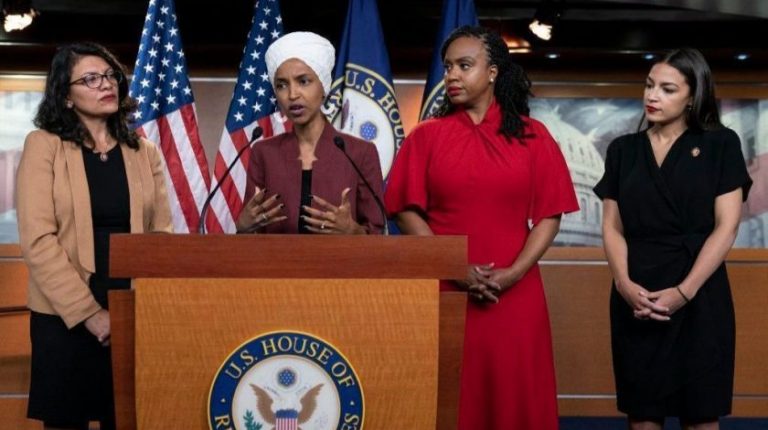 The United States House of Representatives formally condemned President Donald Trump for racist comments against four minority congresswomen of colour from the left-wing of the Democratic Party. This came three days after Trump’s tweet attacked the four congresswomen.

They strongly condemned Trump for his racist comments that have legitimised fear and hatred of New Americans and people of colour, Reuters reported.

The past several days witnessed a debate in Washington over Trump’s tweets, Tuesday’s debate in the Democratic-controlled chamber was a highly polarised debate, with various Republicans insisting the vote itself was a breach of decorum.

The symbolic measure passed by 240 votes to 187. Four Republicans and the chamber’s sole independent, former Republican lawmaker, Justin Amash, joined all 235 Democrats to approve the resolution.

After the voting, Trump responded on twitter using quotes from John Kennedy, the Louisiana Senator, “In America, if you hate our country, you are free to leave. The simple fact of the matter is, the four congresswomen think that America is wicked in its origins. I’m entitled to my opinion; I just think they’re left wing cranks.”

“The Democrats in congress are getting nothing done, not on drug pricing, not on immigration, not on infrastructure, not on nothing! So much opportunity, yet all they want to do is go “fishing.” The American people are tired of the never-ending witch hunt, they want results now!” Trump added.

Trump had been accused of racism and xenophobia, as he tweeted that the four congresswomen are viciously criticizing the US policy. He suggested that they “go back and help fix the totally broken and crime places from which they came,” on Sunday.

The women are Alexandria Ocasio-Cortez, Rashida Tlaib, and Ayanna Pressley, who were born in the US to immigrant families and Ilhan Omar, who came to the US as a refugee

Ahead of the vote Trump tweeted, “those tweets were not racist. I don’t have a racist bone in my body! This should be a vote on the filthy language, statements, and lies told by the Democrat.”

“Congresswomen, who I truly believe, based on their actions, hate our Country. Nancy Pelosi tried to push them away, but now they are forever wedded to the Democrat Party. See you in 2020.” he also added, if the congresswomen hate the US, or if they are not happy here, they can leave.

Topics: racist The United States House of Representatives US