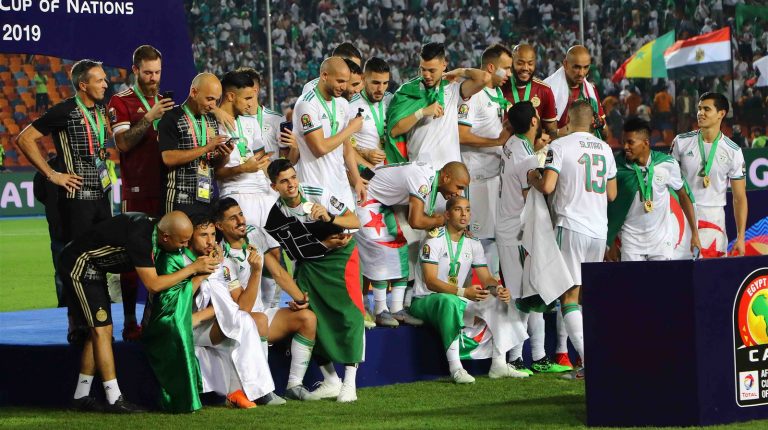 Algeria won their second Africa Cup of Nations (AFCON) title last Friday, bringing the golden trophy back to North Africa after nine years of absence since Egypt won the title in 2010.

The Desert Warriors crowned their first AFCON title in 1990.

Algeria won 1-0 over Senegal in the final, ending West Africa’s dominance of the continental championship, with Nigeria winning the tournament in 2013, Ivory Coast in 2015, and Cameroon in 2017.

Algerian star Ismaël Bennacer, 21, wrote his name in the football history of the continent after presenting a remarkable performance throughout the tournament winning the Man of the Match twice and the Best Player of the Tournament award.

Bennacer was born in Arles, France to a Moroccan father and an Algerian mother. He has three nationalities, Algerian, Moroccan, and French.

He had previously represented France at youth level, playing four games with U18 team and five games with U21 team.

In 2016, the Algerian Football Federation (FAF) announced that Bennacer had opted to switch his international allegiance and represent Algeria internationally. He debuted for the Algeria national team in a 2017 AFCON qualifier against Lesotho.

In the beginning, there was a conflict between the Royal Moroccan Football Federation and FAF over the young player but Bennacer chose to play for Algeria.

Bennacer began his professional career with French AC Arles and then moved to Arsenal in 2015.

He made his Arsenal debut in the League Cup on 27 October 2015. On 31 January 2017, it was announced that Bennacer would join Ligue 2 side Tours on loan for the remainder of the 2016–17 season. Now, he plays as a midfielder for Italian club Empoli.

Bennacer is the second Algerian to win the AFCON Best Player award after Rabah Madjer in 1990.

Algeria’s Rais M’Bolhi won the Best Goalkeeper award in the AFCON 2019. He was one of the most important players in the team. He presented a stunning performance throughout this tournament, with four clean sheets and only two goals conceded in seven matches.

M’Bolhi has now 15 AFCON appearances, beating former Algerian goalkeeper Mehdi Cerbah who was among the Algerian team crowned the AFCON title in 1990.

M’Bolhi was born in Paris, France to a Congolese father and Algerian mother.

In the beginning, he played for France U17 national team in November 2002. In June 2004, he received his first and only call-up to France U18 national team for a tournament in Salerno.

Then, he was called up by the Algerian U17 national Team but was not released by his club Olympique de Marseille. In May 2010, M’Bohli made his debut for Algeria in a 3–0 loss against Ireland after coming on as a second-half substitute.

He presented a remarkable performance with the Algerian national team in the 2010 World Cup in South Africa.

M’Bolhi started his career at 18 years old with RCF Paris. Then, he joined Olympique de Marseille, though he never made a league appearance before his release in January 2006.

A hysterical joy dominated the fans of Algeria after their win of the AFCON 2019 and took to the streets in Cairo to celebrate the historic victory.

Thousands of Algerians rallied in the streets and hundreds of Egyptians gathered to congratulate them for the winning the title.

Celebrations were also rocking Algeria and France where thousands gathered holding the Algerian flags. The 5 July 1962 Stadium in Algiers hosted 80,000 people to watch the game on large screens.

After the Desert Warriors won the AFCON title, the Egyptians launched several hashtags on social media congratulating the Algerians.

The Egyptian fans supported the Algerian national team, despite the long-time rift between the football of the two countries. The two countries are in North Africa, only separated by Libya, and football matches between them are fiercely contested local derbies.

The two teams were in Group C in the CAF section of the qualifying competition for the 2010 FIFA World Cup. In November 2009, the teams met in a one-game play-off to decide the qualifier at Al Merreikh Stadium in Omdurman which was selected by FIFA.

Egyptian news media ran many stories about attacks that allegedly targeted the Egyptian fans in Sudan. Al-Ahram, a state-owned Egyptian newspaper, reported that buses designated for Egyptian fans to be taken to the airport had been destroyed, forcing them to walk there under escort of the Sudanese army. According to Al-Ahram, Sudanese diplomats suggested “scores” of Egyptians had been attacked and “a few” hurt.

After Egypt’s loss of the match, the Egyptian Football Association (EFA) filed a complaint with FIFA against Algeria. The EFA indicated that “Egyptian fans, officials and players put their lives at risk before and after the game, under threat from weapons, knives, swords and flares.” The statement also threatened with the Egyptian football team’s withdrawal for two years from all international competitions as a sign of protest. On 18 May 2010, FIFA announced that the conditions for opening disciplinary proceedings had not been met and closed the complaint.

After 10 years of this incident, the Egyptian fans attending the AFCON final at the Cairo Stadium raised supporting banners for Algeria, some read “Algeria in the heart of Egyptians.”