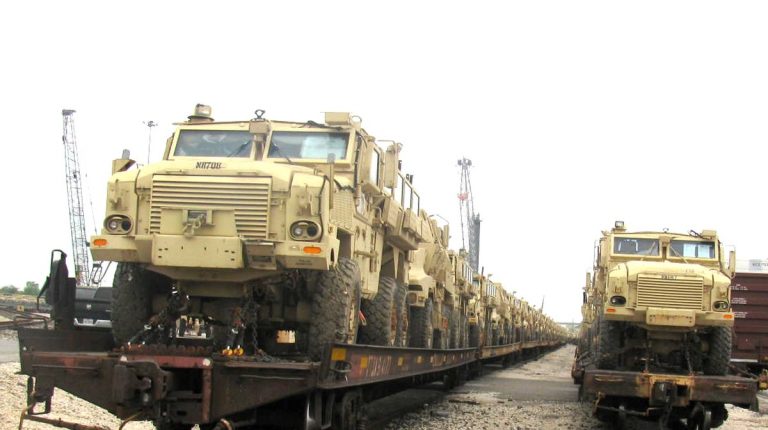 Under the programme of ‘Excess Defence Articles’ (EDA) affiliated to United States Defence Ministry which works to get rid of surplus military equipment and dedicates it to ‘friendly countries and allies,’ Egypt received 101 Mine-Resistant Ambush Protected (MRAP) armoured vehicles.

According to media statements out from US Security Assistance Command Country Programme Manager Shawn Arrance, these vehicles will be used by Egypt in the fight against terrorism and are part of a broad range of military cooperation initiatives between the two countries.

The sale also supports US national interests and continues to enhance Egyptian army capabilities by increasing the readiness of the country to defend its national sovereignty and regional stability, he said.

Through the above programme, the 101 MRAP vehicles are transferred with no cost to the Egyptian government while Egypt is only responsible for arranging the shipment of the EDA MRAPs from the Sierra Army Depot in California to Egypt.

The MRAP are considered a US military light tactical vehicles designed specifically to withstand improvised explosive device (IED) attacks, and the 101 MRAP are excess defence articles that are no longer in the US army’s power and are available for sale or grant to ‘friendly countries and allies’.

Egypt has submitted a request for an additional 1,000 MRAP vehicles that is awaiting approval.

Army and police forces in Egypt are engaging in a widescale militant operation launched in the presence of the Islamic State (IS) in North Sinai since February 2018. The operation aims to get rid of the IS affiliated group, ‘Sinai Province,” which was previously known as Ansar Beit Al-Maqdis, and became ‘Sinai Province’ in 2014, after declaring allegenace to the IS.

Since the start of the ‘Sinai 2018 Comprehensive Operation’, the rate of militant attacks conducted by the IS against the army, police, and civilians has declined due to many counter-attacks by the army against militants.

US delivers Egyptian Armed Forces a batch of MRAP vehicles