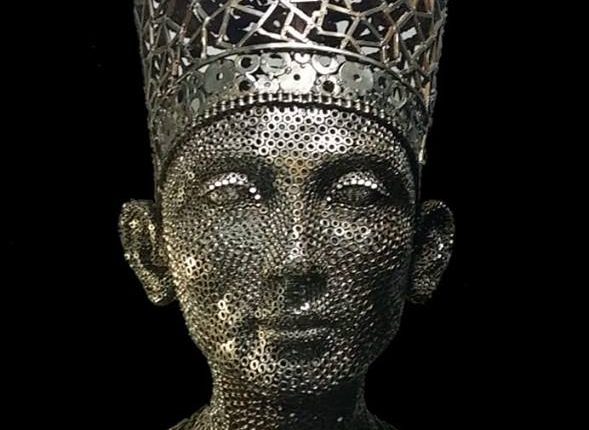 The alluring charm of ancient queen Nefertiti always captured the Egyptians’ hearts, and has been featured numerous times in various art works, yet having her face sculptured by iron scraps was a new method of documenting the queen’s beautiful face.

However, the mass attraction Nefertiti’s sculpture amassed, since it was highlighted on social media, opened a window to Hussein’s world which revolves around sculpture made of nothing but recyclable materials. The world Hussein dug into is all about reflecting beauty and making it shine, even if it was made out of trash. 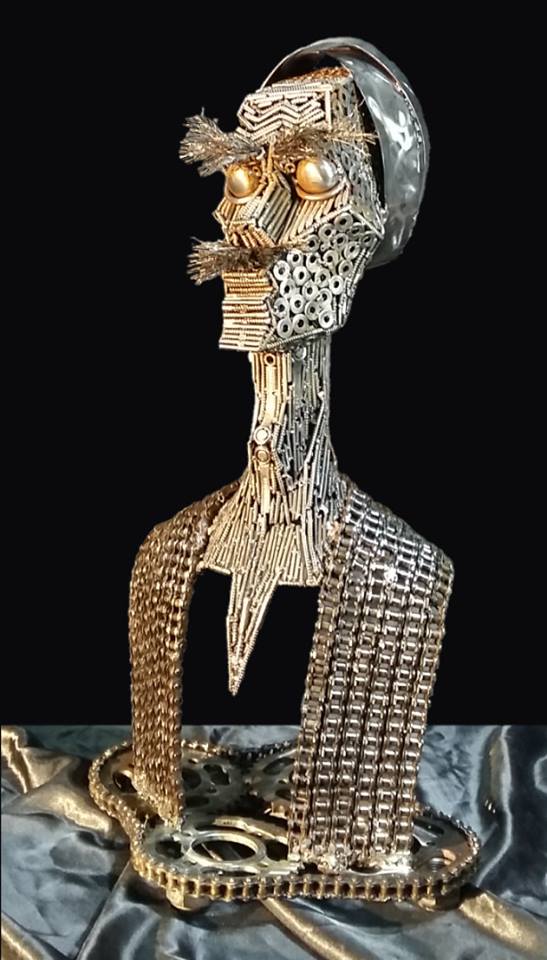 Veteran sculptor Hossam Hussein applied a modern vision of queen Nefertiti using a thousand pieces of iron scrap that he glued together. The sculpture depicts the queen with her calm gaze and the perfectly shaped lips.

Nefertiti’s sculpture – which went viral on social media due to its fascinating detailed artistry of the crown and the queen’s appealing features – took almost four months of continuous intense daily work.

“For the famous statue of Nefertiti, I used over 6,000 sleeve nuts and different shapes of thumb nuts,” he explained.

Yet the model which brought Hussein into the spotlight was not his only captivating sculpture, but rather Hussein’s showcasing of a competitive talent that cannot be missed.

Hussein usually spends a month or more to finish a sculpture. Yet with the human face details, it takes a longer time.

Growing up fascinated with all sorts of art, Hussein was always fond with sculptures, especially those of celebrities or historic figures.

“I believe art is all about conveying beauty through the simplest way regardless the tool used in art work,” Hussein told Daily News Egypt. Through decades, the sculptor used various materials, such as clay, wood, and finally iron scrap.

I learned iron carving online. It took me only few seconds to try using the new material in my work, he remembered.

Based in Zagazig, Sharqia governorate, Hussein is now one of a few artists in Egypt who master the art of sculpturing by melting heavy steel.

Although those materials are sold quite inexpensively, Hussein’s allocated budget for each model almost triples due to the use of welding substances and electricity.

“Each kilo of iron scraps costs me around EGP 5-7. I usually get them from wholesale traders who usually sell them to recycling factories. They need a lot of work to be used in sculpture,” he added.

Most of the artist’s sculptures are for sale, except very few he considers as “part of his soul.”