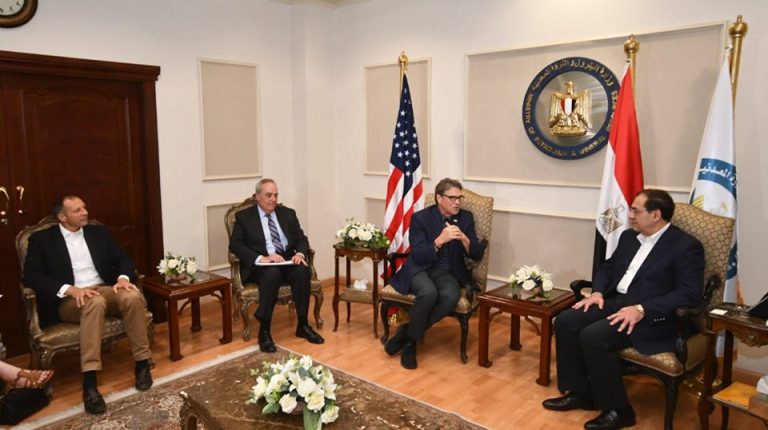 The Minister of Petroleum and Mineral Resources, Tarek El-Molla, held a meeting with the US Secretary of Energy, Rick Perry, and Assistant Secretary of State for Energy Resources, Frank Fannon, ahead of their participation in the preparatory meetings of the Eastern Mediterranean Gas Forum (EMGF), which will be held on Wednesday.

El-Molla pointed out that the participation of Perry in the forum as an observer,  is a clear and important indicator of the support of the United States of America, and that it would contribute to the achievement of the forum’s objectives.

The meeting will be attended by El-Molla, as well as oil and energy ministers in a number of Mediterranean countries, such as Cyprus, Greece, Jordan, Israel, Palestine, and Italy, in addition to the United States, represented by Secretary of Energy, Rick Perry. The European Union is also represented by the European Commission for Energy and Climate Affairs.

The preparatory meetings, with the participation of representatives of the seven members of the forum, will discuss the agenda of the ministerial meeting and the topics to be presented to the ministers.

El-Molla also emphasized that the positive changes witnessed by the oil sector in Egypt encouraged many major American companies to work and invest for the first time in Egypt in the oil and gas exploration, as ExxonMobil has acquired concession areas and seeks to expand this activity.

For his part, the US minister stressed the role of Egypt as a reliable source of energy, pointing out the US readiness to provide all the expertise and technologies to Egypt to enhance its natural position as an important energy hub in the region, and highlight Egypt’s role as a cornerstone of energy cooperation in the eastern Mediterranean. “There is a strong willingness and willingness of US companies to expand, invest and work in Egypt,” Perry added.

Furthermore, El-Molla also discussed with the Greek Minister of Environment and Energy, Kostis Hatzidakis boosting bilateral cooperation in the oil and gas field, during a meeting on Wednesday.

El-Molla said that the fact that Cairo is the permanent host for the newly found forum, confirms its centrality as a regional centre for trading of gas and oil, stressing that the distinguished relations between the two countries, can be seen clearly in the joint cooperation, especially in the field of oil and gas.

For his part, Hatzidakis said that the gas discoveries in the eastern Mediterranean region will contribute to the strengthening of economic and political ties between the EMGF countries and open up new aspects for further cooperation.

The forum includes Egypt, Cyprus, Greece, Israel, Italy, Jordan and the Palestinian Authority, other eastern Mediterranean countries and transitory countries may join the forum later, the ministry said at the time.

According to Hatzidakis, further cooperation between the region will be witnessed in the near future, consequently, that would spark the appetite of international oil companies to expand their exploration and production operations in the eastern Mediterranean.

“We are focusing on cooperation in the eastern Mediterranean, we are investing in cooperation with Cyprus, Israel, Egypt and the US, we believe we can boost the country’s position geostrategically and economically, with the energy and investment that can be made in this sector as a catalyst”, Hatzidakis told Greek media earlier.

EMGF paves the way for integration

A source in the oil sector told Daily News Egypt that the meeting would present the possibilities available to Egypt including pipelines and liquefaction plants that contribute to its transformation into a regional natural gas hub.

He pointed out that the forum will support producing countries by enhancing their cooperation with consuming and transitory parties in the region, taking advantage of existing infrastructure in Egypt and developing further infrastructure options to accommodate current and future discoveries.

Steinitz added that the deal to buy stakes in the East Mediterranean Gas Company’s pipeline between the two countries will be completed “within weeks” and that more connections could be built between them.

In September 2018, Delek Drilling and Noble Energy—the operators of Israel’s largest natural gas fields Tamar and Leviathan—and the Egyptian company East Gas Co have bought control of a pipeline to Egypt, paving the way for Israeli gas exports into Egypt.

The three companies signed a deal to buy 39% shares in pipeline owner Eastern Mediterranean Gas Co, according to a statement released by Delek Drilling at the time. The buyers will pay $518m, with Delek and Noble contributing $185m each, and the remainder being paid by East Gas.

Egypt holds the keys to the eastern Mediterranean’s gas future. The country aims to import natural gas to Israel and Cyprus to be transferred to Egypt’s two LNG plants in Idku and Damietta, and re-exported.

In the same context, a research paper by Thrassy N Marketos, titled “Eastern Mediterranean energy geostrategy on proposed gas export routes,” published by the Fondation pour la Recherche stratégique, concluded that for the EU, the materialisation of an eastern Mediterranean gas hub (understood as a crossroads of physical flows, not as a trading platform) based on Egypt’s LNG infrastructure would be beneficial for both energy policy and foreign policy considerations.

“The EU is an observer of the EMGF not a member so far. we will announce a certain financial support for the EMGF next week as a symbolic amount of funds to support the regional cooperation in gas and energy,” Ivan Surkoš, head of the EU Delegation, told Daily News Egypt last week.

Establishing the EMGF is crucial for the EU because Europe depends on Russian gas, and the east Mediterranean gas will be a convenient alternative source of energy for Europe, he clarified.