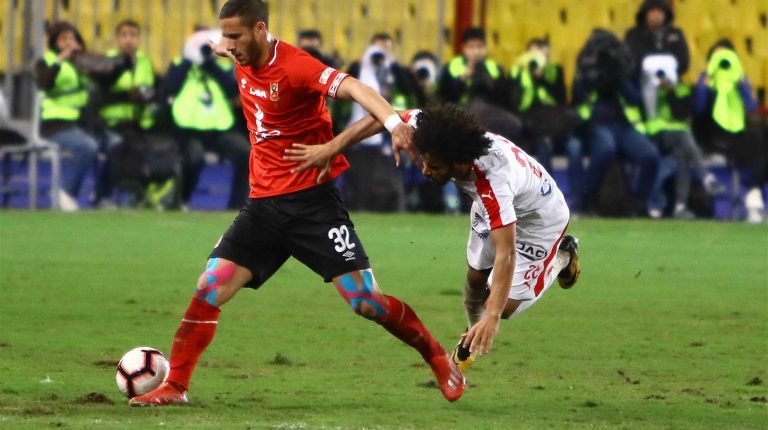 The longest Egyptian Premier League season will come to an end on Sunday when Al Ahly meet Zamalek at Alexandria’s Borg El Arab Stadium in a strong but pointless derby after the Red Devils secured the league title last Wednesday with a 3-1 win over Al Mokawloon Al Arab. Al Ahly have extended their record of league titles to 41 with this year’s triumph.

The result put Al Ahly five points clear of their great rivals Zamalek. However, the Egyptian Classico is always a special encounter no matter the situation of both teams, with each side aiming to prove its dominance over the Egyptian football.

This Egyptian league season had been delayed repeatedly for several reasons, most lately for the recent Africa Cup of Nations hosted by the country from 21 June to 19 July.

Al Ahly lead the league table with 77 points, while Zamalek is second with 72 points, meaning that each of them will participate in the next CAF Champions League.

Al Ahly entered in a closed camp in Alexandria after beating Al Mokawloon. The team’s coaching staff, led by Uruguayan Martín Lasarte, advised the players to postpone their celebrations until they play Zamalek.

The White Knights are also intensively preparing for the game as the players realise that beating Al Ahly will ease the distress of losing the league title to their rivals and will give them a big boost before the start of the new season.

We expect an exciting match as both teams have nothing to lose. The league’s first-round match between Al Ahly and Al Zamalek ended in a goalless draw and saw poor performance from both teams, but the coming match will be different.

The 118th Cairo derby coincides with the summer transfer window in which all teams are in race against time to sign high-quality players to strengthen their squads in preparation for the new season.

Amir Mortada Mansour, the supervisor of Zamalek’s football team, is exerting great efforts in this regard. He called on the team’s stars to focus and win the Sunday match to reconcile the angry fans after losing the league title.

Meanwhile, Zamalek has decided to terminate the contracts of the coaching staff, led by Khaled Galal, after the Sunday match, due to losing the title race.

Galal took charge of Zamalek succeeding Swiss Christian Gross whose contract ended in May. Galal led the White Knights in three matches; a win over Ismaili and two draws against Haras El Hodoud and El Gouna.

In the CAF Champions League, Al Ahly will face South Sudan’s Atlabara in the preliminary round, while Zamalek will be playing against Somalia’s Dekedaha.