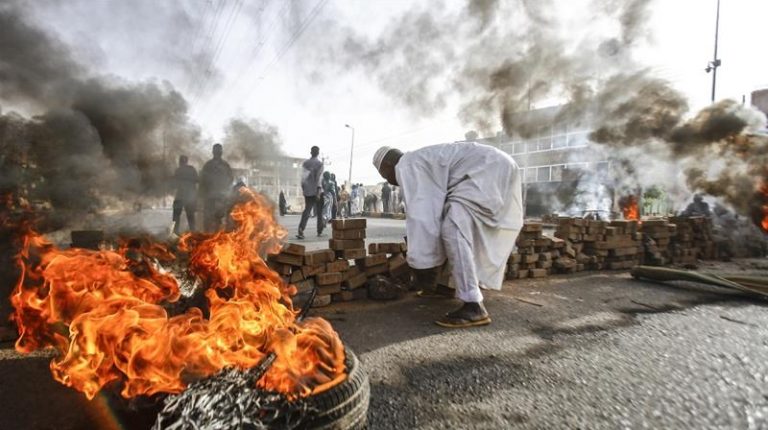 At least eight senior Sudanese officers are accused of committing crimes against humanity in the bloody crackdown to the protesters sit-in, in May, according to the results of an investigation committee formed by the country’s prosecution and mandated by the military council.

During a press conference on Saturday, Fath Rahman Saeed said that two officers with ranks of General and Brigadier-General led the sit-in dispersal.

The committee outlined that semi-military units belong to the rapid support forces (RSF) were involved in the bloody crackdown without being officially ordered to did so.

The committee added that 87 people were killed, while 168 others were wounded during the dispersal, adding that 48 of those wounded people were shot with live ammunition.

However, the Central Committee of Sudan Doctors (CCSD) stated that more than 127 protesters were killed and 500 others were wounded.

The committee also revealed that several security forces indiscriminately and intensively shot protesters during the dispersal.

In response, the Declaration of Freedom and Change Forces (DFCF) rejected on Saturday the results of the investigation committee, asserting that it previously insisted from the beginning to form an independent committee to investigate “the sit-in dispersal and the massacre that resulted in it.”

The DFCF said that it rejected the results because the committee was mandated by the Sudanese Transitional Military Council (TMC) as the council itself is accused of this crackdown. Meanwhile, the DFCF also denounced that the committee did not mention the full names of officers accused of violence, noting that investigators should not hide their identity or refer to them with only the first letters of their names.

In May, security forces violently dispersed the Khartoum sit-in, held outside the military headquarters, killing and injuring hundreds according to opposition figures. The military admitted dispersing the sit-in.

Some reports say that a number of bodies have been dumped in the river Nile.

Following the crackdown, the United Nations Special Representative on Sexual Violence in Conflict, Pramila Patten, called for deploying teams to Sudan to investigate the involvement of Sudan’s militias and RSF in rape incidents.

Patten said that incidents, “include reported rapes and gang rapes of protesters, women’s human rights defenders, and female medical personnel working in hospitals near the sit-in perpetrated by the RSF.”