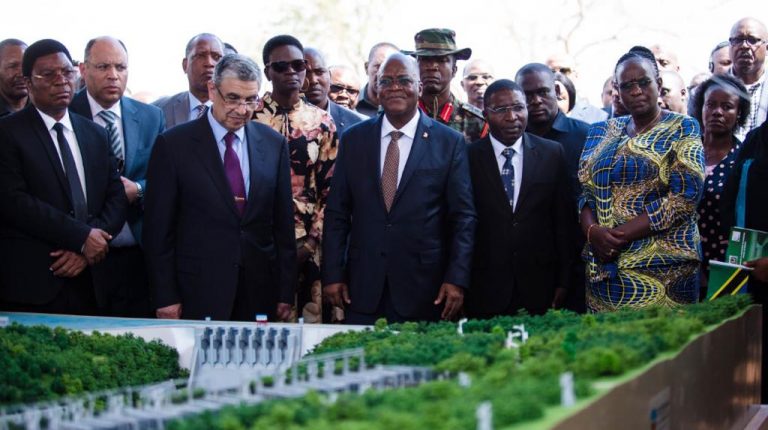 The ceremony was attended by Egypt’s Minister of Electricity Mohamed Shaker and the Egyptian ambassador in Tanzania, in addition to high-profile officials from both countries.

The new dam will be implemented by the Arab Contractors and El Sewedy Electric in Morogoro region on the Roveji River. The construction works are estimated to last for 42 months, including six months to prepare the site.

The hydroelectric dam will produce up to 2.1GW to secure Tanzania’s needs of energy and store floods’ water. The dam project extends over 1,025 square metres and 130 metres high.

“Beginning today, this will indicate that Tanzania is an independent country … not a poor country,” Magufuli said, expressing hope that the project will boost industrial development. “It’s time to benefit from our national resources.”

The project includes the establishment of four water storage dams with lengths of 1.4km, 7.9km, 4.6km, and 2.6km. The total expected water supply will be 33bn cubic metres. The construction works will start in next January and will open in 2022. It costs a total of $2.9bn and will employ 5,000 engineers and workers.

During the ceremony, Tanzania’s Energy Minister said that the dam’s construction will take three years to complete.

The Tanzanian government has allocated $307m for the construction of the Stiegler’s Gorge hydroelectric plant, representing over 40% of the country’s proposed budget for the fiscal year (FY) 2018/19.

The new project is expected to provide power for the country’s emerging industries, with plans to export its surplus to other East African countries. Upon completion, the dam will be fourth-largest in Africa and ninth in the world.

In August 2018, President Abdel Fattah Al-Sisi visited Tanzania in a four-day tour to four African countries, including Rwanda, Gabon, and Chad, as part of Egyptian eagerness to boost its relations with other African countries.