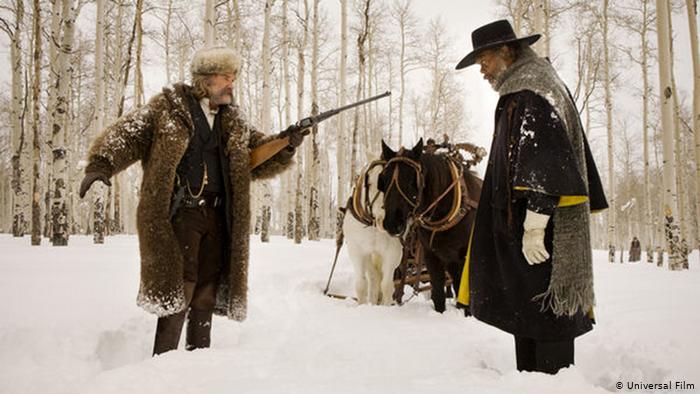 The cult director is back with a tribute to the film industry: As Once Upon a Time in Hollywood hits theaters, here’s a look into Quentin Tarantino’s works.

But Pulp Fiction was not the director’s debut movie. After his very first film, My Best Friend’s Birthday, was partially destroyed and lost in a fire in 1987, Tarantino directed his official first feature, Reservoir Dogs. Upon its release in 1992, the film already showed signs of Tarantino’s essence: plenty of dialogue, shot through with witty humour, alongside violent scenes.

Three years after his worldwide hit Pulp Fiction, Tarantino came back with Jackie Brown in 1997. The story revolves around a flight attendant (Pam Grier) who gets involved in criminal activities to make ends meet. The movie gave the impression that the director was heading into a calmer and mellower period: Jackie Brown is a portrait of a grown-up woman.

Tarantino’s next film, the action and violence-filled Kill Bill, was quick to change that perception. The movie was split in two volumes, released in 2003 and 2004, due to its length of more than four hours. The film featured Uma Thurman as its main protagonist, a decade after she starred in Pulp Fiction. Tarantino has often referred to the blonde US actress as his cinematic muse.

Tarantino’s next feature film was an homage to the US cult exploitation films of the 1970s. The main protagonist, a stuntman played by Kurt Russell, cruises the American countryside in his tricked-out Chevrolet, killing people in staged car accidents. This continues until he crosses paths with a gang of girls who end up being even more brutal than he imagined.

Tarantino surprised his fans with Inglourious Basterds in 2009, taking on a historical topic for the first time. But it still had all of Tarantino’s trademarks, blending violence and humour. Set in Europe during World War II, it offers an alternate version of history with its plots to assassinate Nazi leaders. Christoph Waltz shot to stardom after his role as SS Colonel Hans Landa.

Tarantino’s second Western after Django Unchained is set in the snowy mountains and forests of the US state of Wyoming. The Hateful Eight unfolds in full traditional Tarantino fashion: quickly paced, with extensive dialogue and a soundtrack written by Italian composer Ennio Morricone, which earned the influential Italian composer his first Academy Award.

It is a film-in-a-film story starring Leonardo DiCaprio in the role of a faded TV actor, and Brad Pitt, his stunt double. The two of them set out to achieve fame in Hollywood during the Charles Manson murders in 1969. Tarantino has often claimed that he would retire after 10 films, so this ninth work is seen as his penultimate.

Topics: Once Upon a Time in Hollywood Pulp Fiction Tarantino