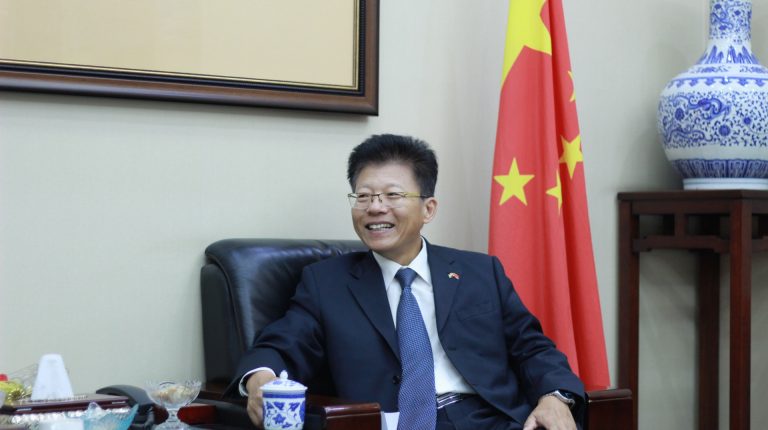 “Egypt is an opportunity for investment and several Chinese companies are remarkably increasing their investments while others are entering the market for the first time,” he added.

China EximBank discussed with Egypt’s Ministry of Transport the conditions of disbursement of the first tranche of the Chinese loan to the light railway, Bing shared.

“The total amount of the China EximBank’s loan to the light railway is about $1.2bn. I think that the first tranche will be delivered to the Egyptian side within one month,” Bing said.

Daily News Egypt interviewed Bing to learn more about the updates of the Egyptian-Chinese economic and trade relations, the transcript of which is below, lightly edited for clarity:

How do you see Egypt’s New Investment Law? And how will it reflect on the Chinese investors’ interest in the Egyptian market?

For Chinese companies, they see Egypt as an opportunity for investment and several Chinese companies are remarkably increasing their investments while others are entering the market for the first time. There are several big projects under consideration for investment in Egypt in the sectors of textile, steel, and leather manufacturing. There are also other plans from Chinese companies to invest in Egypt. The projects need special attention from the Egyptian government to support them with incentives, due to their high value added to the Egyptian economy, especially in terms of offering many job opportunities to Egyptian youth. We hope that the local authorities will support the new Chinese investments.

On 7 July, parliament approved the amendments of the New Investment Law which included incentives to the international companies already investing in Egypt when injecting investments in the neediest areas, according to a DNE’s past report.

Will any of the Chinese companies inject new investments in the New Administrative Capital (NAC) shortly?

There are about three Chinese companies that are in discussion with the Egyptian authorities regarding injecting new investments in the NAC. Yet, nothing is concluded yet. 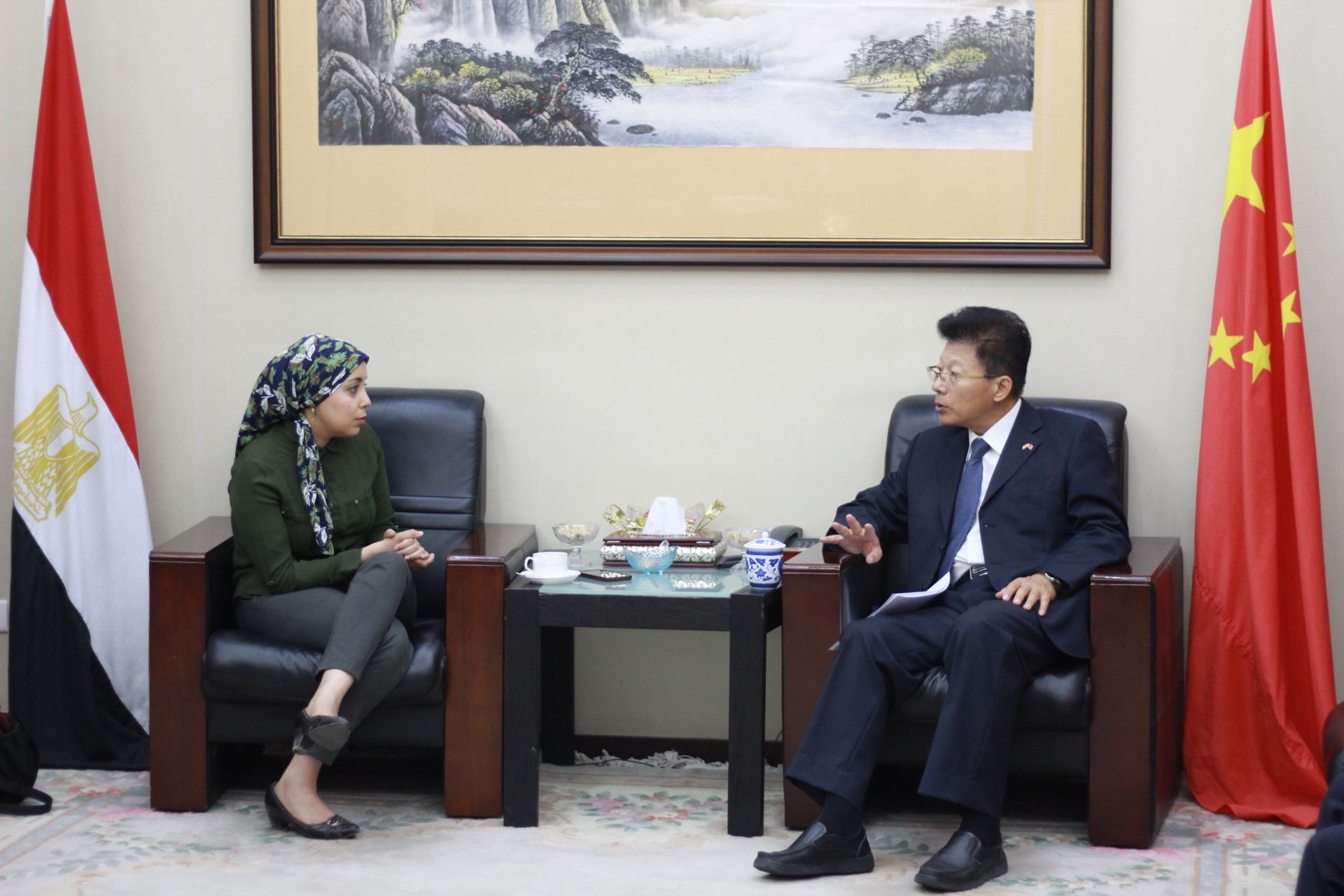 The new investments in TEDA zone in Ain Sokhna are quite attractive. For TEDA’s expansions zone, there are already eight projects under construction, one of them will start a motorcycles’ production this year. Hopefully, next year, the other seven companies will go on line. The amount of investment of the companies in TEDA expansions is about several hundred million dollars.

Egypt’s Minister of Electricity announced that the Hamrawein power plant contracts will be signed soon, do you have any specific timing for inking these contracts?

Backgrounder: ‘On 2 July, Egypt’s Minister of Electricity and Renewable Energy, Mohamed Shaker, said that his ministry is finalising the contracts of Hamrawein power plant project to be signed with a Chinese partner soon. Hamrawein is a key project that will be implemented with over $2bn in costs, the minister declared, noting that his ministry is working hard to diversify the energy resources and add capacities to the network in order to supply the electricity needs.’

What about the Chinese business missions that will visit Egypt in the second half of 2019?

We will receive a delegation at the end of July, consisting of about 20 companies that are looking for new investment and trade opportunities. We will organise a match making meeting with the Egyptian Business Association (EBA) to discuss the future plans with Egyptian counterparts. Earlier in July, we received one delegation from Chinese pharmaceutical companies where they met with the Export Council of Medical Industries and other medical and pharmaceutical stakeholders in Egypt. More than 10 Chinese companies met with about 20 Egyptian companies and discussed cooperation in trade and also the possibility of investing.

Will this Chinese delegation meet with any Egyptian officials?

The delegation will pay a visit to the General Authority for Investment and Free Zones (GAFI). The Egyptian government participated in the China-African economic and trade expo last month where Egypt was a guest of honour. The Minister of Tourism Rania Al-Mashat visited China to participate in the expo along with a number of Egyptian companies and representatives from GAFI. The Egyptian delegation was very satisfied with its participation in the event. GAFI’s representatives who participated in the China-African economic and trade expo met with Chinese companies for investment promotion to the Egyptian market.

What is the size of trade exchange between Egypt and China?

The trade exchange between Egypt and China recorded $5.42bn in the first five months of 2019. China exported $4.68bn and imported $0.56bn from Egypt from January to the end of May 2019. By end of 2019, we hope that we will be able to achieve a peak of trade exchange. Last year, trade exchange recorded about $13.87bn. The trade exchange will further hike after the production of black sand mining that will be exported to China. This can be one of the main export products from Egypt to China.

Do Chinese financial institutions plan to sign any new deals with Egypt soon?

The China Development Bank (CDB) has about $5bn involvement in the Egyptian market now representing the current portfolio of the bank in Egypt including the financial cooperation with Egyptian banks and the loans to Chinese investors in Egypt. Financial cooperation between both countries is very good.  About $7bn is injected to Egypt’s financial system from Chinese financial institutions. As I said, China EximBank discusses with Ministry of Transport the conditions of disbursement of the first tranche of the Chinese loan to the light railway.

What is the amount of the first tranche?

What is your expectation of Chinese tourist numbers to Egypt?

Last year, Egypt received about 400,000 Chinese tourists. Hopefully, the numbers will increase by the end of 2019 to about 500,000. There were many Chinese inquiries about tourism in Egypt from the Chinese participants in the China-African economic and trade expo. Now there are many charter lines from China to Egypt which will surely reflect on more positive figures by year-end.

What about US-China relations?

China and the US are each other’s largest trading partners and important source of investment. In 2018, bilateral trade in goods and services exceeded $750bn, and two-way direct investment approached $160bn. China-US commercial cooperation has brought substantial benefits to both countries and both peoples. According to China customs, trade in goods between China and the US grew from less than $2.5bn in 1979 when the two countries forged diplomatic ties to $633.5bn in 2018, a 252-fold increase. In 2018, the US was China’s largest trading partner and export market, and the sixth largest source of imports. According to the US Department of Commerce, in 2018 China was the largest trading partner of the US, its third largest export market, and its largest source of imports. China is the key export market for US airplanes, soybeans, automobiles, integrated circuits, and cotton. During the 10 years from 2009 to 2018, China was one of the fastest growing export markets for American goods, with an annual average increase of 6.3% and an aggregate growth of 73.2%, higher than the average growth of 56.9% represented by other regions in the world. Trade in services between China and the US is flourishing and highly complementary. The two countries have conducted extensive, in-depth, and mutually-beneficial cooperation in tourism, culture, and intellectual property. China is the largest destination for US tourists in the Asia-Pacific and the US is the largest overseas destination for Chinese students. According to Chinese figures, two-way trade in services rose from $27.4bn in 2006, the earliest year with available statistics, to $125.3bn in 2018, a 3.6-fold increase. In 2018, China’s services trade deficit with the US reached $48.5bn.

How will the additional tariffs from the US reflect on joint relations?

The US administration has imposed additional tariffs on Chinese goods exported to the US, impeding two-way trade and investment cooperation and undermining market confidence and economic stability in the two countries and globally. The US tariff measures led to a decrease in the volume of China’s export to the US, which fell by 9.7% year-over-year (y-o-y) in the first four months of 2019, dropping for five months in a row. In addition, as China has to impose tariffs as a countermeasure to US tariff hikes, US exports to China have dropped for eight months in a row. The uncertainty brought by US-China economic and trade friction made companies in both countries more hesitant about investing. China’s investment in the US continues to fall and the growth rate of US investment in China has also slowed down. According to Chinese statistics, direct investment by Chinese companies in the US was $5.79bn in 2018, down by 10% y-o-y. In 2018, paid-in US investment in China was $2.69bn, up by only 1.5% y-o-y compared with an increase of 11% in 2017. With the outlook for China-US trade friction unclear, the World Trade Organisation has lowered its forecast for global trade growth in 2019 from 3.7% to 2.6%. In response to the economic and trade friction started by the US, China has been forced to take countermeasures, as bilateral trade and investment relations took a hit. For the well-being of the Chinese and American people and the economic development of the two countries, both sides deemed it necessary to come to the negotiating table to seek a solution through consultation. Since they were launched in February 2018, economic and trade consultations have come a long way with the two sides agreeing on most parts of the deal. But the consultations have not been free of setbacks, each of them being the result of a US breach of consensus and commitments, and backtracking. China had advocated resolving economic and trade friction through negotiation and consultation from the start. In early February 2018, the US government expressed its wish that China would send a high-level delegation to the US to engage in economic and trade consultation.