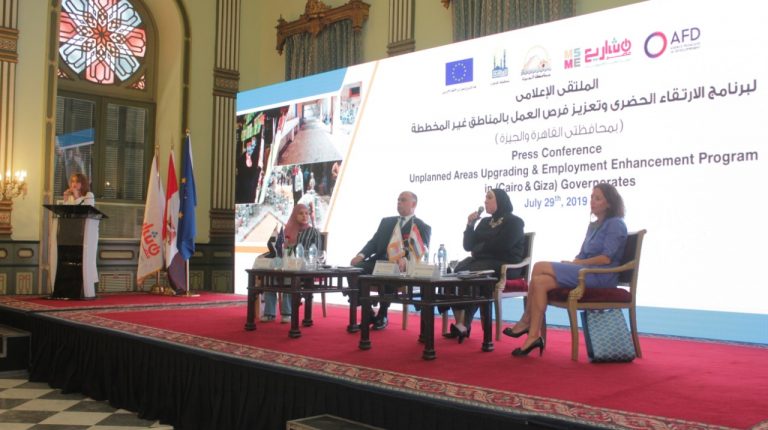 It comes during a media forum organised by MSMEDA to review its recent activities.

According to Gamea, the agency has started carrying out the urban development projects in the unplanned areas of Egypt since January 2017, with the aim of improving the life quality in four target neighbourhoods, namely Zawya Al Hamra and Ezzbet KheirAllah in Cairo, along with Ard Ellewa and Mit Okba in Giza.

They also included craft training programmes, where 70 women were trained on plumbing works in Giza, in the framework of spreading the culture of saving water. Further training programmes on solid waste recycling, handicrafts, sewing, and computer are under preparation.

Gamea said MSMEDA has succeeded since its inception in 1992 in providing EGP 6.4bn worth grants to implement labour-intensive projects in the field of infrastructure, community development, and training, which provided about EGP 82.4m daily salaries.

Gamea explained that the urban development programme and the promotion of employment opportunities in the unplanned areas is one of the ambitious initiatives adopted by the MSMEDA, which manages and implements the programme’s activities in Cairo and Giza and funded by the French Development Agency through a grant from the European Union.

“It is part of the national economic programme, launched by President Abdel Fattah Al- Sisi, to develop informal housing areas,” she said.

The programme, she described, is a model for the integration of development efforts to address the phenomenon of poverty and unemployment in these areas through the implementation of development projects, including renovation of water and sanitation networks, paving roads, lighting of streets, and the rehabilitation of schools and health centres.

Gamea stressed that the public, community, and human development projects are among the strategic axes of the agency, which aim to improve disadvantaged areas and provide employment opportunities for youth.

She pointed out that the urban development programme and the promotion of employment opportunities in the unplanned areas provide a model for the development of more advanced future programmes, in which the various inputs integrate to the development of the target areas in Cairo and Giza through the integration and interrelationship of microenterprise support activities, lending and financial facilities, and technical support for non-financial services. This also comes in the framework of the Egypt Vision 2030.